As the first day of June arrives, the general consensus here in Turkey Hollow, is that May was one of the coldest in quite some time. The sky spit down the last hours of snow, just about mid-month, much to everyone's dismay. 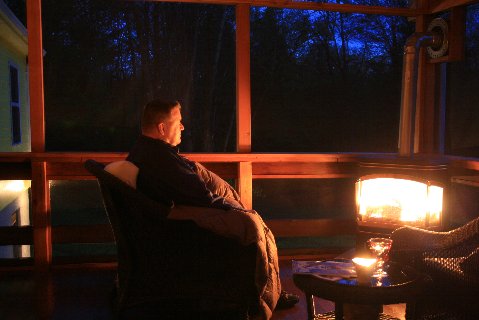 So it is with arms open to the newly clear sunny sky that I welcome summer. Nearly overnight, the drab mid-season mud has become a forest lush with vivid greens. Dotted on top of well-watered fauna are white, orange, purple and blue wildflower blossoms. I can hear wildlife prancing invisibly behind a green forest curtain, until they are ready to step into the spotlight of the clearing. This wonderful spring, the adage has evolved into "May showers bring June flowers" and I finally have the chance to drink in all the incredible beauty of a new season in the country.

At night as I sit on the huge screened porch at twilight and watch the sun drop over the hills, I can't help but reminiscence about my childhood summers in Elmer, New Jersey.

It's impossible to count how often the family gathered on the porch, in the perfect stillness of glowing sunsets, and partook in the family tradition of telling stories. Passed down from generation to generation, storytelling was an art in my family. My Grandpa Grove (who we nicknamed "Buzzard Bait"!) would regale us of stories from the Seven Mountains. Now, in my youth, I believed every word Grandpa Grove had to say and never could figure out why his tales would solicit guffaws from all the adults. After all, I knew this masculine, cigar-puffing, big man in bib overalls, was capable of any feat he spoke of! The man could barely write his own name but he alone was a poet of spinning tales of "good ol' times" and family lore. No one was more captivating than ole Buzzard Bait!

As the sun went down in the evening, my brother and sister and I would set out to capture glowing lighting bugs that had emerged in the fields. I made certain to line the bottom of my jar with grass, as to make my brilliant prisoner more comfortable. The warm summer nights elicited laughter and joy as we ran creating our lanterns of nature. As far as the eye could see, the fields were mysteriously lit by the floating bugs to awesome effect. Mom would always insist that we release our captives at the end of the evening so the magic could continue.

Often we would eat outside on the porch. Sometimes Dad came home early from working Mr. Seabrook's farm and mom had the day off so the night would be a special evening. My family lived off the land and summer evening meals featured baked stuffed tomatoes, potato salad, corn on the cob, fresh shelled peas and homemade ice cream with strawberries from our garden. With no air conditioning in those days, the cool porch was the center of our universe after the scorching days. Late in the afternoon, we would hose down the heated porchboards to freshen up our nightly gathering spot.

Nature never failed to entertain on those summer evenings. If the lighting bugs were scarce, we would know that a storm was on the way. Since we could see across the flat fields of crops, the storms would always announce their arrival long before reaching us. My family and I would watch the western night skies become jagged with lighting strikes hitting the ground, knowing soon the storm would be right over us. There was such a strong anticipation of how violent and glorious the thunderstorms would be by the time they reached us. Often we would have to run into the house when the shady trees surrounding our land would draw a strike. None of us were eager to prove Ben Franklin's theories!

Then it would be off to bed. I had old bunk beds that my dad got from Seabrook Farms. They were first used by German Prisoners during World War II, who were sent to work the farms during the War. The metal beds with their thin mattresses could easily be used as a jungle gym and I loved them. I had them to myself and with the big wide windows open in my bedroom, the sounds of the crickets would sing me to sleep.

Sitting on my porch in Turkey Hollow, I have to laugh.....look who's now become Buzzard Bait?