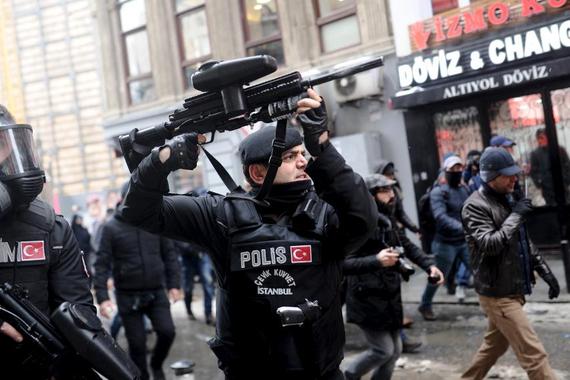 Only two decades ago, everything Kurdish was a taboo. Breaking it had predictable consequences. Leading Kurdish lawmaker Leyla Zana, for example, had to spend ten years in prison for her political activism. Ahmet Kaya, a renowned singer, had to leave Turkey for singing in Kurdish. Local media reported that many Kurdish were allegedly thrown into acid wells for demanding more rights and freedoms.

The rise of the PKK, a Kurdish rebel group, in the early 1990s was brutal. Militants terrorized civilians in southeastern Turkey. They ambushed conscripts and killed them in summary executions. It financed itself through extortion and smuggling. The Turkish state's response to quell the uprising in predominantly Kurdish populated provinces was similarly violent. Entire villages were burnt to the ground. Anyone sympathized with the rebel group was tortured in prisons notorious for their ruthless guardians. A para-military group called JITEM was a nightmare for Kurds: unresolved murders, kidnappings, disappearances.

These taboos were broken when the Turkish government launched a peace process with Kurdish militants. A peace statement by their jailed leader, Abdullah Ocalan, was recited during a spring festival in 2013 and broadcast live on Turkish TV channels. The two-year cease-fire gave the PKK a much-needed respite. It replenished its resources, nursed its wounds and built arms. The security forces tolerated the build-up of the PKK in urban areas to preserve the peace process.

Erdogan had been aiming for Kurdish help for his presidential ambitions. Even those who backed the peace process were suspicious of the Kurdish intentions. They feared that Kurds are bargaining their rights in return of a support for Erdogan's presidential bid. Just months before the elections last summer, the Kurds and the government fell apart. Kurdish surge in elections ended all hopes for the peace process.

Since then, hundreds of people from both sides were killed in escalating violence. Entire Kurdish towns and districts came to a complete standstill in unending curfews. The pro-Kurdish party, the HDP, was squeezed from every corner. Many of its mayors were thrown into jail. Its top leadership is facing criminal charges. Hardly could they hold peaceful rallies even during electoral campaigning. Poor showing in repeat elections cast shadow over their strength as kingmakers.

While the unceasing violence continues killing civilians from left to right, condemning it is a new taboo. No matter if you're a politician, an ordinary teacher, a journalist or an academic, you will face consequences if you speak up.

Ayse Celik... a woman who identified herself as a teacher in Diyarbakir, the biggest Kurdish city, phoned a famous TV show called Beyaz.

"Are you aware of what is going on in the southeastern part of the country? What we are facing here is being shown in a very different way on TV channels. Please do not remain silent. Show some kind of sensitivity as a human being. Hear our voice, see us, lend a helping hand for us. Don't let people die, don't let babies die and don't let mothers cry."

How dare you?! The woman's outcry kicked off the censorship mechanism.

The Education Ministry questioned three teachers named Ayse Celik the next day. The Kanal D, the TV network that airs Beyaz Show, launched an investigation into the call. Beyazit Ozturk, host of the show, apologized for the "incident."

The TV channel and the host immediately became a target of pro-government media and Twitter trolls. They were accused of spreading propaganda for the PKK. Some even called Ozturk a traitor.

In the face of mounting criticism, the channel said in a statement "we stand by our state."

Erdogan, who previously blasted anyone who rejected recognizing the Kurdish issue, is now telling a different story. Famous for his flip-flops, Erdogan refused to recognize that Turkey has a problem with its sizable Kurdish minority.

Once seen as a glimmer of hope for possibly granting long-denied rights and liberties of Kurds, Erdogan is now embracing a state narrative, the one that had been alienating Kurds. Criticizing the state has returned as a taboo.

1,128 academics... concerned citizens who signed a declaration to call for an end to the violence in the Southeast.

How dare you?! Erdogan promised a punishment, called them a force for dark and evil. A day after his attack, Turkish police started to round them up. Dozens of them were detained and questioned. Many of them lost their jobs, many are now a subject of an investigation.

Both the US and the EU denounced the crackdown on academics, calling on Turkey to live up to its democratic values. Will Turkey listen?

Tahir Elci... a prominent lawyer who said during a live TV broadcast that he does not consider the PKK as a terrorist organization.

How dare you?! A mafia boss sued him. Few weeks later, he was shot in the head in a broad daylight. No one still knows who killed him. He was silenced. Clear and simple.

140 activists... Young, promising and peaceful activists. Their only demand was the peace. A lasting one. The one that helps Turkey move forward in consolidating its democracy.

How dare you?! All of them were blown into pieces. The state failed to protect its citizens.

A student, an activist, a lawyer or an academic... Speaking up for Kurdish rights is now a new taboo.