ISTANBUL -- In September 2011, Turkey's then prime minister Recep Tayyip Erdoğan was greeted at Cairo airport by members of the Muslim Brotherhood who cheered him as his cortège moved along a road covered by billboards with his image. While there, Erdoğan gave a speech at the Cairo Opera House in which he talked about his vision of the Middle East.

"Now, in this transitional phase in Egypt, as well as in what comes after it, I believe that the Egyptians will establish democracy very well, and they will see that a 'secular state' does not mean 'an irreligious state,'" he said during an interview with Mona El-Shazly on Dream TV. "Rather it means respect for all the religions and giving all individuals the freedom to practice religion as they please."

At the time Erdoğan's words sent shockwaves among Muslim Brotherhood figures who were opposed to the separation of state and religion. Brotherhood figures expressed anger at the promotion of Turkey's secular system and even issued a statement in which they characterized Erdoğan's speech as "interference" in Egypt's local issues.

The idea of a secularism-free constitution brought out many of the fears and anxieties among Turks and produced a somewhat awkward consensus among Turkey's much divided civil society.

Five years on, Erdoğan's words have gathered new significance. Last week, the Turkish parliamentary speaker told a crowd in Istanbul about how he would like his new Turkish constitution: one that does not name-check secularism and has more religious content -- a religious constitution. The speaker's recommendation of removing the word "secularism" from the Turkish constitution produced the same amount of anger Erdoğan's recommendation of including secularism in the Egyptian constitution had created in Cairo. A committee is currently drafting a new constitution in Ankara. The idea of a secularism-free constitution brought out many of the fears and anxieties among Turks and produced a somewhat awkward consensus among Turkey's much divided civil society about the necessity of keeping the word "secularism" in the constitution.

Secularism is, after all, firstly a word. Its meaning has changed over time. It is a word with numerous connotations in Turkey, and with a fascinating, protean history. Turks have admired and critiqued secularism in equal measure. Often the greatest supporters of secularism have been those who critiqued it the most. Just take Turkey's Alevi groups: mostly associated with left-wing movements, Alevis, a religious minority in the country, say the Turkish state has never been truly secular and that through its directorate of religious affairs, it has supported and promoted a Sunni version of Islam, which is not becoming of a truly secular state. And Turkey's atheists? Well, they have also found numerous faults with Turkish secularism. Many are opposed to the existence of the declaration of one's religion on Turkish identity cards, which for decades have been formatted to note one's gender and religion. Atheists also complain about facing death threats and discrimination, which they see as related to this imperative to publicly declare their beliefs about religion.

Turkish Jews and Christians will tell you how a so-called "wealth tax" had been levied on them in 1942, at the height of Turkey's single party rule. While Muslims paid 5 percent tax, Turkish Jews paid 179 percent and Christian Armenians 232 percent. And that happened when secularism was a somewhat sacred concept whose critique was unthinkable. 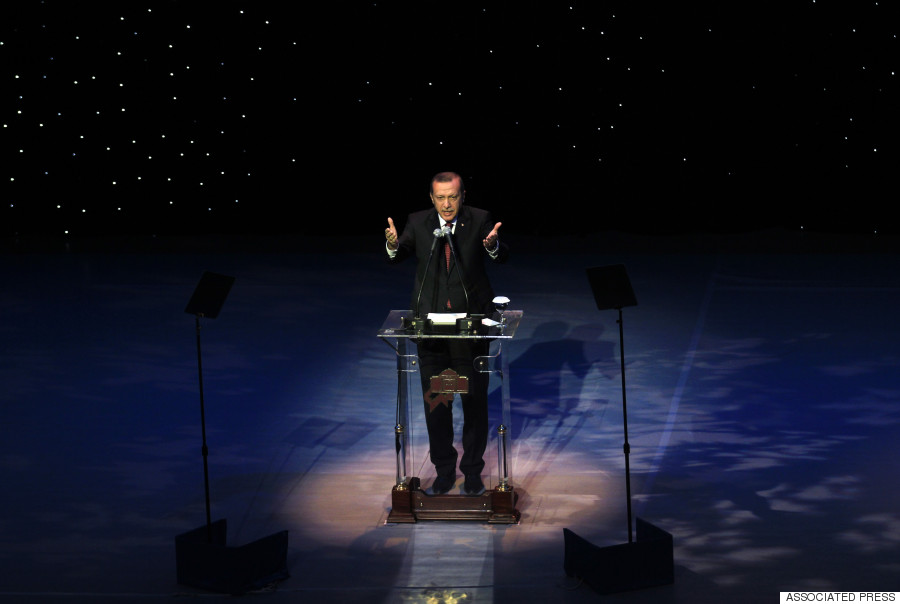 Erdogan delivers a speech in the Cairo Opera House in Egypt on Sept. 13, 2011. (AP Photo/Khalil Hamra)

Sunni Turks also don't have good things to say about Turkish secularism. Talk to a middle-aged headscarved Sunni woman today and she will most probably tell you how the Turkish state had interfered with their right to education and how it had kept them away from the public sphere. Less than a decade ago headscarved girls were not allowed into universities, when this was seen as a violation of secularism.

All these criticisms were set aside after the speaker's speech when people rushed to the defense of secularism as a concept. Secularism means different things for different people; the iteration of the word brings out hopes and disappointments, passionate defenses and stories of trauma. And yet the word itself provides the door that leads into this debate that had been going on for the past 150 years.

"The new constitution needs to be a declaration of a transition from the French type of militant laicism to a more libertarian British type of secularism," Turkish anthropologist Ali Murat Yel wrote in an op-ed last week. "In other words, the Turkish state should provide its citizens with a freedom to believe or not believe whatever they like instead of dictating only one form of religion."

Secularism means different things for different people; the iteration of the word brings out hopes and disappointments, passionate defenses and stories of trauma.

As religion became much more visible in the public sphere over the past few years, dictating one form of religion became increasingly impossible. These days on the streets of Istanbul you come across religious festivities of not just Sunni Muslims but also Turkish Jews and Christian Armenians. From Greek Orthodox celebrations of the Feast of the Epiphany, where Orthodox Christians dive into the cold waters of Istanbul's Golden Horn to retrieve the wooden cross tossed there to commemorate Jesus Christ's baptism to the Hanukkah celebration by Turkish Jews that was held publicly for the first time last year, the public visibility of religion has become less of an issue. In February this year, Turkey's minister for EU Affairs, Volkan Bozkır, announced that Turkey would be removing the "religion" category from its new identity cards, in line with its EU visa liberalization deal.

"In the new constitution which we are preparing, the principle of secularism will be included as one guaranteeing individuals' freedom of religion and faith, and the state's equal distance to all faith groups," Prime Minister Ahmet Davutoğlu said in a speech last week. Turkey has passionately debated what the word secularism means, should and shouldn't mean over the past century and keeping the word in the new constitution will be a reminder of its legacy from late Ottoman modernization to the postmodern politics of our own day.

Nowadays, Turkey is going through a difficult period, and there is a growing sense of public anxiety following attacks by militants from the self-proclaimed Islamic State and the Kurdistan Workers' Party, or PKK. But the current political climate, with its heated debates about big issues like secularism, is not unique in Turkey's history: the country has been here before. In the mid-nineteenth century, Ahmed Cevdet Pasa -- father of the novelist Fatma Aliye, seen today as an Ottoman Jane Austen -- created Mecelle, a civil code applied in the secular courts. Secular schools and laws were implemented in the nineteenth century empire and the last Ottoman caliph Abdulmecid was a painter. While she faced major challenges, from the rise of nationalism and modernity in Europe to the difficulty of fulfilling the needs of numerous religious groups, the empire confidently pressed on with human-centered reforms. Today's debate about secularism is no doubt part of this long and fascinating history of Ottoman modernization. Earlier on WorldPost:

In Turkey, Secularism Is Much More Than a Word
Turkey's Border Crisis