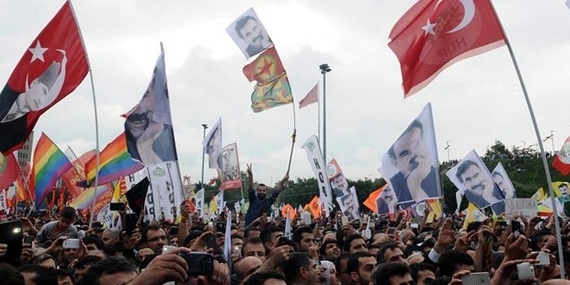 (LGBT banners, portraits of Öcalan and Atatürk, Turkish and PKK flags side by side at the HDP election celebration in Istanbul. Image via t24.com.tr)

Sunday's general election was a turning point for Turkey. For the first time in 13 years, the Justice and Development Party (AKP) no longer controls the majority in the parliament and cannot govern alone. This is a major blow for a party that has dominated Turkish politics since 2002 and its polarising and overbearing founder, President Recep Tayyip Erdoğan. Victory belongs to the People's Democratic Party (HDP) and its young and charismatic co-chair Selahattin Demirtaş, who smashed the 10% election threshold with strong support from conservative Kurds and secular Turks.

There is much to speculate about the new and uncertain era that has just started. But let us first grasp what the present moment really means for a country long believed to be lost to illiberal populism and paranoid authoritarianism:

1. Check on Erdoğan's hubris. Once again, the man who wanted to be the founder of 'new Turkey' turned an election into a referendum about himself and his vision for the country. And for the first time, he lost. Using state resources, Erdoğan campaigned on behalf of his former party, even though his constitutional mandate prohibited him from taking sides in party politics. He railed against the opposition and asked voters to give him 400 MPs (out of a total of 550) who could rewrite the constitution and implement a Putin-style presidency without recourse to a referendum. Instead the AKP received 258 seats, losing 53 deputies and its mandate to govern alone. Erdoğan's personal ambitions have been checked and his dream of a presidential system lies in tatters.

2. Reality check for the AKP. The AKP was the transformative force in Turkish politics for the good part of the 2000s, but it has been backtracking on most of its achievements since its third straight general election victory in 2011. Economic growth has stalled. Foreign policy lies in ruins, symbolised by Turkey's disastrous engagement in Syria and "precious loneliness" in the Middle East. The informal coalition that had enabled the AKP to end the military's guardianship and push through EU-driven liberal reforms has come apart, with Erdoğan doing away with former allies and comrades in his pursuit for power and debilitating paranoia. Along the way, he has undermined Turkey's already weak democratic institutions, stifled civil liberties, polarised society and inadvertently energised a sleepy opposition.

The AKP is still Turkey's largest party and will continue to play a key role in its future. But it is deeply divided and has lost its course. To reverse this trend, the party needs to return to its earlier, more humble, reconciliatory and pragmatic self, which seems unlikely under Erdoğan's tight grip.

3. Defeat of hate speech. The president and the AKP ran the most negative campaign in Turkey's recent history, irresponsibly provoking their supporters' most illiberal and chauvinistic instincts. Desperate to keep the HDP under the threshold by maintaining conservative Kurds' loyalty to the AKP, Erdoğan and the pro-government media painted the HDP and Demirtaş as a bunch of atheists, homosexuals and Armenian lovers, in bed with the Zionist West. But the voters rejected this discourse, with the AKP losing almost the entire Kurdish southeast to the HDP.

It wasn't just Erdoğan, whose hate-filled rhetoric fell flat on the polling day. Days before the election, Yılmaz Özdil, a columnist who is popular among secular Turkish nationalists, described those leaning towards the HDP as "the ammunition in the [terrorists'] Kalashnikov". The fact that the HDP received unprecedented support from secular Turkish strongholds in Istanbul and Izmir shows that a growing number of Turks no longer subscribe to the stereotyping of Kurds as terrorists and separatists.

4. Victory of hope. Unlike its opponents, the HDP maintained a remarkably positive campaign, using inclusive language, humour and a vision of hope and peace. This is despite the fact that the party faced a verbal and physical onslaught: pro-government thugs attacked and killed their supporters and bombs went off at their offices and rallies. Even after twin explosions killed two and injured over a hundred people at their final rally in Diyarbakır, Demirtaş appealed for calm and spoke of peace:

"We will stand shoulder to shoulder and overcome this attack", he said. "No doubt they will try to stop our march. They have tried to strike a blow to our heart everywhere. Yet what we need is peace. We will bring peace to this country. You will provide that peace."

5. Restored faith in democracy. With an 85% turnout rate, the election has demonstrated that Turkey's citizens have a stake in their country's governance. This was not a fair election: the AKP abused the state's vast resources, while the HDP had to overcome financial limitations, organised hate campaigns and an undemocratic election threshold. Nevertheless, the fact that such a turning point has arrived through the ballot box means the integrity of Turkey's electoral institutions is intact, despite its many other democratic shortcomings.

Fears of massive vote rigging turned out to be overblown - in part a result of the country's toxic atmosphere of distrust and partisan polarisation. But it was the tens of thousands of ordinary citizens who were on high alert and mobilised to protect the vote that have helped restore the people's eroding faith in its democratic institutions.

6. Triumph for Gezi Erdoğan framed Gezi Park demonstrations of 2013 as a foreign-backed coup attempt against his government. Many of his supporters believe him. Yet the rhetoric of conspiracies and traitors, shadowy lobbies and agents did not win him a single vote on Sunday. It was the HDP (and to some extent the Republican People's Party, CHP) that acknowledged Gezi's core demand for pluralistic grassroots democracy and made it a pillar of its progressive platform.

The Kurdish movement had an ambivalent stance towards Gezi; on one hand, supporting the protests and on the other expressing concern that they could be hijacked by ultra-nationalists opposed to the ceasefire and ongoing talks between the AKP and the PKK.

But many Kurds and HDP members were at the forefront of the protests, among other socialists, nationalist Turks, Alevis, anti-capitalist Muslims, environmentalists and LGBT activists. And the brutal crackdown that most Turks experienced for the first time in the west of the country belatedly awoke them to the terrible oppression that the Kurds had fought against for decades in the east. The seeds of a new cooperation that culminated in the HDP's strong performance on Sunday were sown during Gezi.

Arguably the most important victory for Gezi is the pluralistic composition of the new parliament, which includes three Armenians, two Yazidis, one Assyrian and one Roma MP, as well as many Alevis and Kurds. It has more women than any previous assembly (still low at 17%, but up from 9%). Thirty-one of the HDP's 80 deputies are women. Nineteen deputies wear the headscarf, including the sister of Merve Kavakçı, who was thrown out of the parliament for covering her head in 1999. Leyla Zana, who was expelled in 1994 for addressing the assembly in Kurdish and then imprisoned, is also back. Overall an encouraging sign that Turkey is shedding its past taboos and starting to show its true colours.

7. Transformative moment for the Kurdish movement The HDP's victory is a watershed moment for the Kurdish movement, which is growing out of its ethno-nationalist roots and geographic confines to become the post-nationalist, pluralistic and democratic response to the AKP's religious nationalist populism. At the centre of this transformation is Abdullah Öcalan, the imprisoned leader of the Kurdish guerrilla organisation PKK. Once a Stalinist, he has been preaching a radical democratic worldview to his movement from his island prison for over a decade, reviving the 'libertarian municipalism' and 'social ecology' theories of American socialist libertarian Murray Bookchin, little known beyond anarchist circles in the US.

Yet it also signals a generational shift. As revered as he is, Öcalan is something of a myth for most young Kurds, who grew up in the relative stability of the 2000s, never saw the big man and do not aspire for the life of a guerrilla in the mountains. The hero they associate with, admire and aspire to emulate is Demirtaş, a human rights lawyer who never fought in the guerrilla, whose weapon is his disarming wit and whose battlefield is the parliament.

8. Winds of change blow across the Mediterranean. Turkey is in a different place when compared to crisis-ridden countries of southern Europe, yet it has been carried by the same popular anti-establishment wind that has given rise to Podemos in Spain and Syriza in Greece. (Indeed, both movements have lent their support to the HDP and congratulated its victory). Led by charismatic young leaders, organised in public spaces and online, and advocating socially progressive agendas, these are the movements that will reshape and champion the global democratic left against the wars and plunders of neoliberalism in the coming years.

9. A breath of fresh air in the Middle East. With its radical democratic agenda, the HDP also represents a breath of fresh air in a region being crippled by sectarian conflict and cultural extermination. Indeed, the winds that carried the HDP into the parliament did not only blow from the Mediterranean, but also from Syria. The Kurds' victory earlier this year against ISIS in Kobane, a strategic stronghold for the Kurdish movement and its secular, pluralistic 'Rojava revolution', has greatly boosted their confidence and international standing at the expense of the AKP, which has become bedfellows with the jihadis in Syria and their Saudi and Qatari patrons.

This and other shadowy dealings of the AKP will come under greater scrutiny in post-election Turkey. The country is now cruising in uncharted waters, and uncertainty will define its domestic and foreign politics in the near future. At least one thing is certain: After years of ruling an imaginary Ottoman empire, the sultan has lost his crown. Democracy is alive in Turkey.