As Turkey slouches toward dictatorship, purging enemies and former allies, Recep Tayip Erdogan has a cheering section, in the form of the AKP, the ruling party in Turkey. But as I learned in a discussion with the Alliance for Shared Values, the AKP is next on the Erdogan's list to be exterminated. And the first step came with the forced resignation of Turkish Prime Minister Ahmet Davutoglu.

When I visited Turkey during last year's summer election, I met a number of enthusiastic AKP members, eager to support their candidates and principles. Flags in orange, blue and white, the party colors, could be found hanging everywhere. A couple that enthusiastically talked up the party to me even dubbed me "English John," because they found my attempts to speak Turkish more fitting of a European than an American for some reason.

It's sad that soon they, and anyone else connected with the AKP, will join those who have been arrested, and even killed, in this dying Middle East democracy.

How is that possible, you think, if you've been following Turkish politics? Doesn't Erdogan need a ruling party to stay in power? And aren't they his friends? Don't they love him?

Like a story from George R. R. Martin, modern Turkish politics is a sad tale of backstabbing and selling out one's friends, as any Game of Thrones binge-watcher can attest to. It's not how much one loves another, but whether their mere existence serves as a threat, and needs to be eliminated. 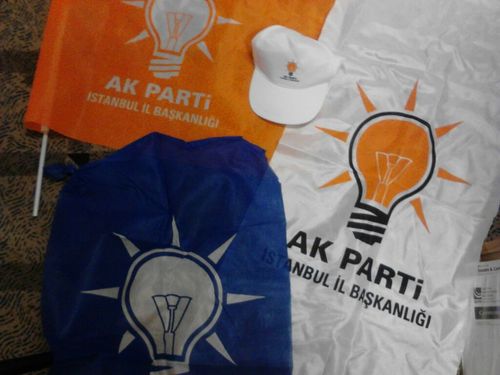 First of all, we should look at what happened to his former friends, the Gulenists. They loyally supported Erdogan because they thought they shared some common values, when in reality, the only thing the Prime Minister at the time cared for was himself.

When Gulen allies uncovered his corruption, Erdogan's vengeance was swift. Businesses were shut down and people are constantly being arrested, apart from the uncaring eyes of the Americans and Europeans, eager to have someone they can think of as a Middle Eastern ally.

"When Erdogan purged the generals, and secularists, we did not stand up to him as we should," the Alliance for Shared Values, linked to Gulen, told me. "We should have seen the writing on the wall."

Gulenists are hardly the only victims. AKP coalition partner the MHP was downsized in the Fall 2015 election in favor of the ruling party. Remember when Erdogan was going to create peace with the Kurds? That worked, until their political party won enough votes to block Erdogan from redoing the constitution to his liking, and the war on the Kurds began.

Since he was elected more than a decade ago, Erdogan has dominated Turkey under a parliamentary system. The AKP gives him blind loyalty. So why would he move against them?

Why move the country from a parliamentary system to a presidential system, one should ask. In both cases, we can find the capacity for dictatorship. But in the latter, the political party can be easily dispensed with.

There's only one organization that can stand up to Erdogan as he seeks to dominate Turkey the way Putin controls Russia. There's only one group that can block his ambitions for a hereditary dynasty, and can make all kinds of deals with anyone. It's the AKP.

And it won't take long after he gets his presidential system that the party is in a rush to give him the reigns to a strong presidency that's effective enough to take out the group that put him in power, and the only one capable of removing him, in a parliamentary system.

Now Prime Minister Davutoglu has been ousted, after having been stripped of power. And Turks told me that they though he was too much of an Erdogan loyalist anyway. How much more of a patsy does the Turkish President want?

"We do not have any side to take or otherwise there is no sides," wrote Yusuf Serce, from Milat Gazetesi, in a reply to my email question about what's happening in Turkey. "Erdogan just does routine presidency lapping. Everything is in order and %100 lawful. My personal opinion still stands same 'we need full Presidential System' for our democracy.'"

Yusuf could be in for a real surprise soon.

The AKP members better watch their step. Their cheers as they hand more power to Erdogan and create an autocratic constitution will be met with cries of dismay, as the "ceremonial" Turkish President uses the new reins of power to destroy the one group that can block his ambitions.

The AKP celebrated stripping power of immunity from legislators, so they can go after the Turkish-Kurdish HDP parliamentarians. They didn't even realize they were stripping themselves of power. It will be easier for Erdogan to purge the AKP now. It echoes the story of the German who does not stand up to Hitler when Jews, gypsies and others are dragged away. Then the German sadly laments that no one will stand up for him when the Nazis drag him away. How do we know it can happen? It's already happened before. It will be the same sad story, with a different set of unsuspecting victims.