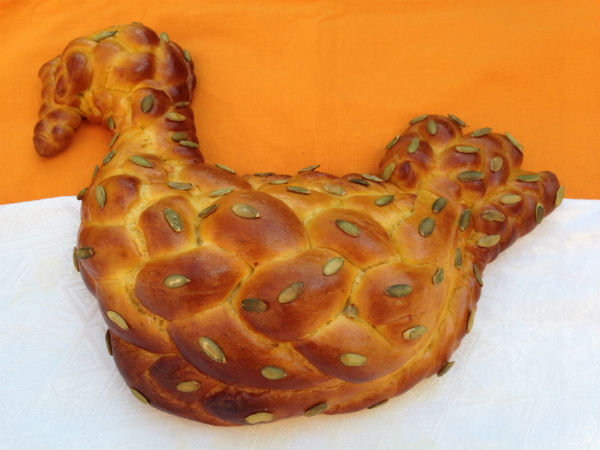 This fall saw a bounty of tweets and posts from all cooks and foodies, busy creating new dishes to celebrate this year's rare convergence of Hanukkah and Thanksgiving. Are you amongst those who will mash up the culinary traditions of the two holidays, or are you with the ardent traditionalists who are unequivocal about wanting the traditional Thanksgiving and Hanukkah meals equal but separate?

As an immigrant who readily adopted Thanksgiving and other American food traditions thirty years ago, and who usually rejoices for the opportunity to mix traditions, I fall somewhere in the middle. I am ambivalent about giving up our traditional Thanksgiving feast. After all, it comes around only once a year, while there will be seven other nights for latke. On the other hand, Thanksgiv-ukkah is a once-in-a-lifetime occurrence. Who knows what food traditions our descendants will follow when Thanksgiv-ukkah comes again in 77,000 years from now? So, while mixin' traditions in honor of Thanksgiv-ukkah would be in order for me, my mash-up recipe of choice would be subtle and fun: a turkey-shaped pumpkin challah, or, as I like to call it, Turkallah.

I have done the mixing traditions with bread before. A few years ago, when I was developing my Voilà! challah line of all-natural Egg Bread Mixes, I created Sweet Cranberry challah. This year, I took it up a notch. I not only mixed flavors, I also created a visual mix -- a braided challah in the shape of a turkey. My pairing of pumpkin and challah is a twist on the Sephardic Jewish, traditional, turban-shaped pumpkin challah, pan de calabaza, baked for Rosh Hashanah. Many traditional bakers use pumpkin puree or potato water in their challah dough. It produces soft, fluffy bread. My pumpkin bread, unlike pan de calabaza, uses sweet-spiced pumpkin butter. A spur-of-the-moment inspiration, this DIY braiding project was so much fun that the next morning I found myself smiling every time I thought about it. I could not believe how easily it all came together.

The infusion of these holidays inspired, not only the making up of new recipes, it also inspired us to be creative with words. I debated the name for my turkey-shaped challah -- Turkallah or Hallarkey, to rhyme with Menurkey, the turkey-shaped Menorah. My choice for combining Thanksgiving and Hanukkah would be Thanukkah, not Thanksgiv-ukkah. It is shorter, and elegantly simple. However we call or celebrate the day they converge, the two holidays have in common more than just mashed up recipes and words. In both, we find the theme of freedom -- the pioneers who escaped the darkness of religious persecution, and the Macabees who fought to regain the light of religious freedom. I wish for all of us to count our blessings, give thanks and have a delicious feast -- or eight.

I baked this turkey-shaped challah from two Voilà! Challah Traditional mixes. To prepare the pumpkin challah dough from scratch, double this recipe.

Mix all the ingredients in a small saucepan, bring to a gentle boil and simmer on low for 20 minutes, till thicken. Make sure to mix butter intermitently while cooking to avoid scorching.

2. Pour the baking mix into a bowl of a stand mixer. With a spoon, create a well in the middle, pour the yeast into the well and pour the water on top. Let stand for 5 minutes to activate.

3. Add eggs, oil and pumpkin butter. Mix with the hook attachment for 10 minutes on low. Scrape sides of bowl and hook as necessary.

4. Scrape dough from the bowl and shape dough into a smooth ball and place in an oiled bowl smooth side down to coat then turn. Cover and let rest for 10 minutes. Meanwhile, oil your board, or lightly dust it with flour, and line a large baking sheet with parchment paper.

5. Body: Divide dough into two equal balls (A & B). Set ball B aside. Divide ball A into 6 equal parts and braid into challah. Place each of your palms on each end of the braided challah and roll back and forth in an outward motion, with a bit of pressure, to taper the ends. Place on a parchment-lined baking sheet. Arrange in a U shape with edges pointing upward.

6. Belly and Back: Divide ball B into three balls (B1, B2, B3). Set balls B2 and B3 aside. Divide B1 into three balls, roll each ball into a strand, approximately 12 inches long, and braid into a three-strand, even-width rope. Cut a two-third section and place it below and along the bottom of the six-strand braid body, lifting the body's outline (belly) to overlap on top of this section's outline. Place the leftover one-third section above and along the top outline (back) of the body, tucking its outline underneath the body's outline. 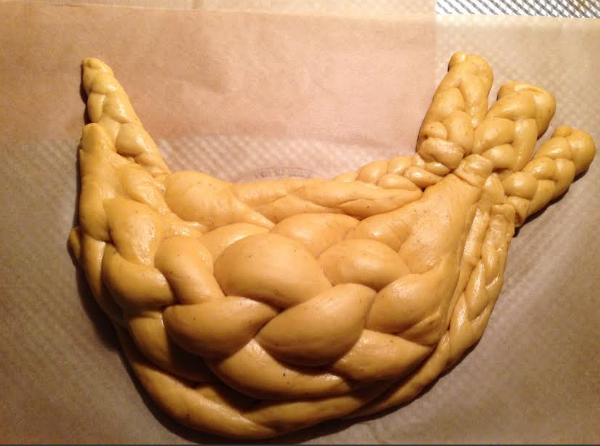 7. Tail: Divide ball B2 into 2 equal parts (C & D). Divide part C into three balls, roll into strands, about 10 inches long, braid an even rope and cut into three even sections. Attach in a fan-like shape at the end of the tail on the right of the bird's body.

8. Divide ball D into three equal parts (D1, D2 & D3). From each part, create a three-strand braid. Use one section to run from the right side of the bottom (belly) to the tail (to thicken tail part), second section along top right (back) to the tail base.

10. With a pastry brush, paint the egg wash all over the bread, including in crevices. Place pumpkin seeds on the bumps and let rise in a warm, draft-free area for 45 minutes. 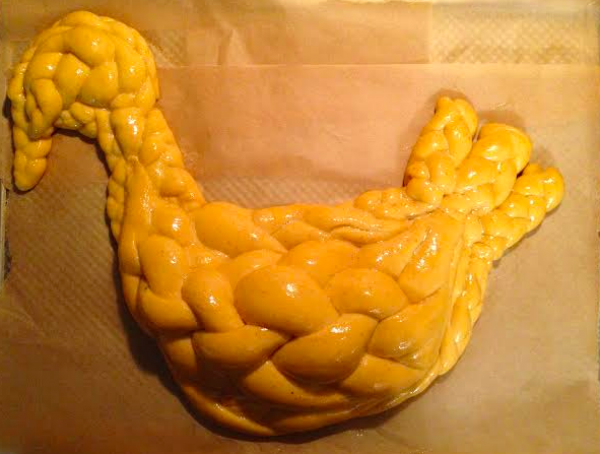 11. Preheat oven to 350°F. Bake on the middle rack for 12 minutes. Turn the baking sheet around and bake for another 15 minutes. Bread is done if it sounds hollow when tapped on bottom with fingers. If not done, bake for another 5 minutes. 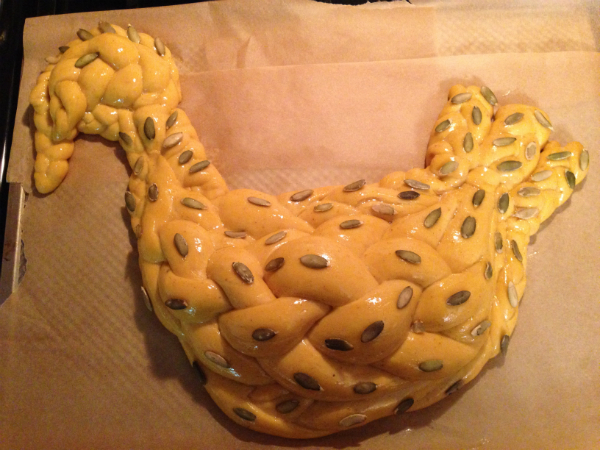 12. Let cool on a rack before serving.

More:
hannukahTurkeyThanksgivingchallahTaste
Newsletter Sign Up
An essential daily guide to achieving the good life
Subscribe to our lifestyle email.
Successfully Subscribed!
Realness delivered to your inbox