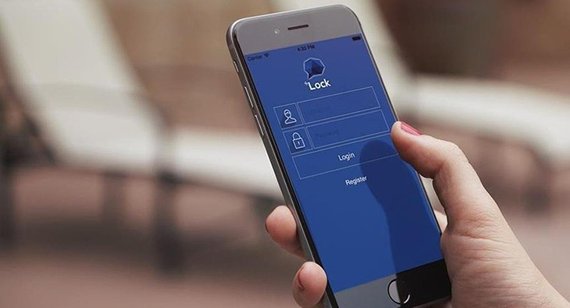 Just imagine the police storm your house, put you in a police van and drive away. For days, you remain under custody. You would be lucky if you're fed, allowed to sleep or at least not tortured. In about 10 days, you are brought before a judge who asks you about an iPhone app called Telegram that you downloaded 2 years ago. Before even you have a chance to ask how come the judge could even know what you installed on your iPhone 2 years ago, he seals your fate. "Because ISIS militants use Telegram to communicate among themselves, you are most likely part of that terrorist group," the court decision says to justify the arrest. You are probably sitting in a jail for several months now, with no idea when you may be released.

This is a scenario based on actual events in Turkey. Tens of thousands of people have been arrested over downloading a smartphone app called ByLock and the Turkish police are now saying that there is no basis for that, contradicting court decisions that already landed thousands in jail across Turkey.

On Oct. 10, Istanbul's 14th High Criminal Court sent a request to Istanbul's Chief Public Prosecutor's Office, asking that they present "information, documents and data" about how defendants used ByLock to secretly communicate among themselves. 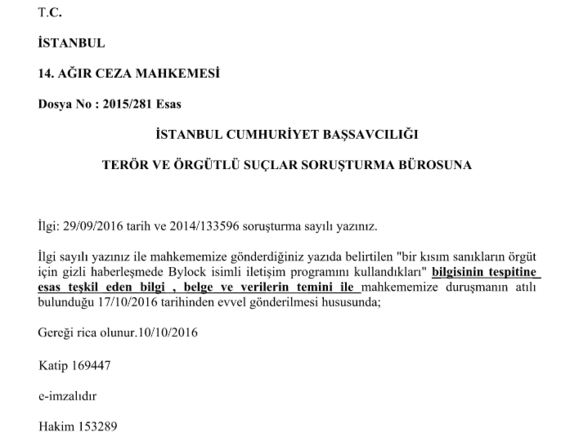 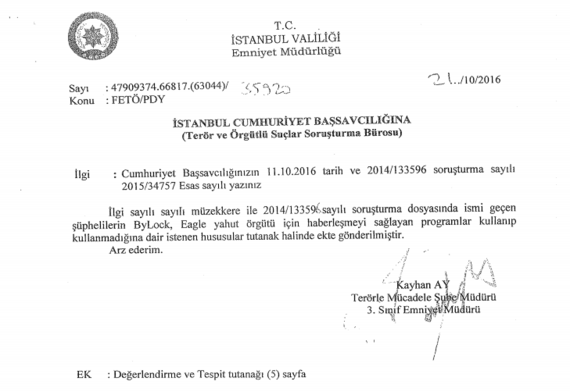 The document mostly consists of news reports published by government mouthpiece newspapers about ByLock and how Gulenists used it for the communication. The police say the findings were sent from the spy agency MIT and that it includes at least 53,000 people who used the app.

On the 5th page of the document is the list of suspects who allegedly downloaded the ByLock app. On the very bottom of the list is a note by the police warning that these findings cannot be legally used as an evidence in a court of law. The police report says the data about suspects' phone records was retrieved through the intelligence work and as part of the Law 2559 on Police Duty and Authority (PVSK), which prohibits the findings to be used as part of a judicial or an administrative investigation.

Turkish laws do not allow courts to use evidence gathered through an intelligence work. According to the Turkish Code of Criminal Procedure Art. 135, only high criminal courts can decide through a unanimous vote to intercept and wiretap communication of suspects, who are already under investigation and there is a "strong suspicion based on tangible evidence." Communications intercepted after this relevant court decision could only be used as evidence in courts.

In the ByLock case, in which the intelligence agency only identifies who uses the app, Turkish laws are quite restrictive. The 6th article of the same law stipulates that only a judge during an investigation and a court during a prosecution can decide whether or not to identify the communication tools used by suspects. Any findings bypassing this proceeding cannot be used as evidence in a court of law.

Even Article 6 of the Law 2937 on MIT prohibits these types of findings from being used for other purposes than intelligence.

Prosecutors claim that ByLock is an app used by members of the Gulen movement to orchestrate the coup attempt on July 15. Prosecutors even launched a probe into a news report that quoted ByLock's owner claiming that the app is not available at AppStore since September 2014 and at Google Play since January 2016, seven months before the failed coup attempt.

Let alone ByLock being available to the public through AppStore and Google Play, Turkish courts have been imprisoning people who are not even remotely involved with the coup. The list includes journalists, members of the judiciary, academics, teachers, the police, doctors and even soccer referees. They are all accused of downloading the ByLock app, hence being a member of a terrorist organization that masterminded the mid-July failed coup attempt.

Even if the app was used as a communication means between a bunch of criminals, it does not make the app itself a tool of the crime and others who installed it as criminals.

The police report said having the ByLock app -- if not presented with a separate evidence -- cannot be directly used in judicial and administrative investigations.

But it seems Turkish courts are not really interested in what the police say or what Turkish laws require. Since the police submitted its report, with its warning, courts continue arresting dozens of suspects every single day on charges of having ByLock app.