A full-page ad supporting anti-government protesters in Turkey appeared in the front section of the New York Times on Friday.

Earlier this week, a small group of supporters launched a campaign on Indiegogo to raise money for a full-page ad in a major newspaper like the Times. The campaign reached its funding goal within its first day. By the day the ad ran in the Times, the campaign raised more than $100,000.

The published ad included an image of a tear gas can and asked in big block letters, "WHAT'S HAPPENING IN TURKEY?" The text below read:

People of Turkey have spoken: We will not be oppressed!

Millions are outraged by the violent reaction of their government to a peaceful protest aimed at saving Istanbul’s Gezi Park.

Outraged, yet not surprised.

Over the course of Prime Minister Erdoğan’s ten-year term, we have witnessed a steady erosion of our civil rights and freedoms. Arrests of numerous journalists, artists, and elected officials and restrictions on freedom of speech, minorities’ and women’s rights all demonstrate that the ruling party is not serious about democracy.

Time and again, the Prime Minister has mocked and trivialized his nation’s concerns while Turkey’s own media have remained shamefully silent.

The people protesting bravely throughout Turkey are ordinary citizens. We span several generations and represent a spectrum of ethnic, religious, socioeconomic, ideological, sexual, and gender identities. We stand united because of our concern for Turkey’s future. Our future.

We demand an end to police brutality.
We demand a free media.
We demand open democratic dialogue between citizens and those elected to public service, not the dictates of special interests.
We demand an investigation of the government’s recent abuse of power, which has led to the loss of innocent lives. 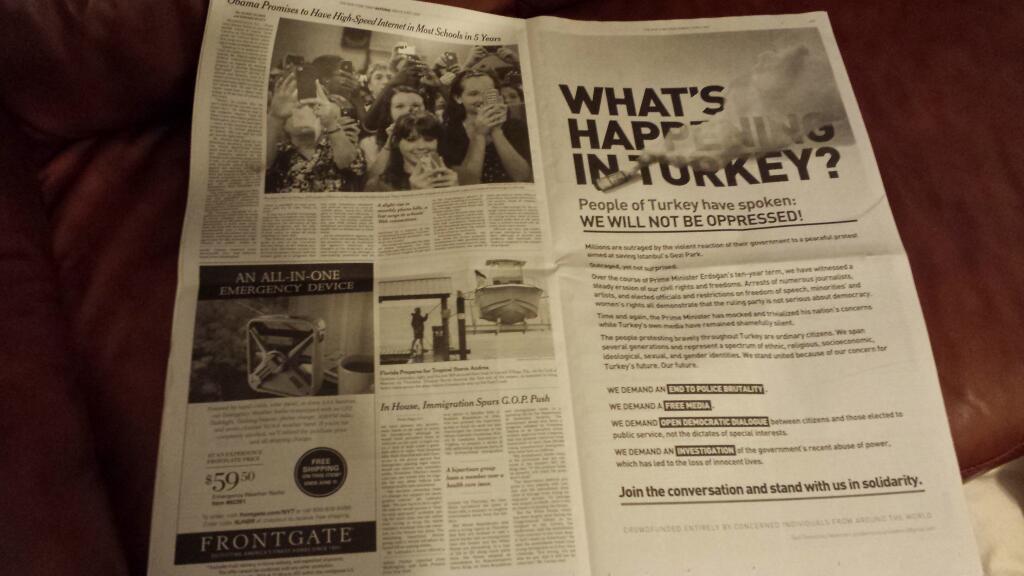