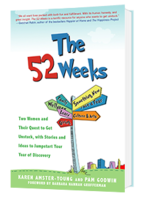 With permission from the authors of "The 52 Weeks: Two Women and Their Quest to Get Unstuck" I'm sharing the Foreword to the book, which I wrote, as a way to describe how I felt after turning 50.

Here's an experiment: imagine you're under a spell -- or really, a curse. You aren't asleep or even hurt. You haven't been imprisoned in a tower or turned into a toad. No, under this spell you are not only alive, but able to live your life exactly the same way you did yesterday.

You're never going to change anything about your life ever again.

You can't. Because you're cursed.

It's the Inertia Curse.

Scary, no? I love my little routines (don't we all?) and my comfort zone is very comfortable, but the idea of doing everything just as I've always done it, without anything new ever? Terrifying. Even thinking about it, I feel claustrophobic. Like I'm being buried alive.

And yet, there's something kind of familiar about that feeling. As if maybe I've been there before...

When I was in my twenties, change was my constant. I was young and it seemed like everything was new. New apartments, new jobs, new boyfriends. I was always looking ahead, planning for the future, always confident and excited about what was coming next.

In my thirties, I settled into a nice humming groove, but it was a good kind of settling -- like finding my place. I was still planning, still making choices. I got married. I had kids. Still good!

But sometime after that... It seemed like all the choices had already been made. Like I'd quit planning and had switched to autopilot. I was zipping along and doing and doing and doing, but I wasn't looking ahead anymore or thinking about who I wanted to be. Of course, I had plenty of other things to think about, what with a job and a wonderful husband and two fast-growing daughters.

And then, suddenly, I was 50. 50? How had that happened? Whenever I caught a glimpse in a mirror, I didn't even recognize myself. The woman behind the glass didn't look excited and confident. She looked scared and insecure. She didn't know who she was or how she fit into the world anymore. I'd been flying through my life so fast that I'd quit really living it. "Oh, well," I told myself. "It's too late to change." Whatever my life was, I was going to be stuck with it from there on out.

But I didn't want to be stuck with it. Sure, I kept trudging through my routine, but inside I was feeling more and more frustrated and suffocated, and just not sure what to do. I was stuck.
Those feelings built up for months until one day it hit me: my age wasn't trapping me. Neither was my family, or my work. I was trapping myself! I was squashing my own confidence and fostering my own fears and I was hiding inside my narrow little comfort zone.

I was the reason that I was stuck!

That realization opened a floodgate. I stopped fretting about missing out on life and went back to living it. I took charge again: of my health and my happiness and my future. I started looking forward to what was next.

I now say that turning 50 saved my life -- because it pushed me out of my complacency and forced me to pay attention again. But the transition would have been a little easier and a lot more fun if I had gotten help from Karen Amster-Young and Pam Godwin.

Karen and Pam are smart and lovely women. They are both happily married with children and lead very busy lives. If you met them on the street, you'd think they were "doers" -- and you'd be right. But they got stuck anyway, just like I did. Just like so many of us.

Turns out they were on autopilot, too. They liked their lives in many ways, but as they passed 40 and kept zipping through the same routines, their comfort zones started to feel more like cages.
So one night, over drinks, they came up with a brilliant and deceptively simple idea to get back in touch with their lives. They dared themselves to do one new thing every week for a year--and to write a blog about it.

Over the next 52 weeks, they did big things and little things, things they'd always been scared of and things they'd meant to do, but had never quite made time for. They didn't get to a few things and even did a few things they probably wish they hadn't done. At the end of it all, they're still smart and still married (and still friends!) but they're not quite the same women they were at the beginning. They're unstuck.

During that year of new things, the blog gained an enthusiastic following of people who were feeling trapped in their own lives -- and ready to do something about it. So Pam and Karen kept going. Now they've pulled together everything they learned: their struggles and triumphs and insights, as well as some expert advice. The result is a terrific new book -- The 52 Weeks -- a truly inspiring guide to reclaiming your life through the simple power of action.

To me, one of the most treacherous things about the inertia curse is how easily we can fall under its spell even when we are basically content. Sometimes contentment is what keeps us stuck! After all, most of us don't want to turn our worlds upside down. And most of us don't need to. But if you're ready to make a few changes, Karen and Pam are here to help you figure out how.

Life is change, and learning to enjoy change -- perhaps even to embrace it -- is the first step in learning to love your life.

Questions? I want to hear from you! For more tips on living your best life after 50 (or 60, or 70...) check out my video series - The Best of Everything After 50 - on the AARP YouTube Channel. Keep me posted on how you're doing by subscribing to me on Facebook and "tweeting" me on Twitter at @BGrufferman.