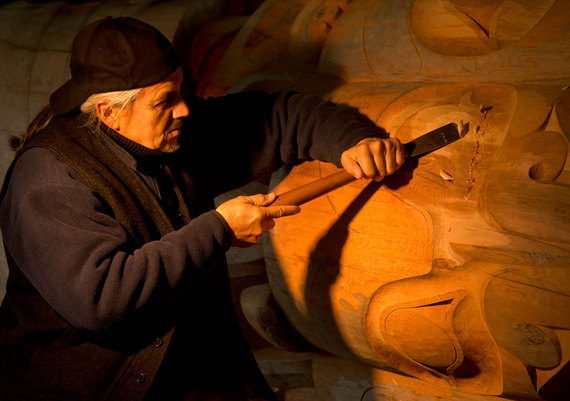 All cultures create monuments to represent and commemorate an aspect of their history and ancestry. In the Pacific Northwest First Nations people carve these stories in tall and ancient Western red cedar. Since the end of September, James Hart, his family and several colleagues have been in the final stages of carving an 800-year-old tree, transforming it into their story of Reconciliation. The pole is being completed behind the Museum of Anthropology on the UBC campus in Vancouver British Columbia. The creation of this 70-foot tall story pole actually started far to the north in Haida Gwaii more than two years ago.

I have been very fortunate to watch this process from the beginning. Working for Lindblad Expeditions-National Geographic as a naturalist and photo instructor, I travel with guests for two weeks, once in the spring and again in the fall, aboard the National Geographic Sea Lion and Sea Bird through the Inside Passage from Washington State, through British Columbia to Southeast Alaska. In the spring, we travel north, following the migrating animals and birds returning to their feeding and nesting grounds. In the fall, we travel south, following the return of the salmon, an ever changing bounty. These fish return to their natal rivers, flowing through Alaska, British Columbia, Washington, and Oregon, providing food for bears, birds, small forest creatures, and for all humans who celebrate in the harvest of these fish. In the spirit of this place, our small vessels journey through the waters of the Inside Passage following canoe paths of generations of Native and First Nations people who have called this land home and celebrated the abundance of land and sea. Indigenous peoples are resilient, living their culture in spite of generations of trials and tribulations. They constantly consider how they are treating the Earth and how to preserve it for the next seven generations who will follow in their footsteps.

A highlight of our journey is a visit to Haida Gwaii, an archipelago, located approximately 62 miles off the coast of Northern British Columbia. Crossing Hecate Strait and waking up in Haida Gwaii is heartily welcomed by staff, crew, and guests. I often rise early, walk out on deck and watch the approach to the dock in Queen Charlotte City, excited to be in another home along the Northwest coast. I am looking forward to visiting old friends and seeing where the months have taken us all! Once our guests are on shore, we board two school busses, the only available transportation large enough for all of us, and make our way north along the length of Graham Island to the community of Old Massett.

Old Massett is one of several communities in Haida Gwaii where the resurgence of Haida culture and art can be found. Over the last three years our travels here have included extraordinary visits to the home and workplaces of Haida Artists. In Old Massett, in the late 1960s a new totem pole was raised, the first one in nearly 100 years. Today, 50 years later, as we walk around the community we see many totem poles, carved canoes, painted house fronts and signs advertising argillite carving.

I think back on my first visit to James and Rosemary Hart's home three years ago. I often reflect on those moments being welcomed into the home of a renowned living Haida artist with his family all around him. His home was his studio, his studio was his home. It was a visual feast: tools, future plans for projects, and so many implements associated with family life covered in form line design. When I really listened, I heard James speak about Haida Gwaii, a land he is firmly a part of. I could not only see the sharp and precise motions he made in carving, but I became aware that it was exactly how he spoke, carefully choosing words, shaped to make the same impact as a crooked knife or elbow adz makes in red cedar.

In these last weeks I have been fortunate enough to watch as James and members of his family and community continue transforming this 70-foot Western red cedar log into the Reconciliation Pole that tells the painful story of the residential schools of Canada.

From 1876 until 1996, when the last federally-operated residential school was closed, the Canadian government removed First Nations children from their homes and communities to eradicate First Nations language and culture. As a result of the effect on First Nations people in Canada, the Truth and Reconciliation commission was officially established on June 2, 2008 and completed in December of 2015. The James Hart Reconciliation Pole was inspired "To keep the memory of residential school history alive. Through understanding, through truth, through respect, forward movement can happen."

Northwest coast art is constantly evolving. The Reconciliation Pole tells a story in wood but James has taken that idea a step further by placing a residential school near the center of the pole "to look like it was dropped onto the heads of the people." The carvings below the school represent the world of the Haida people before the children were removed from their families and villages. A mother bear and her cubs, a shaman in ritual, salmon, and the central figure of Raven, the trickster. Raven not only cajoled the first humans out of a clam shell in his trickster voice but also brought the sun, moon and stars to the world of Haida Gwaii along with many other things the Haida people enjoy today. Above the school are the children with numbers carved into their torsos, as was the custom during the time of the residential schools, where children were only known by numbers. 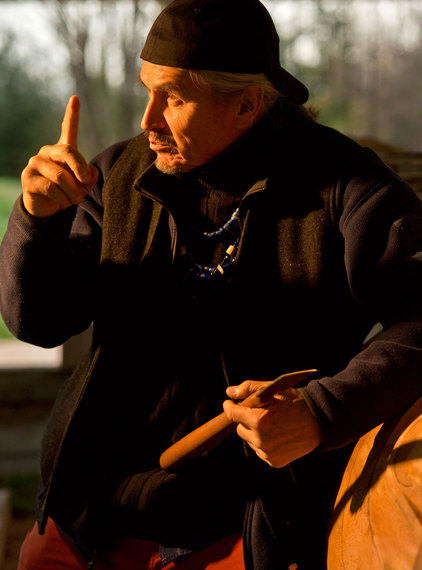 James is working with different indigenous carvers from North America carving the faces of these children. Fifty-seven-thousand-two-hundred solid copper nails are being pounded into various parts of the totem pole represent children who died while attending residential schools across Canada. Above the carved children, the spirit figures of a killer whale, bear, eagle and thunderbird representing water, land, air, and the supernatural moving the story towards the future with hope. Above these figures there is a carved mother, father, and children showing "the family unit getting stronger today." Following upward another symbol of reconciliation: water waves and two boats. One is a non-native long boat, the other, a traditional First Nations Canoe representing reconciliation between indigenous and non-indigenous peoples moving forward together. At the top of the pole an eagle is poised about to take flight. This part of the carving was done by James and his late son Carl, an expression of keeping those we have lost close to us, always near in our hearts. As James would say, "that motion of flight taking us towards our future."

When this pole was shipped in late September from Haida Gwaii to Vancouver it was scheduled to be raised on October 15, 2016. That date has been changed to accommodate ongoing meetings with the Musqueam band council, whose unceded lands include the UBC campus. All parties involved are now completing decisions on the exact location for the raising of the pole and that date has been delayed until March of 2017. An honoring celebration was held on October 15, 2016 in support of the Reconciliation Pole, hosted by James Hart and his family. Many supporting Northwest Coast people and community members across borders were in attendance. Speeches, blessings, and a fine meal were shared by all!

The delay of the raising of this pole has allowed many people within the Pacific Northwest to be involved, to share, to witness and to help in completing the Reconciliation Pole.

I will continue to write segments throughout the winter to inform, not only all our guests who have watched the carving of this pole, but our communities both in Canada and the United States about its progress. I look forward to sharing more as this project moves towards the raising of the Reconciliation Pole this coming spring.