Everyone has a "dream job" lying dormant in their hearts. Unfortunately, it's usually plagued by one negative thought: that it can't become a reality. But many people have turned their dreams into daily realities. How did they get there? What inspires them? Surely they took all the right steps at the exact right time, without suffering any detours. I spoke to a few very successful people working their own "dream jobs" hoping to glean some insight... and inspiration. 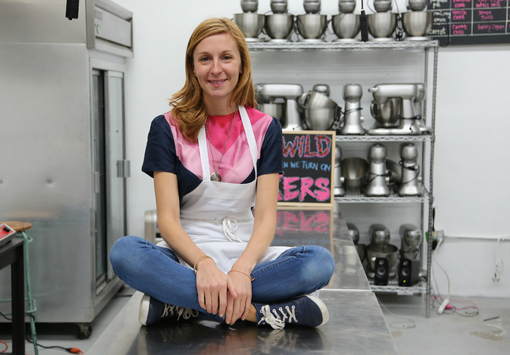 Ask anybody what their definition of a "dream job" might look like and "head pastry chef" would be high up on the list. I mean... being surrounded by chocolate, caramel, and cookie dough all day long? Visions of Willy Wonka's factory and the board game, Candy Land, come true!

Christina Tosi, an energetic pastry chef and cookbook author with an infectious smile, is one of those people. Having started off training as an electrical engineer, she took a few other detours on her path to being named the 2012 James Beard Rising Star Chef Award recipient (including a stint in Florence as a translator!) before finally enrolling in the French Culinary Institute's pastry program in NYC.

Her first job at David Chang's, Momofuku, was writing the food safety menu. It might not have been her dream job - but it was a solid foot in the door. Her perseverance and hard work soon paid off. After proving her inherent expertise on the subject, Christina was put in charge of creating a dessert menu for the restaurant and in November 2008 Milk Bar was born. Christina's now on her way to becoming a household name; she's joined TV's MasterChef and MasterChef Junior as the cooking show's newest judge and is currently filming the upcoming season.

Anyone who's visited Milk Bar knows that it strikes the right cords at exactly the right places a pastry store should; it feels comfortable and serves mouthwatering pastries. In fact, it's a charming place that serves what classic, homegrown deserts might dream of becoming when they grow up. What makes it so special? Christina told me that, "The spirit of Milk Bar is not in the sugar, or butter or flour we use, it's in the creative spirit and the skill we employ to make everything that comes out of our ovens deeply darn good delicious!"

The home-style, all-American deserts that come out of Christina's kitchen are elevated takes on familiar comforts -- I dare anyone to take a sip of Cereal Milk and to not be mentally whisked back to childhood Saturday mornings of sugary cereal eating, pajama wearing, cartoon watching marathons. But despite this talent of tapping into everyone's good memories Christina is very humble and never takes sole credit. "Milk Bar is an unyielding, collaborative environment. Everyone is asked, encouraged, and required to participate. Inspiration has to be pure. Humility is key."

It's this collaborative environment that inspires her to wake up each day, thrilled to get back in the kitchen behind a mountain of ingredients, a mixing bowl and a scalding-hot oven. "I could never do it alone," she says. "Our team comes from all walks of life. We love individuality and diversity. Everyone has a love for food, a passion for hard work, a heart full of integrity. We're up for anything, and never more than 5 seconds away from cracking a joke. We love food, we love to create. We have a family in one another; we challenge and push each other daily to be better than the day before. I am who I am and Milk Bar is what it is because of our undying sense of team and the individual players that make it happen each and every day."

Incorporating "giving back" into her business model has always been important to Christina.

"I was raised by the most incredible giving women," she says. "Giving nearly to a fault. Giving back, the spirit of sharing and caring is something that is built into my DNA." In fact, celebrating this, "spirit of giving," is something that is integrated into many of Milk Bar's programs and events. In 2012 Christina established Karlie's Kookies alongside a good friend, supermodel Karlie Kloss, as a line of "fashionably philanthropic baked goods." To date, sales from the line's Perfect 10 Kookie have provided half-a-million meals to people through FEED Projects and their most recent creation, the Coco Kookie, partners with the Council of Fashion Designers of America to provide support for young American fashion designers.

What inspires her personal creativity? Christina says that she thinks of "creating" as walking to the beat of one's own drum. But that doesn't mean being different simply to stand out. "It's incredibly important to check your idea at the door and be honest about it," she says. "A good idea is inspired, honest and pure. An idea must be fleshed out; it must be the most delicious inception of the idea."

So, sure, the all-you-can-eat chocolate, caramel and cookie dough are the ingredients of a "dream job." But as Christina and her team at Milk Bar prove, what actually makes the dream a reality is when the pursuit of personal passions is combined with honest creativity, respect and giving back to others. Because only when one isn't solely focused on themselves does life become that much sweeter. Pun intended!