Sometimes greasy fries can come in handy, and not just for staving off a hangover.

Tri-State Biodiesel, a Bronx-based company, turns grease collected in city restaurants into biodiesel fuel that powers trucks and heats buildings. The firm provides a sustainable model for the growing number of enterprises that enter this still small market. The United States produced 60 billion gallons of diesel fuel last year but only half a billion gallons of biodiesel.

"We had to raise $2.3 million to get the company off the ground in 2005, but now we are profitable," said Brent Baker, 40, CEO of Tri-State Biodiesel. The company has over 40 employees, some of whom are former homeless people graduated from the Doe Fund program.

"We have ten teams that visit about 30 businesses each on a daily basis; we're pretty busy," said Boss Williams, the company's fleet supervisor, while pumping a barrel of grease collected at Marimoto into his white truck. "It feels good to do a job that is actually helpful to our environment."

The chicken-fried fuel produces 80% less pollution than diesel. It cuts sulfur, which causes smog and acid rain, by 100%, and it reduces particulate matter that can cause lung cancer, according to the U.S. Environmental Protection Agency, by 50-75 percent.

Tri-State hauls the used oil to Hunts Point in the Bronx, where it removes food scraps and water from the mix. The grease then goes to an upstate refinery.

"We purify the oil through a chemical process that uses methanol and sodium methylate to strip the glycerin out of the oil," Baker said. "It changes the chemical composition of the product to something very similar to diesel fuel."

Tri-State sells a biodiesel blend to more than 100 buildings across Manhattan, Brooklyn, Queens, and the Bronx. More than 300 trucks run on the company's output. Recently, a Sunoco station in the South Bronx installed four nozzles to fill up vehicles on the Tri-State product.

Mark Ehrhardt, 44, owner of the Brooklyn-based firm, Movers, Not Shakers, has been using Tri-State bio-fuel successfully since the company hit the market. On a recent night while Ehrhardt was at Kennedy Fried Chicken in the East Village waiting to get his fries, the Tri-State truck came by to pick up the restaurant's used grease.

"That's gonna become reusable fuel and may very well be pumped into my own tank in a week," he noted. "That's pretty cool."

Anyone who wants to donate used cooking oil or buy biodiesel can check the Tri-State Biodiesel site. 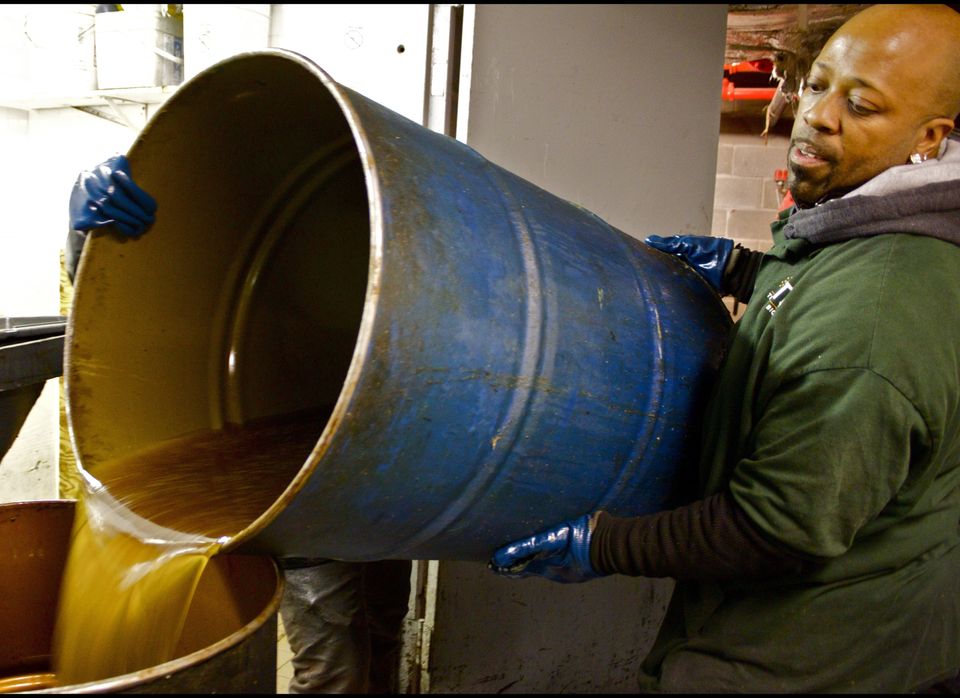