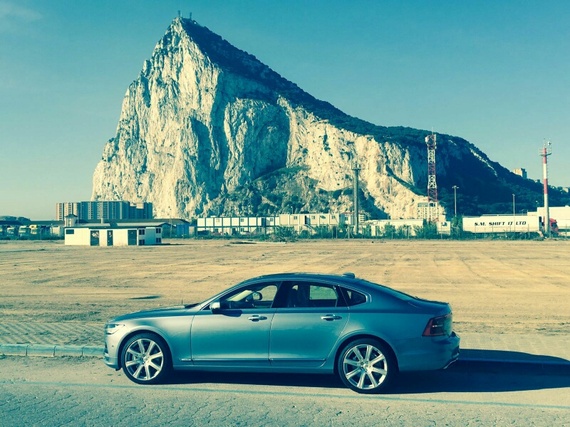 Come July, Volvo lovers everywhere are going to have just a little more to be excited about. That's when the 2017 Volvo S90 will be rolling onto the floors at a dealer near you. A game changer on many levels, I discovered this classy little sedan a few weeks ago in the southern part of Spain where the roads were the perfect combination of curvy and straight highway driving for an experience that lived up to the expectation.

First of all, the 2017 Volvo S90 shows a commitment as strong as ever in a lineup that continually touts Volvo's Vision 2020 in which nobody will be killed or seriously injured in a new Volvo by the year 2020.

The 2017 Volvo S90 is an all-new model and the competition includes the Audi A6, BMW 5 Series, Lexus GS, Acura RLX and the Infiniti Q70. Whether you want to check out the T5 or T6 the T6 can be seen and driven in July and the T5 will be available in September.

On the T5/T6 S90 Momentum trim you get a 19-inch option on the wheels, but the standard is the 18-inch 5-double spoke alloy wheels on the T5 and the 18-inch 10-spoke turbine wheels on the T6. Standard equipment also includes Pilot Assist, which is a semi-autonomous drive system, collision avoidance, a high gloss black grille with chrome frame, LED headlights and a power sunroof with sunshade, leather upholstery, dual visible tailpipes with chrome sleeves on the T5 and dual integrated tailpipes on the T6, a nine-inch Sensus touchscreen, Sensus navigation and keyless entry and drive.

On the Inscription trim of the T5 and T6 you can opt for 20-inch wheels instead of the 19-inch standard wheels as well as full LEDs with bending lights, a silver waterfall grille with a chrome frame, high gloss inscription chrome on the lower door strip, linear walnut inlays, perforated soft ventilated Nappa leather, a leather instrument and upper door panel, power side support and cushion extension, sun curtain rear doors, four-zone electric climate control and cooled glove box and laminated side windows. 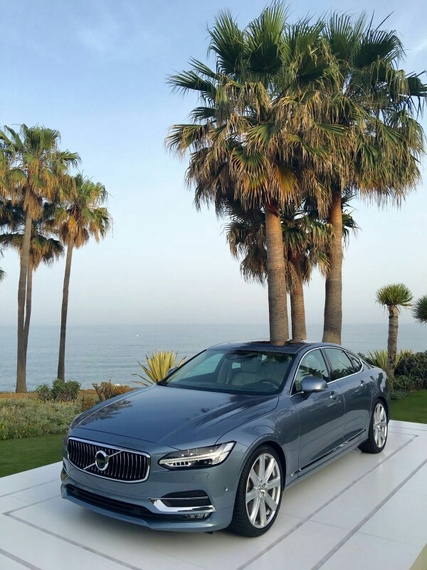 There are a number of different packages that are optional on the T5 and T6 or you can choose to take advantage of the single option add on features as well. Single options include metallic paint, heated front seats, iron ore inlays, a leather steering wheel with a wood inlay, rear air suspension and 4C chassis, a Bowers and Wilkins sound system with CD player, a heads up display and the variety of wheel options.

Under the hood the 2017 S90 will have the same engine as the XC90. Take note of the 2.0-liter supercharged and turbocharged engine that has 316 horsepower and 295 pound-feet of torque. You get an eight-speed automatic and the T5 comes with front-wheel drive or the T6 with all-wheel drive.

Remember that Volvo is all about safety so besides the many standard safety features that are included in 2017 this Volvo S90 sedan will also offer what is called the large animal detection with autobrake. This feature is a "world first" and certainly keeps Volvo in line with the company's Vision 2020 pledge.

Legroom and headroom is not bad in this sedan. For example in the back seat you get 35.9 or in the front seat 42.2 for room to move around. If you opt for the sunroof this feature does cut off a bit of the headroom needed for the taller passengers sitting in the rear. As for the cargo space, that comes in at 17.7 cubic feet but the seatbacks can also flip for pass through ability.

If you like the Scandinavian style and no-nonsense attitude then you are going to love this Volvo offering on so many levels. There is real wood and metal that has been used for the interior and the controls and functions are easy to use and navigate.

Speaking of navigation, the infotainment system is easy to manipulate and the Sensus Touch system keeps the entire structure working with ease. Built on the same platform as the Volvo XC90 SUV, this midsize sedan has a nice clean look and an easy ride that speaks to the idea of enjoying that "special" time in your car. Since I spent several days discovering this Volvo in the south of Spain I was even so bold as to take it to the narrow streets of Gibraltar one afternoon finding that the time spent there was a success in driving.

So it is true, in the 2017 Volvo S90 you will enjoy that time away from the world in your own little driving paradise. Add to that the massage seat function for the driver and passenger and you take comfort to a new level. Beyond that, well, the support and attention to detail is the real reason why Volvo's new sedan offering is a head turner on many levels.

Should You Need to Know: The 2017 Volvo S90 is offering a new color called Muscle Blue along with six additional metallic and two solid color options.

To hear more about Rita's travels listen to her every Saturday night on WTIM radio at 7 p.m. CST or visit http://theinsidermag.com for archived episodes.

The writer and photographer/videographer has no financial stake or professional relationship with any brands - auto or travel destinations -- that they write and photograph and the opinions in all articles are solely their own as are the photos/video.

More:
travelvolvo
Newsletter Sign Up
An essential daily guide to achieving the good life
Subscribe to our lifestyle email.
Successfully Subscribed!
Realness delivered to your inbox