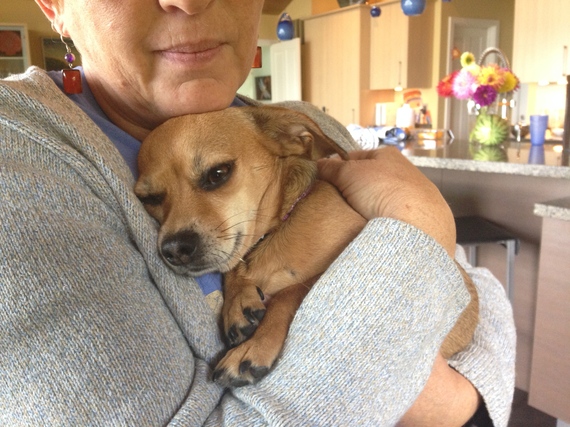 The other day I was playing with my dogs in the kitchen. Gracie is a 9-pound Chiweenie (chihuahua-mini dachshund mix) who is technically my grand-dog, and Luke is a 70-pound yellow lab who is 15 1/2. Technically, Gracie is my grand-dog. She moved in and took over when our eldest son was at college. Admittedly, I look forward to seeing them each morning. It's possible that I really love the way they dance at the sight of me, and race over to kiss me each time I enter the room. Is there something wrong with enjoying their adoration and the fact that two people dogs are so happy to see me every day? Since my two eldest kids graduated college and left for parts far away, it's only me, my husband and our youngest son. However, he graduated high school in June and between his job and classes at the community college, he's barely around.

So maybe the dogs have moved up in my affections. Maybe I spend a little more time pampering them than I used to. Perhaps they fill a hole, now that I'm not needed as a mother, the way I was for the past 24 years. Admittedly, there was a time when I told people "I am Luke's owner, I am A's mom." I spoke to my dogs with a kind but commanding voice; I loved them, but they were my pets -- not my children.

So there I was in my kitchen, doing my morning routine with the dogs and my son came in and said: "Mom, you sound just like Grammy!" (Imagine that voice sounded like that slow-motion movie voice that suggests distortion.)

"Are you kidding me?" I glared at him, as he poured his cereal. "I don't sound anything like my mother-- Grammy!"

"Yeah, you do," he said, with the smug confidence of one who has recently graduated high school. "You're talking to the dogs just like she always talked to her dogs."

And before I could cut him off, he said it: "You're using that weird little baby voice she used all the time." (Add to the slow-motion movie voice, the music from "Jaws".)

I wanted to argue with him, but as I sat there with both dogs curled against me, staring up at me with mad love, I found myself speechless. I had in fact been talking in a baby voice.

But let's just pause here for an evidentiary aside -- it's not hard to see why someone might use baby talk with these adorable faces! Meet Luke and Gracie. 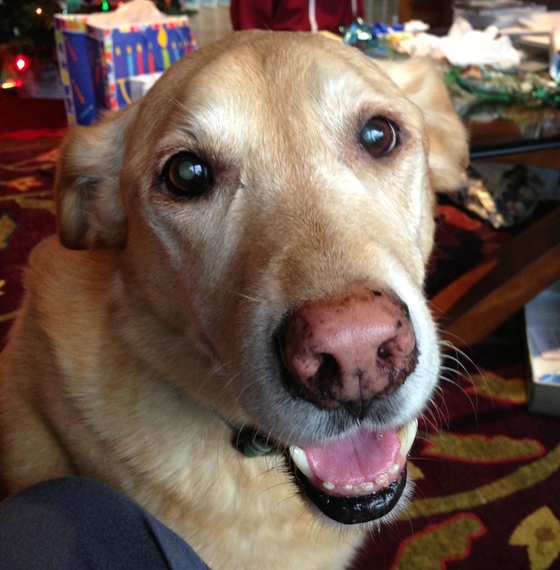 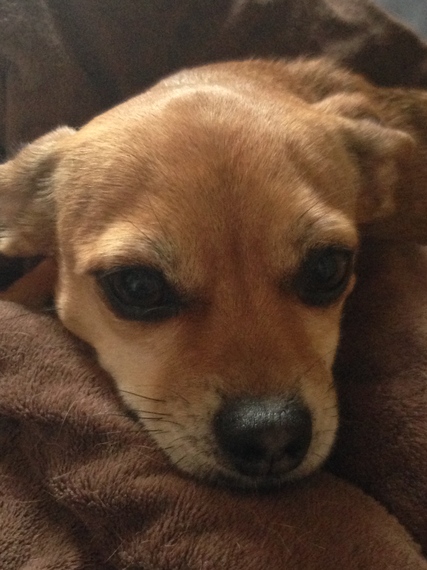 My guess is that at this very moment, you're looking at those adorable faces and saying something along the lines of: "Oh my gosh, what cutie pies!"... in a baby voice. Oui?

Karma's a bitch, and let me tell you, it's been biting me in the ass pretty regularly these days. It's like I turned 50 and became my mother almost overnight -- and not in the most flattering ways. I seem to be developing many of the very habits that I gave her a hard time about... for years. I hated the way she talked to her dogs. It was the same baby voice she used on me when I was a kid and teenager, and my feelings were hurt, or I was brooding about something that seemed enormous to me, at the time. "Honey, what's the matter? Nobody asked you to dance?" This, said in some distorted little girl-vixen, semi-Marilyn Monroe-ish voice that drove. me. crazy! My mom had mastered this voice; it was one of her trademarks. She used it on her children; she used it to be funny, or to get her way- and she used it with her dogs. By the time I was an adult that voice was used primarily for the dogs in her life -- who she referred to as her children, or her grandchildren. In fact, I'm fairly certain I never heard my mother talk to her dogs in any other voice.

I would clench my teeth each time I heard it.

Yet there I was, sitting on my kitchen floor and talking to Gracie and Luke just like my mother would have... once my son left the room again.

It's not bad enough that I seem to have inherited the same wrinkles around my mouth, her bad knees, or the same weight distribution around my middle. I didn't get her lovely hands or her gorgeous silver-white hair. But the baby voice is something I spent my entire life running away from -- there was something about it that cut to my core. It left me feeling dismissed and foolish. Now, admittedly, it's become the very voice I use when I greet my pups each morning, or get their meals, tell them how adorable they are, or call them... I use it with love. Hmm...

Could it be that the baby voice is about more than a bad habit I inherited? 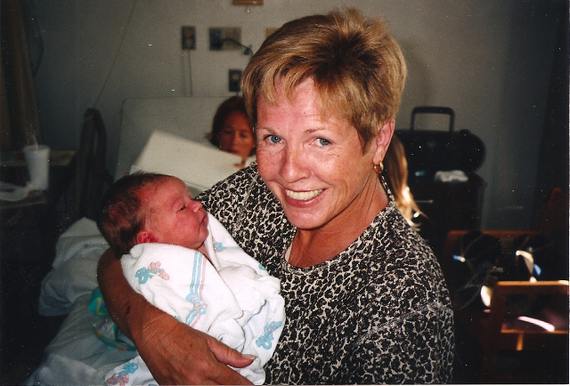 The truth is: I didn't really start using this voice until my kids were grown and leaving me, and my mother had died. In fact, both of those things happened around the same time. My mother's death from Huntington's Disease came at me fairly unexpectedly and blindingly fast, three years ago this New Year's Eve. She fell in October 2011, broke her elbow, and died three months later. Yes, a broken elbow -- but really it was years of watching herself disappear into an incurable disease. Even the baby voice failed her, in the end. My oldest child graduated from college a few months later, and in short order moved overseas. In the three years since, my sons have graduated from college and high school. While one is still at home, the other is in Australia for a year.

Is it any wonder I am treating my dogs like the babies I've lost? Using a voice that is a tangible link to a mother who left me far too soon?

But does this make me the cliché I've always disdained? Or, are we all destined to become our mothers and fathers? Are these traits we take on just something that we unwittingly adopt, as we age, to keep us tied to the people we miss? It seems that since hitting "middle age," I'm constantly hearing this friend or that one say: "I look in the mirror and see my mother/father," or, "I heard my mother's voice come out of my mouth!" Are we just destined to pick up our parent's traits and habits- good or bad? Or, do we unwittingly cultivate certain things?

Mom dancing through her last couple of years...

I know that each and every time I use baby talk with my dogs, I too recognize the parallel to my mother and the voice I hated so much. The fact that my views about my mom have softened with her death and these years without her, is very obvious to me, and makes this comparison to her much less antagonistic than it was when she was healthy -- when the sound of her baby talk was like nails on a chalkboard -- and I didn't get it. Perhaps it's part of me forgiving her the things that I judged her for when she was alive... or, maybe this is just the start of my slide into decline -- and my own kids' chance to prove that karma is alive and well!

Do you sound/look/act more and more like your parents as you age? What do you do that you thought you'd never do? Share your thoughts and stories, in the comment section; I'd love to hear from you. To read more of my work, check out: Tales From the Motherland, Twitter or Facebook.