Our children are 7 and 10. We blinked, and they went from screaming newborns to full-fledged young men. I've spent the better part of the last year replaying the past 10 years in my mind, wondering where the time went -- and unexpectedly, I'm filled with regret.

Let me explain. Our first child was born, and when he was 10 months, the pediatrician told me he had speech delays. Suddenly, the colicky child who wouldn't speak, but only threw tantrums, began to give me cause for concern. You know how it is with the first-born -- you worry all.the.damn.time. Add a developmental delay, and it abruptly multiplies. We moved around his first birthday, began building a house and trying to have another baby. Which, if you haven't done any of those things... it's pretty dang stressful. During these years, I started taking our son to therapies, speech and occupational, with little movement on the speech. Suddenly, he was seeing doctors for these delays, and having tests run -- more worry.

If you are in this position, people will tell you that your kid will grow out of it, that something will suddenly "click" and everything will magically be OK. Until it's not. When you know in your gut, regardless of what anyone tells you, that something is not right with your child. You just know.

Then, the day came -- I was carrying our 6-month-old son and coaxing our oldest into a doctor's office for a third opinion. But, we knew: he is autistic. That night, after putting the children to bed, I crawled into the bath and cried. I cried because of the unknown. Would he be OK? Would he grow up to be happy? Five years later, we got the same diagnosis for our youngest child, and I crawled back into that same bathtub and cried again. Not because of the unknown, but because of the known. I knew how hard it was going to be; I was years into living with another child with similar issues.

And then I woke up about six months ago and realized that in my attempt to get them to those next milestones, I've missed out on the moments in the present. All of the laughter, joy, smiles, and snuggles were overshadowed by worry. All of the magic moments, gone in the blink of an eye.

We visit the beach often, and it does wonders for the boys. I took this picture and I realized when looking at it later that day that I had captured it: the magic moment of a milestone of them loving being children. No therapies, no therapists, no doctors -- just them and the great big ocean with towels that acted as superhero capes. This was one of those moments I was in danger of missing, but I realized it before it was too late. 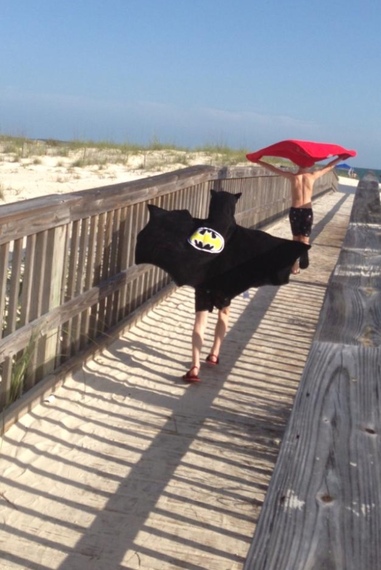 So this year, I am taking my biggest regret -- not living in the present with our children -- and addressing it as my New Year's resolution.