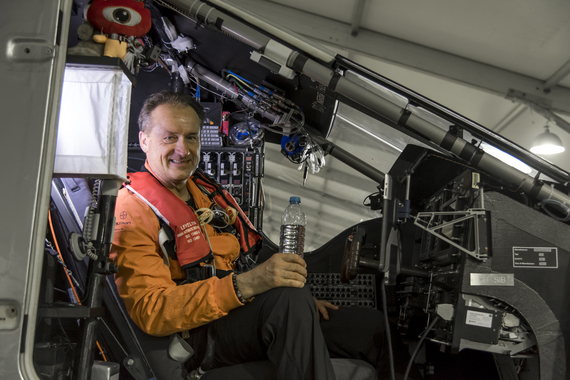 There is a well-known Chinese proverb that states: In every crisis, there is opportunity. But as many leaders know, in the middle of a disaster it feels impossible to think beyond the challenge at-hand. I've had the chance to refine this skill on many occasions as the CEO and co-pilot of Solar Impulse, and want to share some of the lessons I've learned.

Solar Impulse is a feat that the aviation industry claimed was impossible: we had to push the limits of technology and develop new solutions to build a plane that could fly day and night with the sun as its only source of energy. To achieve this, the aircraft was designed to be the size of a Boeing 747, weighing no more than a passenger car. This meant building an entirely new aircraft, unlike any available in the marketplace. Very quickly we decided to build two, knowing that the first attempt does not often result in the optimum solution.

In 2012, while Solar Impulse 1 was performing the "Crossing Frontiers" flights in Morocco, the engineers in Dübendorf, Switzerland, were performing tests on the spar for the new aircraft. Solar Impulse 2 (Si2) would built to depart on a mission to fly around the world. When the load (stress) tests were performed on the spar, it literally exploded - shocking everyone!

For those unfamiliar, the spar is the main structural part of the wing, carrying flight loads and the weight of the airplane - think of it like the backbone of a human body. It takes one year to design and another year to build it. Cracking the spar during the final load test was going to cost Solar Impulse a year of financing, assuming that the team would quickly asses the reasons of the failure. The entire project was at risk financially and technologically.

This was a transformative moment for me, when I moved from explorer to leader: instead of lamenting that we lost a year, I began to say we gained a year and challenged the team to think about what we might do to prepare for the solar flight around the world. This new perspective freed the team from only considering the obstacle to now considering the opportunities.

I made the decision to transport Solar Impulse 1 to the United States for a flight from California to New York. This was an important milestone in aviation history and something Bertrand and I had always wanted to do - bring our mission to life for those in the Americas.

On this journey, we met Goggle's Co-Founder, Larry Page, who brought Google on board as a partner. Their contributions compensated our financial losses following the spar failure, and just as importantly, provided us with tremendous communication opportunities through Google's platforms. Additionally, flying in the U.S. gave us mission experience and helped get the team ready for the round-the-world flight.

It was still important to find the reasons behind the failure of the spar, but the change in attitude helped overcome the disheartened mood that had plagued the organization. Finding a new opportunity infused the team with new energy.

So, how can other leaders turn obstacles into opportunities?

• Attitude: It all starts with perspective - leaders can allow themselves to be frustrated or disappointed but should never flounder in self-pity or paralysis. Do not spend most of your time on the problems - think of what the new situation can offer as alternatives with the broadest mindset possible.

• Time to empower: A crisis requires a leader's attention and focus, but the team members close to the specific operations can develop the best solutions. By empowering the team during crisis, leaders can identify strong characters and potential future leaders.

The entire idea of "turning obstacles into opportunities" reminds me of a quote from Jeff Bezos, founder and CEO of Amazon.com, who has also familiarized himself with unknown territories: "Any business plan won't survive its first encounter with reality. The reality will always be different. It will never be the plan." In the case of Solar Impulse, the setback was actually a launching pad that only enhanced the project. The introductions to new partners and enthusiasm from U.S. audiences fully prepared us to take on the round-the-world flight in 2015 and 2016.

An engineer by education, a graduate of Massachusetts Institute of Technology and an entrepreneur, André Borschberg has solid experience in creating and managing companies, as well as in flying. As co-founder of Solar Impulse, his passion for aviation and his interest in innovative solutions have led him to develop the strategy to design and build the Solar Impulse airplanes.