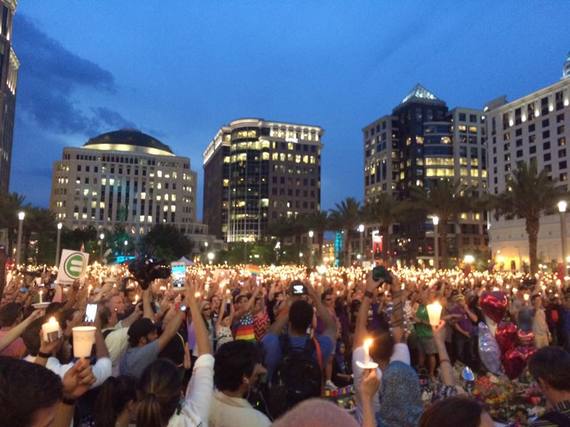 I don't cry about the news. Mass murders, celebrity deaths, cholera in Haiti - I always take a moment to think about what a sad state the story reflects and ponder possible solutions, but it's all very intellectual for me. I'm not heartless. Quite the contrary, I'm a social worker and have devoted my life to service, but in order to be effective, I found I've had to harden my heart somewhat or I would crumble at all the sadness in the world. Then the Orlando shootings happened. I've been living in Alaska for three years, but my first 28 were spent in the sunshine state, in various parts of The City Beautiful (that's one of Orlando's nicknames.) I interned at Grace Medical Home, a community clinic just a stone's throw away from Pulse nightclub. I lived a two-minute walk away and spent many nights dancing there. Orlando is where I grew into a woman, found my passion for human rights activism, and where I still call home. So for the first time in my adult life on Sunday, I cried at the news.

I've been all over the world and have put many people in their place when they thought they knew Orlando, "that place with all the theme parks." I tell them about our great and varied music scene, the myriad artists, poets, lovers, and dreamers, our skilled healthcare workers, the numerous small and creative business owners, the multitudes of cuisines and cultural expressions, our Christ-like volunteers who work tirelessly for the betterment of Orlando's communities, and of course, our smart and steadfast activists and politicians. I've always wanted Orlando's name in lights, but not like this. Right now every story, every face, every time I hear The City Beautiful's name, I cry like an infant. This article's intention is twofold. First, you've heard all about the terror which took place. I want to fill you in on the splendor which happened in the days after. Second, I want to talk about what we can do - individually and collectively - to help with this seemingly impossible issue.

So let's talk about Sunday in Orlando. After the initial shock started to wear off, it was overwhelming the way my newsfeed lit up with friends and acquaintances from back home turning out to help. Blood banks had lines around the block with people wanting to donate. Friends who worked at local hospitals said so many employees showed up they had to be turned away. Many 100s of local mental health practitioners donated their time and professional services to do grief counseling. Spanish speakers lent their time to translate for families of victims coming for hospital visits, funerals, and vigils. Jet Blue, a largely Orlando-focused company offered free flights to family members of the affected. My friends' moms and dads filled up their minivans with water and snacks and brought them to needed areas. One of my friends - who is a talented writer - penned a piece about the attack and the strength or our city in the format of a letter to his young son.

Several of Orlando's LGBT activists got to work raising funds, making outreach calls, and telling the story to media outlets so the rest of the world could know what happened. That night, there were no vigils in Orlando due to police's security concerns, but love and light poured in from around the state, country, and world. Then Monday night, after Orlando police had given their blessing, 1000s of people showed up to pay their respects, show their solidarity, and promote Orlando's strength and resilience. It was a beautiful thing, and I have never been more proud of my hometown. I felt impotent being so far away though and wanted to do something, and writing to all of you seemed like a good start. So, now that I've told you a bit about our great city, let's get into how we can stop this from happening elsewhere.

I have to be upfront about something, though. I used to HATE guns, period. Hunting was dumb, target practice was idiotic, any potential partner of mine could have a life of holding me or a gun, but not both. I thought they were destruction machines and no type was any use to any civilian, ever. Then I moved to Alaska. People here use guns to hunt for food, to protect their families from animals (which is a real and present danger here), and it's an honored tradition. My boyfriend was raised here and learned how to shoot - and respect - guns when he was six years old. It's a big part of the culture, and I suspect there are similar gun users all throughout the country. I get that now, and I don't want these people's guns "taken away." However, it appears to me that a steep divide still exists in our country on this issue. Why can't we all be on the same side? Whether you love guns or hate them, can't we all agree that they should never be put in the hands of someone who means to take an innocent life, let alone 50 at once? And if we do agree on that, then doesn't there HAVE to be some common sense changes we can make to the relevant systems to help deter gun violence in our country?

The United States is the leader in gun violence. Compared to other developed nations, our gun related murder rate is 25 times higher , even when adjusted for population size. What are other developed nations (UK, Germany, Spain, France, Canada) doing that we are not? Low gun deaths in a developed country is possible, even when starting from a place of terror as Australia showed in 1996. Innovation, integrity, freedom - isn't that what our country prides itself on? Why can't we extend our beloved values into such an important issue which continues to affect so many of us? We've taken a big bite out all sorts of public health issues in our country's past. We haven't had a cholera outbreak since the early 1900s. We've taken AIDS from an epidemic with an automatic death sentence, to something far less frequent and which a person can now live and thrive with.

Granted, lowering gun mortality is a complex problem, but what have we done to try and fix it? What are we doing now? Aren't the lives of the free and the brave worth it? Let's examine what leading scholars suggest! Let's look more closely at possible common sense solutions. One option that I find particularly promising (which many developed countries with low gun death rates utilize) is simply requiring a permit to purchase a gun. These often need you to pass a thorough background check, take a safety course, state the purpose for the gun, and require a delay in acquiring the gun while these matters are attended to. I have heard some people say in the US that they find this option intrusive. But isn't a mild intrusion worth it if it can help prevent senseless deaths? Some states within the US already have similar measures in action and have had astounding results. For example, in 1995, Connecticut put a permit requirement in place and they saw a 40% drop in homicide in the coming years. We - as a nation - can also work to prevent guns from reaching people illegally via gun trafficking, re-establish the ban on assault rifles (do civilians really need access to such an extreme killing machine?), and we can keep better records to help gun sellers have more information about who they're selling to. These are just a few of the many ideas out there.

Watching the events of terror unravel in my hometown - even from afar - was one of the most disturbing events of my life. Refreshing the City of Orlando's website every few minutes for 48 hours to see if someone I love had died hurt deep in my bones. This should not happen to one more city. Unfortunately, I know it will (depending on the source, somewhere between 30 - 100 people die every day in our country via firearms ) but it shouldn't. I'm not saying that there are easy answers. But as a nation... can't we agree to try? As individuals, can we start to be more curious? Maybe then we can start to channel our sadness, and our fear, and our rage, into action. What can you do as an individual? Find your state and federal representatives and tell them how you feel and what you want, as one of their constituents. Get involved in politics, elect leaders who want to see this change in our country and are willing to try. If you're not sure how to get started there are many sites which can help, like this one: everytown. If you want to give money to help those in Orlando, I'm including a list of Orlando-based fundraisers being put together for the families of ones lost, as well as local agencies that lined up to help. Alright, that's it from me. Now, let's take all the emotion this has evoked, and use it to ensure this doesn't happen again.