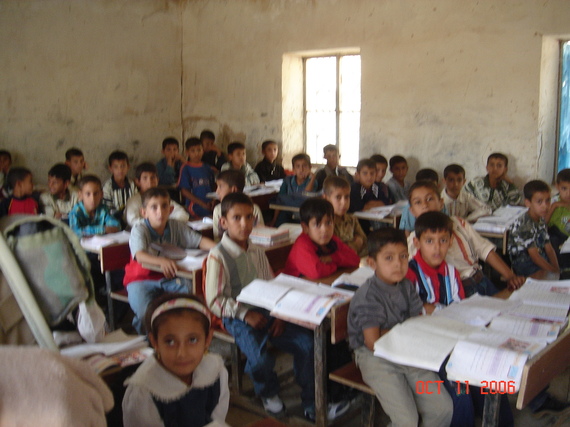 Since the terrorist attacks in Paris, a number of presidential candidates have argued that America should turn away Syrian refugees out of a misguided concern that they would put us at risk. And at least two Democratic governors have voiced some opposition to the current Syrian refugee program.

Republican presidential candidate Donald Trump said he would bar Syrian refugees from coming into the country and, as president, would kick out those who are already here. Retired neurosurgeon Ben Carson said that the Paris attacks have demonstrated that terrorists will pose as refugees to enter our land, although in reality none of those terrorists were actually refugees.

Senator Cruz, a self-styled constitutional expert, proposed to deny Syrian refugees entrance into the United States but to allow entrance to fleeing Christians. New Jersey Governor Chris Christie stated that he would not permit even a five-year-old orphan to come in.

These politicians all argue that accepting Syrian refugees would make America less safe, but there is very little evidence to their case. After all, most of the Paris attackers were actually European nationals, while the refugees are mostly women and children fleeing violence. There is already a rigorous two-year process in place to vet the new arrivals. While the United Nations refers refugees to the United States, we rely on our own agencies including the FBI, the State Department, the National Counterterrorism Center and others to control the selection or screening

But more importantly, rejecting Syrian refugees would actually make America less safe. In fact, it would be another in a long line of knee-jerk mistakes made by well-meaning politicians who have increased chaos in the Middle East and put Americans in harm's way. ISIS wants us to change our policies and portray ourselves as "anti-Muslim," to the rest of the world, instead of welcoming others into our melting pot society while keeping the homeland safe.

Like millions of other Americans, I deployed to the Middle East after the terrorist attacks of 9/11. After suffering a gunshot wound to the head in Iraq in 2006, I returned to the States a lot sooner than I originally anticipated. That being said, I have never felt an ounce of anger towards Muslims or the Islamic religion.

I of course despise the cowardly attacks perpetuated by terrorist groups like ISIS and Al Qaeda in a number of countries around the world, but our biggest mistake is to react to them in a knee-jerk fashion and to play into their hands. I fear that is what the United States is doing right now, and much of it is due to a lack of education and understanding. In the aftermath of the deadly attacks in Paris, politicians from both parties gave in to fear and political expediency - they have taken out their anger and frustration on innocent Syrian refugees, the majority of whom are women, children and the elderly.

For many of us who fought in Iraq, it is hard to bear the news of ISIS capturing cities like Ramadi, which we wrestled from the insurgents through incredibly hard fighting, many casualties, and even more injuries. But we have to face the reality that several key decisions by our nation's leaders created an environment that ultimately allowed ISIS to thrive in Iraq. Numerous reports detail the effects of Paul Bremer's decisions in Iraq to ban the Sunni-dominated Baathist Party and then to disband the Iraqi army, disenfranchising and disempowering two million people, many of whom were armed and well trained. Unsurprisingly, they joined the Sunni insurgency. It is hard to swallow that we ourselves made such fundamental errors and that unintended consequences have such detrimental effects, but thoughtful, sincere discussions require that we acknowledge our mistakes so we do not make them again.

Fast forward to the recent terrorist attacks in Paris and the immediate stampede to curtail our fledgling Syrian refugee program. What concerns me most are the viewpoints espoused and promulgated by many of our presidential candidates--many of whom love to remind us that they themselves are immigrants. These are people who each could be running the most powerful country in the world next year. Their extremely limited understanding of the true threats to our nation and what a mature, educated response to current events looks like is extremely scary to those of us who have ended up on a battlefield due to terrible decision-making.

Perhaps we should examine how the French themselves are responding. French President Francois Hollande publicly stated that France would welcome 30,000 Syrian refugees over the next two years. Compare this to the paltry 1,999 refugees (a mere .05 percent of all Syrian refugees worldwide) the United States has resettled since 2013! President Hollande certainly understands that to let ISIS' actions change France's policies and culture would be extremely short-sighted and exactly what ISIS wants; he also appreciates that while the attack in Paris garnered lots of media attention, ISIS has actually consistently suffered battlefield failures in Western Iraq and Syria over the last year.

As active duty Servicemembers, National Guardsmen, Reservists and Veterans, I believe the clearing the battlefield of people who are fleeing war and war-like atrocities is our patriotic duty. Many of us worked closely with average citizens in Iraq and Afghanistan over the last 14 years, and I know that the vast majority of them are caught between a rock and a hard place. And we all have friends and battle buddies who did not make it back from those deployments. Don't we owe it to those who may deploy in the future, that they do so based on a thoughtful, purposeful decision, and not as the result of the unintended consequence of a poorly considered knee-jerk reaction?