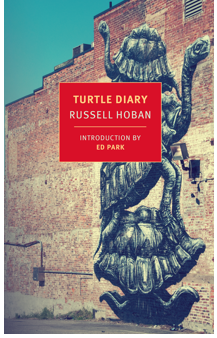 Turtle Diary is a 1975 novel by Russell Hoban about two 40-something Londoners who want to steal three sea turtles from the London Zoo and put them in the sea. These Londoners, William G and Neaera H, tell the story in alternating chapters: his thoughts, her thoughts and so on.

William reflects that "it was the sort of situation that would be ever so charming and warmly human in a film with Peter Ustinov and Maggie Smith but that sort of film is only charming because they leave out so many details, and real life is all the details they leave out."

If Turtle Diary were charming in a wan, safe sort of way (two lonely people do this oh-so-English eccentric thing of freeing the turtles, and life is affirmed, etc), it likely would have sold better when it came out.

However, it would not be back in print four decades later as part of The New York Review Books Classics series.

Ed Park, author of the novel Personal Days and literary editor at Amazon, would not have written in the Introduction that Hoban's novel "is like a lot of things you already like, while being so much its own stupendous thing that it's become one of my literary yardsticks."

Stupendous? Yes it is. It delivers over and over.

Park says that the novel is about loneliness, which surprised me a little. I read Turtle Diary for the first time in the 1980s, after I found it in a Bethesda used book store and it passed the random read test (first paragraph + one other paragraph from middle). I've returned to it several times since, and I never thought it was mainly about loneliness. William and Neaera are lonely -- heck, most of the characters who populate the novel are lonely, as are the sea turtles and the water beetle Neaera keeps in an aquarium, hoping in vain that it will give her an idea for another children's book.

But WHY are they lonely? That question leads to a deeper theme.

At three o'clock in the morning I sat in the dark looking out of the window down at the square where the fountain is not and I thought about the turtles. The essence of it is that they can find something and they are not being allowed to do it. What more can you do to a creature, short of killing it, than prevent it from finding what it can find? How must they feel? Is there a sense in them of green ocean, white surf and hot sand? Probably not. But there is a drive in them to find it. . . .

William is an ex-ad man. He is divorced, and his wife and children have left the country. ("I don't know where they are.") He wanted to quit the advertising business; he wanted the divorce. But now he works in a bookshop, lives in a rooming house and is obsessed with setting the turtles free.

Neaera is a writer and illustrator of best-selling children's books (as Hoban himself was). She is a success. But she can't sleep, she can't write and she too is obsessed with setting the turtles free.

They make me think of the lines from Aimee Mann's song "Wise Up":

You've got what you want / You can hardly stand it though.

There's a video of "Wise Up" from the movie Magnolia. Watching it might make you cry. The pain and the power of the upturn at the end remind me of Turtle Diary.

Like the characters in Magnolia, William and Neaera 's lives are in desperate need of a reboot -- which they get by doing this crazy thing. As William says, "The things that matter don't necessarily make sense."

As Ed Park observes, "Hoban's prose is elegant even at its most brooding, loaded with enough precision-cut lines to fuel your Twitter feed for a month." Hoban achieves this effect without wasting a single word, a sign of how talented he really was.

The turtle tank in the London Zoo:

Sea turtles. Two or three hundred pounds the big ones must have weighed. Looping and swinging, flying in golden-green silty water in a grotty little tank no bigger than my room. Soaring, dipping, and curving with flippers like wings in a glass box of second-hand ocean.

Another border in William's rooming house:

Miss Neap's lavender scent marches up and down the walls like a skeleton in armour.

A state of mind:

I'm always afraid of being lost, the secret navigational art of the turtles seems a sacred thing to me.

A simpler writer would have had William and Neaera fall in love. They would get together in classic romance style, just as the novel faded out.

The ending is happy. But it is not the happy ending you expect.

"Maybe the best book I've read this year." --The Mookse and the Gripes. (One reason I like this reviewer is because he didn't like the movie; neither did I.)

"The book starts off funny, and, while never losing its charm, winds up being moving, earning its place as 'one of the great novels of middle age.'" --I've been reading lately.

"Thankfully, Hoban spurns the pat ending and wallops the reader with the kind of intensity that asks more questions than it answers." --Rebecca Park, Barnes & Noble review

On July 8, 2013, in New York, NYRB Classics and McMally Jackson Books are organizing a tribute to Russell Hoban.