A disabled turtle pulled from a Japanese fisherman's net several years ago has been given a new lease on life with the development of high-tech, prosthetic flippers.

The Agence France-Presse reports that Yu Chan, a female loggerhead turtle, made her public debut in the new flippers -- her 27th pair -- in front of an enthusiastic crowd at the Suma Aqualife Park in western Japan.

Scroll down to see photos of Yu Chan swimming with her new limbs.

The approximately 25-year-old turtle's road to recovery has not been an easy one. Yu was pulled from the sea in 2008, after she became tangled in fishing nets in the Kii Channel, according to National Geographic.

According to Nature News Blog, she was badly wounded, with half of one forelimb and a third of another gone. Teeth marks could be observed across her body.

Concerned citizens rallied to Yu's defense, and a fund was set up to aid her recovery, as well as help pay for the development of her prosthetic limbs. National Geographic writes that research and development of the turtle's new limbs were aided by the Sea Turtle Association of Japan and top prosthetic limb manufacturer Kawamura Gishi.

Despite strong backing, the team working to create new flippers for the loggerhead had many challenges to overcome. "[T]urtles have fragile bones, and their limbs must be flexible for land or sea travel," reported Nature News Blog in 2009.

Whereas earlier versions of the prosthetics were "squeezed into the stumps" and were apparently painful when worn, according to the AFP, Yu Chan's new flippers are attached to a soft vest that slips over her head.

"We have worked hard to design the vest in a way that prevents the turtle from taking it off unwittingly," Naoki Kamezaki, aquarium curator and director of the Sea Turtle Association, told the AFP. "Ours may be the only case in which a turtle with artificial limbs is still swimming without a problem."

According to the National Geographic, loggerhead turtles are the largest of all hard-shelled turtles. Primarily carnivorous and capable of traveling long distances, they have been threatened since 1978. 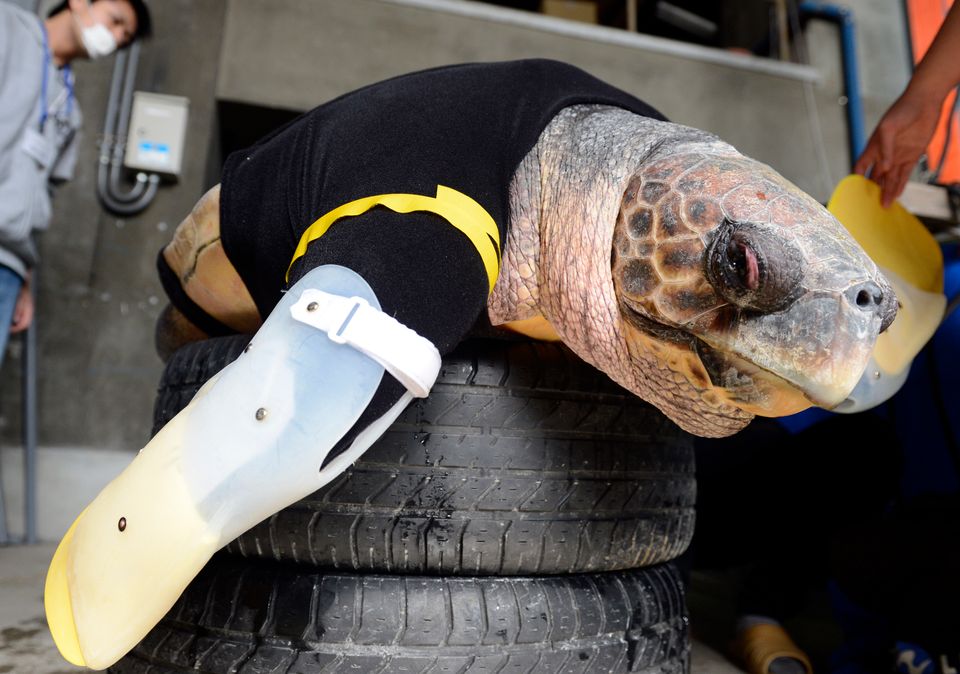