The wholly unofficial term "Super Tuscan" was once a convenient media catch phrase to sell expensive, non-traditional blended wines like Sassicaia, Tignanello, Solaia and Ornellaia, and it worked well until anyone and everyone in Tuscany started to call their wines Super Tuscans, even though the best vineyards were already owned by producers like Antinori, Ruffino, Frescobaldi and a few others who now shy away from the term.

The Italian government hasn't made things any simpler, at first prohibiting the iconoclastic new wines from carrying anything but a designation of "vino da tavola" (table wine), then, in 1994, coming up with "I.G.T." (typical of the geography), for such wines.

Some of the most illustrious of the original Super Tuscans were from the region of Bolgheri, south of Livorno in western Tuscany near the Tyrrhenian Sea. Not least among them was the Bordeaux-like blend Sassicaia, which was at first simply labeled "vino da tavola" in 1968. But in 1994 both Bolgheri as a region and Bolgheri Sassicaia received a legal designation of denominazione controllata d'origine (DOC). 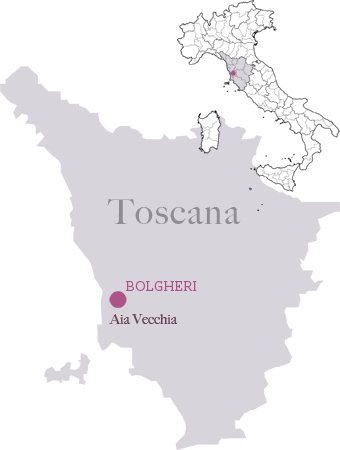 So now that the "Super Tuscan" name has faded, more wineries are proudly marketing their wines as from Bolgheri, whose hillside vineyards and cool sea breezes make for distinctive terroirs and allow the propagation of excellent sangiovese--Tuscany's most traditional and famous grape--along with merlot, cabernet sauvignon, cabernet franc, and petit verdot, which have for centuries been the varietals blended to make Bordeaux wines.

Currently there are 38 members of the Bolgheri Consortium, spread over 2,650 acres. One of the best is the forward-looking Aia Vecchia, owned by the Pellegrini family, which produces four wines, three reds and one white, made from two estates comprising 118 acres, with 74 acres under the Bolgheri DOC.

I had dinner in New York with the young--twenty-six years old--scion of the family, Elia Pellegrini, who looks very much like the professional soccer player he was not long ago, before joining the family business. Affable, earnest and fluent in English, Elia is typical of the Tuscan youth who have been driving the wine industry to experiment while retaining all the traditions that have made Bolgheri so prestigious.

Aia Vecchia, which means "Old Governess," has really developed its portfolio only since the 1990s and in the past decade has gained global distribution as far away as Zanzibar.

Over a diverse meal of cold salumi and cheeses, ravioli with duck confit, sautéed calf's liver with onions, and roast pork at the Theater District restaurant Orso, we drank three Aia Vecchia wines: first the Vermentino 2013 ($12), a fresh white wine with a charming bouquet and good citrus qualities that can serve as easily as an aperitif--the alcohol is 13 percent--as with antipasti like the sausages and mozzarella we enjoyed. Since it spends only four months aging in stainless steel and two in bottle, it is a wine to be enjoyed right now with no need to wait.

Lagone 2011 is, at $15, amazingly well priced for a Tuscan wine of this caliber. I scribbled down on my notes that "it tastes like wine," which I mean as praise at a time when so many wines are made to taste like high alcohol fruit punch. Here, the blend of 60% merlot, 30% cabernet sauvignon and 10% cabernet franc has the lusty character of what a Bordeaux-style Italian wine shows at its best. Under the eye of winemaker Tibor Gál, Lagone spends 12 months in oak barriques and six in bottle; although it can certainly mature further, there's every reason to enjoy it right now with a rich pasta or red meats. At 13 percent alcohol it is nicely textured and layered in its components.

The first varietal gives the wine its body and tannin, the franc rounds it out, and the petit verdot provides fruitiness and acid, all adding up to a very well-priced red wine that would be an ideal match for red meats and, now that autumn is here, game and white truffles.

The wine ages at least 18 months in barrel, then another year in the bottle, achieving at least 13.5 percent alcohol, although Elia Pellegrini told me that due to climate warming, it's not always easy to keep the wines at that level.

So for those who have only dreamed of tasting Super Tuscans like Sassicaia selling in excess of $150 a bottle, the acquisition of a wine like Sorugo will tell you nearly as much about modern viticulture in Bolgheri.

Get These Big Instant Pot Discounts On Amazon Prime Day