Forgive the pun, but in Tuscany there is more ferment going on than anywhere else in Italy right now. Driven by critical praise for its highest quality wines like Brunello di Montalcino and the so-called "Super Tuscans" like Solaia, Sassicaia and others, Tuscany's wines also float on the region's aristocratic reputations of estate owners like Incisa della Rocchetta, Piero Antinori, and Frescobaldi -- all marquis -- and Baron Ricasoli.

Their money (the Antinoris are a banking family) and innovative spirit radically changed Tuscany's image as being awash in cheap Chianti to that of Italy's premier wine region, all built on the native sangiovese grape.

One of Tuscany's great sangiovese-based wines that has not yet gotten its due is carmignano, a blend of at least 50 percent sangiovese, up to 20 percent cabernet sauvignon, plus 20 percent caniolo nero and five percent mammolo and/or colorino. Though not as powerful as its Tuscan cousins whose grapes come from lower altitudes, carmignano has firm tannins, slightly lower acidity and a great deal of herbaceous aromas.

The family intent on changing carmignano's reputation is indeed blue blooded: In the 1920s Count Alessandro Contini Bonacossi purchased the Capezzana estate and soon started putting its wines in Bordeaux-style bottles, rather than the straw-covered flasks of the past. 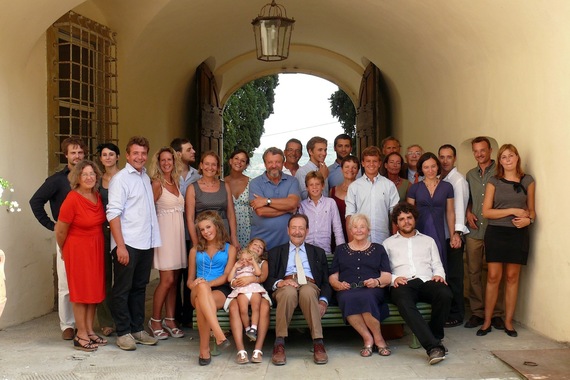 Capezzana has also been testing out biodynamic viticulture and by 2015 expects their vineyards to be certified 100 percent organic.

The driving force and ambassador behind Capezzana now is Countess Beatrice Contini Bonacossi, who, in person, prefers to be called simply Bea. (In the family photo above, she is just to the left of the open door.) I met her for lunch in New York and we spoke about the advances being made in Tuscany and at her family's estate. "As we four siblings are now in charge of all key areas, we take a holistic view and hands-on approach to management," she said. "We agree to disagree, but we all see the future as evolutionary versus revolutionary." Her sister Benedetta is the winemaker, her brother Vittorio in charge of the vineyards, and Filippo handles the finances and the company's olive oil business. 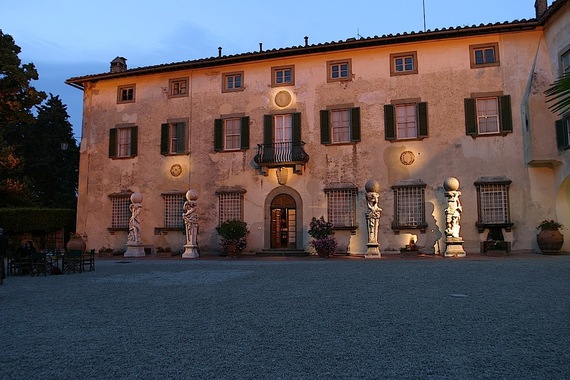 They also run tours of the property, with its 16th century wine cellars, and you may even rent one of their historic villas there. And, if you're in Florence, nearly half their vast art collection is on view at the Uffizi Gallery.

Still, says Bea, "We are always conscious of the cost of our wines, and our sales rise because we do not price ourselves out of the market for Italian wines." Evidence of this intent is their $12 Monna Nera 2012, a wine "for young people," light, fruity, with a little peppery bite. So, too, the $15 Barco Reale 2010, which is 70 percent sangiovese, is called a "baby carmignano," and is delectable as an every day red wine.

As the wines move up in price, style, finesse and complexity come into play, as in the superb single vineyard blend Ghiale della Furbia 2007 ($55), made from 60 percent cabernet, 30 percent merlot for softness, and a sprightly 10 percent syrah. The vineyard was planted with cuttings taken by Bea's father from the Lafite-Rothschild estate.

We went through a vertical sampling of Villa de Capezzana carmignanos, beginning with a 2008 vintage ($30) with an exceptionally high 14.5 percent alcohol, due, said Bea, "to changes in the climate we have noticed since 2000. We left the grapes on the vines longer to perfect them."

Oddly enough, a rare 1968 Riserva ($300), made from 65 percent sangiovese, 10 percent cabernet, 15 percent canaiolo and 10 percent "complementary grapes" tasted fresher than the 1988, though it was curiously thin, perhaps reflecting carmignano's lighter body in those days. 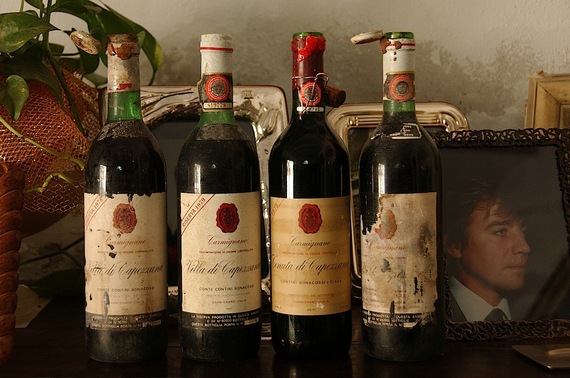 By the way, Capezzana also makes a superb vin santo, produced by allowing the grapes to "bake" in the upper room of the winery (left) till they become raisin-like and to produce a rich, viscous sweet wine they call Vinsantia. But times have changed and carmignano seems poised to take its rightful place among the best DOCG wines in Italy. With the U.S. Capezzana's largest importer and China now second, the family's challenge will be to produce enough wine to satisfy the market but only enough carmignano to sustain its eminence.