Stan, a 3-year-old feline, is running on the Tuxedo Party's platform and hopes to raise awareness about the stray cat problem in Halifax.

Once a stray himself, Stan's campaign advocates for a city-sponsored spay, neuter and cat care program.

“We have an explosion of cats,” Hugh Chisholm, a retired veterinarian, told CTV Atlantic. “We have literally hundreds, thousands of cats living in the streets.”

Currently, Stan's dreams of running the city may be a long-shot; he lags in the polls and there's one other small problem --municipal law actually bans animals from holding office. But that isn't stopping Stan in his mission to save the city's strays.

All proceeds from the sale of Tuxedo Stan buttons, lawn signs and T-shirts go to a “Spay Day” initiative which helps low-income families spay or neuter their cats.

The aspiring politician's owners decided Stan should run for office after his Facebook page, as the face of stray cats in Halifax, catapulted him to Internet fame, attracting 2,300 fans in only three months. It only seemed logical that the next step would be running for political office.

After the announcement of his candidacy, Stan's popularity has gone international -- he even appeared on Sky News Arabia.

Amazingly, Stan isn't the first cat to run for the mayor's office. Stubbs, the cat mayor of Talkeeta, Alaska, has held office for 15 years, almost all of his life.

Scroll through the slideshow below to see Stan and posters from his campaign: 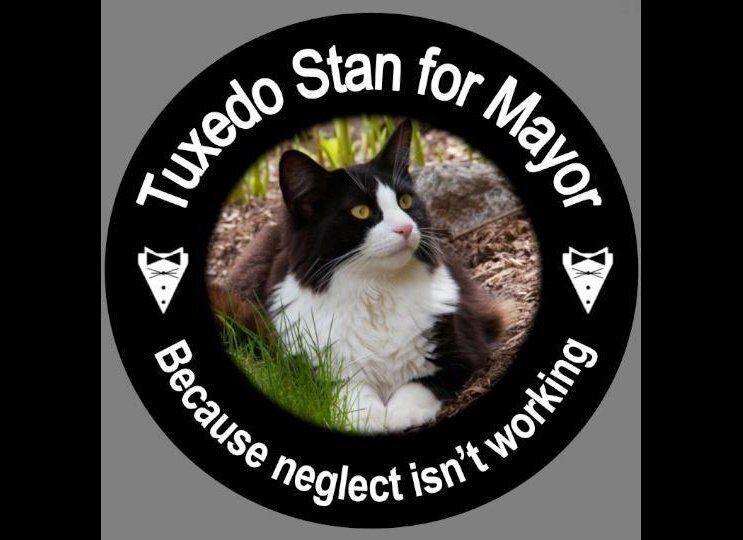