"Sharknado" wasn't enough to keep our attention, apparently. This year Americans are on pace to spend more time on digital devices than in front of their televisions according to a study released by eMarketer on Thursday.

Adults in the United States will spend more than five hours each day on "nonvoice mobile activities," including Internet use on phones and tablets, and about four-and-a-half hours watching TV, according to the study, which looked at data from a variety of sources including academic publications and audience measurement outlets. The average American will spend almost an hour more on his or her phone this year compared to last year, according to the report. 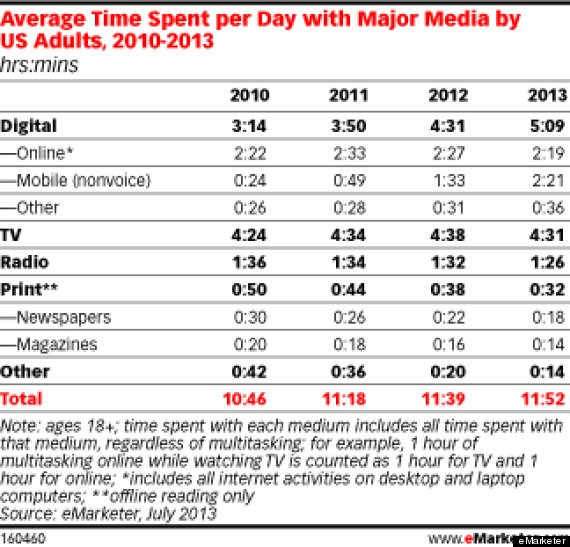 As much as we'd like to heap blame for the change on the poor offerings on television these days (not enough "Breaking Bad" too much "Real Housewives"), the reason behind the shift actually has more to do with Americans' increasing use of smart phones. While the average amount of time spent watching TV and on computers has not changed much over the years, people are spending more time online on their phones.

This year 61 percent of American cell phone owners were using smartphones up from 21 percent in 2010, according to Nielsen.