Recently, I was working on broths. This means intense bone browning, followed by long slow cooking in water with aromatics. At the same time, I was smoking meats. Both projects required my presence, but neither required me to be standing over a stove.

And, so, the TV went on. I have no cable; I can stream or just watch the signals that come through the air.

NCIS:New Orleans: First of all, how do they make New Orleans look so much like Los Angeles? Every time food comes up, it becomes more obvious they have no clue how the locals eat at home. Scott Bakula says: "I've got fresh beignets and Andouille sausage for breakfast."

Where is the pot of oil or the deep fryer? You mean to tell us you have FRESH beignets, and the set decorator hid the evidence while they were still hot? Seriously? Andouille sausage is usually used as part of a dish, not a breakfast sausage, and while it is quite possible to eat it at breakfast, the preparation probably would have been more elaborate.

They just grab onto foods known in New Orleans and jumble them together whenever they like.

Shrimp and grits is brunch or even dinner, not a Tuesday breakfast. Praline bacon is a heavy prep food, and not just stored in the fridge. Next time you mention food or local culture, just give me a call and stop looking ridiculous. 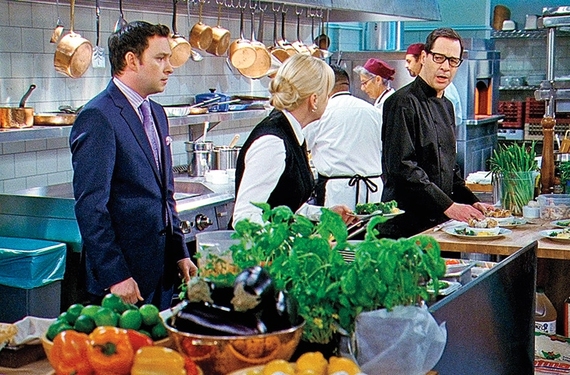 French Stewart in his kitchen with vegetables displayed in bowls by the set decorator.

Mom: First, Alison Janney is a goddess, both in comedy and drama. However, her show daughter, Ana Faris, works in a restaurant designed and run by people who have never been in one. You can still keep your wise-cracking executive chef, but at least get your set designer and extras to pretend it is a real kitchen. Try spraying them with some perspiration.

The Mysteries of Laura: Deb Messing (whom I love) is dating a magic chef. Seriously, he is magic. He can bake dozens of cookies in a working food truck and deliver. They happen to be the exact right cookies, even though they were not fully described during the phone call.

Neal Bledsoe plays the magic chef, and it would appear he did his character research at the gym, not a kitchen.

He works his truck alone, and manages to plate the whole order before they are ordered in such pretty little containers -- that clearly did not come from a truck, and can be displayed.

He also magically creates heirloom eggs. Not eggs from heritage chickens, but heirloom eggs. Now, I must acknowledge that some farm-market-types co-opted this name from heirloom seeds, but a chef would probably not use the term. Oh, and pasteurized eggs for food service usually come in cartons, like orange juice. But in the world of fake kitchens, this is unlikely to matter.

Medical shows have doctor consultants, food can be just as messy. Time to move towards a more realistic fake reality.