In a social media twist on "ET phone home," citizens of Earth are invited to participate in a global Twitter event to send a message replying to an unexplained signal from deep space observed by scientists 35 years ago.

Coinciding with tonight's premiere of the National Geographic Channel's new series, "Chasing UFOs," you can create your own tweet that will be combined with others from around the world and they'll all be transmitted into space back to the area where the original signal came from.

On Aug. 15, 1977, as part of the Search for Extra-Terrestrial Intelligence, or SETI, Ohio State University's Big Ear radio observatory detected a strong 72-second radio signal from the direction of the Sagittarius constellation, shown below. When astronomer Jerry Ehman noticed the unusual spike -- consisting of six letters and numbers -- on the computer printout, he wrote the word "Wow!" in the margin of the sheet. 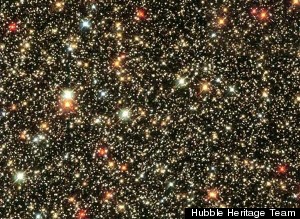 Scientists tried to find this Wow signal again, but it never reappeared, and 35 years later, the debate continues as to whether or not this was an actual alien contact.

And now, any tweets with the hashtag of #ChasingUFOs, created between 8 p.m. Eastern tonight and 3 a.m. Saturday, will be part of National Geographic's bold plan to finally send a reply back into the final frontier of space using Twitter.

NatGeo says you can also upload a short video to add to your tweet by following instructions at their WowReply.com website.

"The idea behind it was to help spark participation in our new show, "Chasing UFOs," said NatGeo spokeswoman Courteney Monroe. "At its heart, that show embraces the curiosity about whether there is life and intelligence elsewhere. We wanted to come up with some sort of social experiment where we would galvanize people to tap into that curiosity."

It's going to be one big intergalactic tweet. After all the global tweets have been collected, NatGeo plans to send them all into space on August 15, the 35th anniversary of the original Wow! signal. 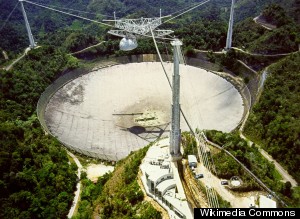 "We're working with the Arecibo observatory in Puerto Rico [pictured at right], the world's largest ground-based radio telescope, which has been featured in many films, including 'Contact,'" Monroe told The Huffington Post. "The experts there will decide how the tweets will be encoded and transmitted."

Several well-known personalities -- Stephen Colbert of the "Colbert Report," sportscasters Joe Buck and Tim McCarver and Jorge Garcia from the TV sci-fi drama "Lost" -- have already created their own personal video messages to be included in the August transmission.

Certainly one video message to potential extraterrestrial friends, which shouldn't be missed, was posted by the reigning Ms. Universe, Leila Lopes:

Here's a sampling of some tweets from fellow earthlings that have begun to accumulate for the Wow! Signal Reply:

Richard C.
You have mastered intergalactic travel & communications. We created Snooki and fight over liquefied dinosaur remains. You win. #ChasingUFOs

Kegan
#chasingufos beam me up scotty.

Zuweina F.
Last time you were here, you forgot Nikki Minaj and Lady Gaga behind. They're ready for pick up. #ChasingUFOs

Chris R.
#ChasingUFOs Though we may be separated by space, as intelligent life you are my brothers and have my respect. Love, Chris.

Drew JW
Hello to the universe, we have cats, cheeseburgers and much pie. #ChasingUFOs

Antonio R.
We want to meet you, shall we have a beer? :) #ChasingUFOs