ISTANBUL -- Four years into a bloody civil war, many Syrians say the revolution that erupted in March 2011 has been all but forgotten by the international community. The deaths of over 220,000 men, women and children seemingly have been eclipsed by murky politics and an obsessive focus on the Islamic State, they warn, while the Syrian regime continues to drop devastating barrel bombs on civilians and run torture prisons.

But one small group of Syrians, armed with a list of tens of thousands of names, is raising its voice to memorialize the dead as the grim four-year anniversary of Syria’s uprising-turned-bloodbath arrives this Sunday.

The initiative, called "How Many More," plans to tweet the names of 100,000 Syrian victims over the next month and a half. Some of its members will read the names of roughly 85,000 more killed Syrians in front of the White House this week.

“It takes three seconds to say 200,000 people have died in Syria but it will take 40 days to tweet half their names; 5 days to read their names,” said Lina Sergie Attar, one of the initiative’s leaders who also co-founded the Karam Foundation, a nonprofit organization that provides educational and humanitarian aid to needy Syrians, most of them children.

Syrians have also seen their life expectancy plummet amid the violence. Before the war, the average Syrian used to live roughly 76 years. Now the average hovers just above 55 years, according to a startling new report by the Syrian Centre for Policy Research, in coordination with the United Nations Development Programme and United Nations Relief and Works Association.

But as the war drags on, attention is focusing less on the humanitarian crisis and the Syrian regime’s continued repression, and more on the Islamic State group, which a U.S.-led coalition is targeting in Iraq and Syria.

“ISIS consumes the media, but the Assad regime's barrel bombs are treated as the norm,” Attar, an Aleppo native who now lives outside of Chicago, said in an email to The WorldPost on Wednesday. “It is not normal or acceptable for any government in the world to deploy an air force to indiscriminately bomb its own people. But the world has decided to turn a blind eye to this crushing, daily brutality and has left the Syrian people to suffer under two terrors: the Assad regime and ISIS militias.”

Attar says she hopes the initiative will encourage people to contemplate, remember, and vow to never forget the Syrian people's ongoing suffering.

In a similar effort to bring attention to the Syrian regime’s crimes, 15 U.N. member states have sponsored adisplay of graphic images at the U.N. in New York this week, showing the bodies of Syrians who have been tortured and killed by forces loyal to the government. 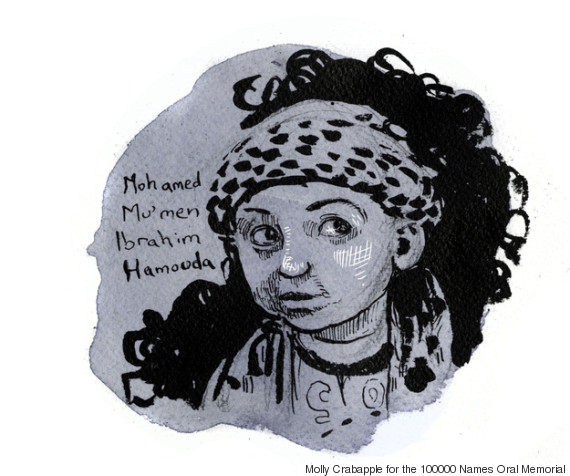 The "How Many More" initiative began its commemoration event in front of the White House Wednesday by listing the names of 1,000 victims of the Islamic State group in Syria.

Attar told The WorldPost in an interview at the event that 13,000 victims of the Assad regime would be named following the list of ISIS victims. On Thursday, the event will feature the names of thousands who have been tortured by the regime, and on Friday it will commemorate the 18,000 children who have lost their lives, she said.

The full list of names tweeted and read aloud by Attar's group was compiled from three opposition-linked sources: the Center for Documentation of Violations in Syria, the Syrian Network for Human Rights, and the Syrian Observatory for Human Rights.

Attar recalled that her group had held a similar, though less elaborate, protest around the anniversary last year. "We were adamant that we were going to read the names whether anyone listened us to or not," she said. "We really did not want to come back another year."

But with no end to the civil war in sight, that is what they have done. Every few seconds, @HowManySyrians posts yet another name of a Syrian victim on Twitter, interspersed with the same message, over and over again: "How many Syrians must continue to die because of the world's hypocrisy?"