For years, frustrated citizens have been tweeting about potholes in their communities in an attempt to call attention to crumbling roads. Now, potholes in Panama City are tweeting about themselves, thanks to a connected device created by an ad agency and publicized by the local news -- and the potholes are actually getting fixed.

This spring, agency P4 Ogilvy & Mather equipped a number of cast-iron plates with sensors and placed them in potholes around the city, then crafted colorful tweets for @ElHuecoTwitero ("tweeting pothole" in Spanish) to publish each time a car drives over a device.

The tweets include a shout-out to Panama City's Department of Public Works (@MOPdePanama), putting each pothole on the radar of municipal workers. In addition, a website, ElHuecoTwitero.com, maps the location of the tweeting potholes.

One Hole to rule them all, One hole to find them, One hole to bring them all and in the darkness bind them @MOPdePanama

This video, created by the ad agency, gives you a window into the process:

The city has been pretty quick to respond to the alerts. A pothole was fixed within 48 hours of the first device being activated, according to Pinky Mon, the Ogilvy & Mather vice president of creative services who worked on the project. In an interview with The Huffington Post, he proudly estimated that between 25 percent and 33 percent of the potholes his agency placed a device into have been fixed.

"We didn't design it to be just a complaint or critique but to pinpoint where the problems were and have something good come out of it," Mon said.

The story of the "tweeting potholes" has gained international media attention in the last month.

"Having the personality to the potholes is what makes the trick," said Mon. "If a guy was there, counting cars hitting the potholes and tweeting, would it have the same effect? The impact of the car, but more than that, the actual effect of the pothole on cars, is what we wanted to communicate to the minister of public works. We personalize it to be lighthearted, not just critical but humorous." 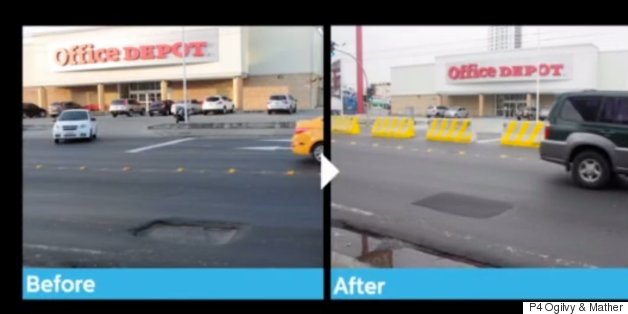 Each @ElHuecoTwitero post anthropomorphizes a pothole, giving it a personality as it "experiences" being driven upon. Contrary to some reports, however, the account isn't fully automated or sending out preplanned copy. According to Mon, a team of two people sits next to each deployed device, monitoring the impacts over a Bluetooth connection and alerting the ad agency, which then composes and sends the tweets from its headquarters.

"On occasions, we've been there when the crew arrives," he said, "with interchange of jokes and weird looks. The whole thing is so famous now that they know they'll be shown up in the news. We take the device out of the hole and they start working."

To date, Mon says that none of the devices, which at 7 inches in diameter are about the size of a large pancake, have been damaged, stolen or destroyed. That's a good thing: Mon told me that the total cost for the 10 commissioned devices was about $60,000. When the ad agency asked for five more units from the technology company in Argentina that originally manufactured them, the bill was $6,000. (Mon says Ogilvy & Mather chose not to buy them.)

When I asked whether @ElHuecoTwitero was an improvement over a resident with a smartphone taking a picture and tweeting it, Mon held that using the sensor to track every impact and personalizing the pothole is what led to a better outcome.

"If it is the hole that is tweeting, it feels like we've given life to an inanimate thing," said Mon. "I think that is what has created all this engagement and following of the tweets. It could have been a person watching, but I'm willing to bet it wouldn't be so popular. I'm sure there exists better tech, but ours is not based on the technology, it's based upon the character it brings."

Could this kind of project work in other cities? Given the cost of the devices, the time of the workers involved, and involvement of professional copy writers, probably not -- not exactly like this, anyway. A fully automated system where a device was connected to a Twitter bot might achieve similar accountability on social media without the dedicated staff. In some cities, the tweets could even lead to 311 municipal services hotlines integrated with Twitter, officially filing service requests.

If "tweeting potholes" do get adopted in other cities, eager civic technologists that want to see similar results should keep one other critical factor in mind: the central involvement of a local news station. Telemetro Reporta, as demonstrated in this news segment that aired on June 8, has been instrumental in tracking the government's progress outside of Twitter. Sometimes, combining one century's major media innovation with the next century's medium of the moment may result in the most salutary outcomes.