It's not so uncommon these days. When something significant happens, you want to share in that moment with your friends on social networks.

On New Year's Day, status updates and tweets flooded Facebook and Twitter in the midnight hour. The graphic above depicts the spikes in tweets per second by time zone. (Scroll down to see a larger version.)

Japan and South Korea recorded the most tweets, shattering the previous Twitter record for tweets posted per second as the clock struck midnight Tuesday. In all, the Japan Standard Time Zone fired 33,388 tweets per second to begin 2013.

This handily defeated the old record of 25,088 tweets per second, also set by Japan during a television screening of the movie "Castle in the Sky."

It's not the first time Japan has set a record on New Year's Day. In 2009, Japanese tweeters began the new year by firing off 6,939 posts per second, a history-making milestone for Twitter at that time.

Japan Crush reports that in one sense, the new record is not surprising, due to the Japanese custom of sending Nengajou, or 'New Year's Postcards.' These are increasingly being posted online.

Twitter wasn't the only social network to see an influx of posts to begin the new year. China's Twitter-like Sina Weibo collected a record 729,571 messages per minute, The Next Web reports.

The graphic below released by Twitter illustrates the tweets-per-second spike around the world as 2013 began. 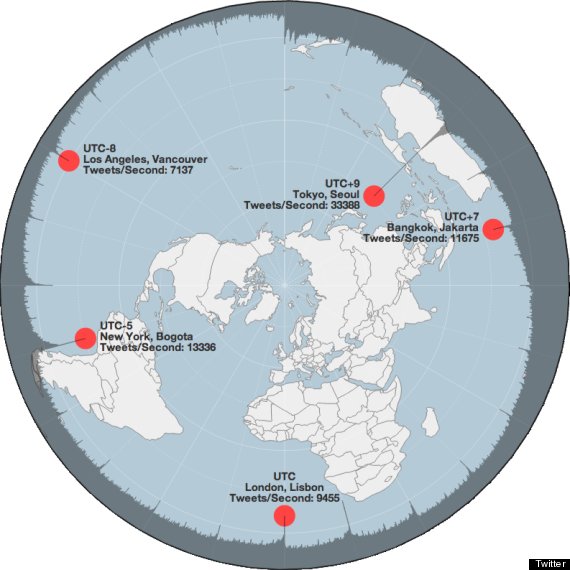