Anger is a complex emotion. It can help us survive (the infant fought off the assailant with her bare baby hands!); it can lead us towards justice (no justice, no peace!); it can make us sick (after years of incarceration, now cancer). So it's only fitting that a play titled Twelve Angry Men, opening this week at The Pasadena Playhouse (cast photo below) would hold some of that energy. 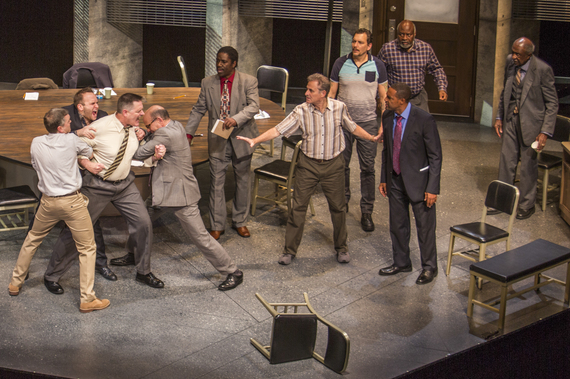 Originally written by Reginald Rose and produced for television in 1954, it's been adapted numerous times for stage and film and is perhaps best known for the Academy-Award nominated feature directed by Sidney Lumet and starring Henry Fonda.

Sheldon Epps, the play's director, says in a press statement:

... our production will incite conversations about racial issues, perception, and discrimination that are at the center of this work. Our production will mirror the very challenges that we face on a daily basis as we still search for ways to comfortably exist 'in the same room' together.

With six black cast members and six white -- as if you didn't get the hint -- the stage is set for a brawl. The anger punches back and forth.

So what then do we do with anger? This is the central question of the play -- where the characters debate the fate of a teenager accused of killing his father. If guilty, he faces a death sentence. Each of the players, informed by class, ethnicity and station in life - by turns oozes with it, hides it, wears it, waddles in it, denies it.

The central tension derives from the want to wrap-up the verdict righto versus the desire of the black hero (played by Jason George) to continue to examine the facts of the case. What's the hold-up? -- soon devolves into every gripe each have ever had with "the other" -- with the white and black cast becoming ever more divided, and the characters growing more and more antagonistic towards each other.

This black-white opposition sounds more 1-to-1 than the play is; "whites" and "blacks" are not presented as having monolithic views. And "race" is very much the subtext that gets revealed as the pressure cooker of time and fatigue does its work. I respectfully disagree with a recent LAT review of the play in this respect. Epps, who is also artistic director at the playhouse, leads the actors to finesse something more subtle and realistic -- the way people act at the end of a stressful day or in private. Tentative jabs graduate to all out insults; taunts escalate to verbal threats. Actions begin to speak for true feelings, as for example, an elderly juror (played brilliantly by Adolphus Ward) is afforded no respect and is dressed down simply for being old. Another juror (Bradford Tatum) punctuates his statement by slapping another (Jeff Williams) upside the head.

I also differ with this LAT reviewer, who feels the play needs an update on Rose's original language; (un)fortunately the words ring true today. Times may have changed, but human nature has not.

Epps has an ambitious project, from these two reviews alone you can see how divergent perspectives can be.

Race is a difficult matter. I often question the motives of those who bring it up, as it seems very often to create more tension than to resolve anything. It can be a kind of catchall for everything wrong with society. Talking about race is a kind of red herring, and what I find most disturbing about it (these conversations) is that they put the "person of color" in the role of victim and the "white" person in a position of power.

Often when I've discussed discrimination -- like I was just telling my editor the other day about a time when a cop car was running my husband's plates - we two black people, driving in the black part of town in a fancy car -- and as I was talking, I could feel my sense of power leaving me with every one of his knowing, journalistically sympathetic nods. I was thinking: I don't want your sympathy! It wasn't his fault of course; it's simply that these conversations put the white person in as a stand-in for the real person who did the offending. It's a useless dynamic. All he can do is be meek and say, yeah we're such a#&holes. Now, if he then rejoined with a similar story of being discriminated against (for his religion, ethnicity or whatever) that would put us on a similar level, but you see how this soon gets political and becomes a huge waste of time because he's not an a#$hole and there's nothing he can do now to have stopped that cop from profiling us then.

And if I were to recount the same story with black friends -- we'd look at each other and telepathically agree that we hate feeling like second-class citizens; we'd grouse about how it's safer to stay with our own, or ironically, as the token black person amongst whites (where by association we'd hope to enjoy the same status). But why should I enforce such a feeling? Why should I contract rather than expand? Misery is easy and it loves company. How is that good?

What did I really want? I wanted to be unaffected by other people (like the cops) -- and later, to speak about my life (to anyone) and not be affected by the audience.

But most of all, I wanted to laugh.

In fact, that's what we did -- instinctively and in defense of our health -- my husband and I laughed. The cop car sped past us (going over the speed limit of course) and he and I laughed and thanked G-d we had such a nice car, remembering the days when we didn't even dream of having one.

I laughed as I told my editor this story, but I don't think he understood what I thought was funny.

They say, when you laugh you are communicating values. People who we laugh with share our values. And in this, I saw cause for hope watching Twelve Angry Men. The audience laughed out loud at a lot -- and it wasn't nervous laughter, it was a good belly laugh. I love that because it hints at the truth: that when we get outside of ourselves and look at the big picture, we can often see how ridiculous we all are.

It seems to me there are three questions at the heart of this production.

1) How do people cloak their real issues?
2) How does this behavior prevent real closure/healing/truth telling?
3) Why are people -- and men in particular -- so angry?

There's plenty of science to show that we are socialized to hide how we feel when it's dangerous and that can be a good thing (don't ever tell your wife she looks fat, even if she does and even if she's asking for your honest opinion), at the same time, it stands to reason that people need to have a proper outlet for expression, to be heard with weightier issues.

But if there is no perceived outlet -- what then? Your truth has no way to be expressed. You have to keep it all bottled up inside. If you're a closet racist you have to find a secret corner and talk with other bigots. You sit and stew watching the TV/Internet/Media that's outside your comfort zone, knowing you can never let you're truth be told to them -- because you're ridiculous, or well, they're ridiculous. You get the idea.

Which would lead one to the second question -- why are people and especially men, so angry?

Men face a particular challenge in expressing emotions. Women - (women, in case you're wondering, largely escape this play -- but you get the feeling that that's just because there's no more air left in the room for them) -- traditionally are encouraged to internalize emotions at great cost. But we do with greater ease say what we feel when we feel safe or have the language to do so. But men are more likely to be socialized to put their emotions in action and to shape the world in their image. This hubristic project arguably had problems from the start but we enable it anyway. And with all these men trying to bend the world with their un-examined emotions, no wonder there are problems.

The Buddhists emphasize mastery of your anger, but the American way is a little more along other lines. That said, the fast paced rat-a-tat-tat of this play echoes the internal banter of one person having twelve arguments within himself, mirroring what's sometimes called the "monkey mind" amongst the meditating crowd.

People get angry at injustice. I love this video because while I don't like scientific experimentation on animals, it's so human. We don't like missing our grapes.

Some of us also do not like to see others treated unjustly because we realize we're all in this together.

Incidentally, in the same TEDTalk, the researcher Frans de Waal (who designed the test above and others exploring animal morality) explains that sometimes the monkey would forgo a reward in protest of inequality (at 15:28).

If only we could emulate monkeys more...

People -- who think they don't care about other people being treated poorly (like the theoretical racist above) -- are actually unconsciously angry about this very same injustice. Why? We all yearn for a little peace and quiet and it's just that some of us are a little confused about what that looks and feels like.

Of course, I'm assuming that I know what is right, but of course I am not always. There is something that the racist person knows that I do not know. Like the voters on that jury in the play, we need everyone's participation; everyone is part of the puzzle. When people keep their ideas to themselves or to those who think like them, their notions go un-challenged. If we only talk to those who agree with us, we each learn nothing.

The hero takes this approach, to engage with the main antagonist -- a juror who is determined to convict the teen of the crime, regardless of the facts or reason. It is the challenge of the hero to help him uncover his true motives: to help 'the other' truly see his own antagonism in order to vanquish it. The antagonist gains understanding; the hero gains compassion.

It's a tall order. Sometimes I feel changing other people is G-d's work, changing oneself, well that's mostly your own. But there are extenuating circumstances -- in the scenario of the play, a person's life is at stake.

In this way, the play is making an underground roadmap for us to begin to dialogue across the aisle, across tribes, persuasions and oceans in hopes that people who think they are opposed can come together.

It also validates the right of those who have edited themselves out of the conversation to speak.

William's character hunches over in a corner crying -- this outward expression of despair to me is the soul of the play. I found it very moving, inasmuch as we so often do not see men, or black men for that matter, letting the sadness they hold come out.

This timely adaptation of Twelve Angry Men is so good for this reason. It shows what processing difficult emotions, like anger, might look and sound like, and how to clear the path for healing. Free the good part imprisoned, and quiet the tiger let loose.

Twelve Angry Men, directed by Sheldon Epps, now at The Pasadena Playhouse, through December 1. Special Q&As after the play on Nov. 19 and 26. Visit for here for details. 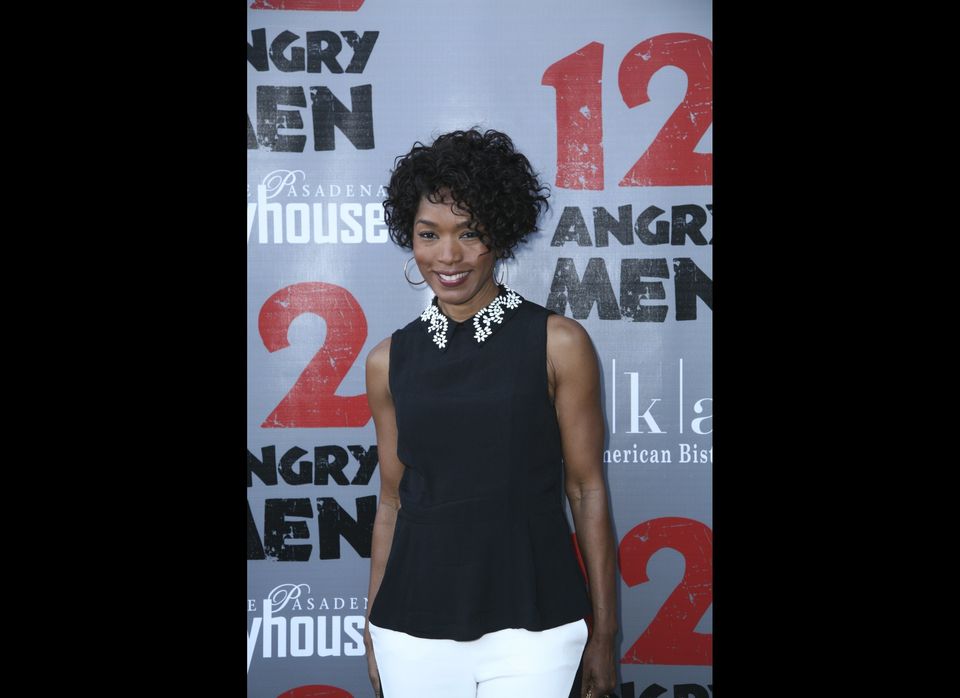