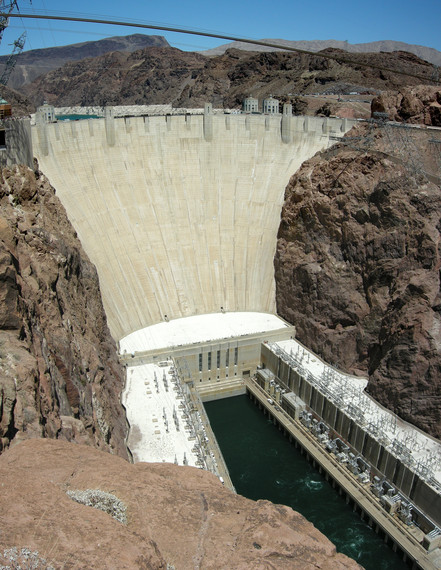 Dams illustrate the brilliance and arrogance of human ingenuity. They generate one sixth of the world's electricity and irrigate one seventh of our food crops. They have flooded land areas the size of California, displaced a population the size of Germany's, and turned freshwater into the ecosystem most threatened by species extinction. Below are 12 of the 57,000 large dams that have changed the face of our planet:

Hoover: the dam that gave us Las Vegas

The Hoover Dam was the world's highest and most powerful dam when it was completed in 1936. It spurred the agricultural and industrial development of the US Southwest, and destroyed the Colorado River's rich downstream fisheries. Climate change is greatly affecting the dam's capacity to supply water and generate power.

Kariba: the dam that ended poverty in Southern Africa (or did it?)

The Kariba Dam on the Zambezi was built in the 1950s to power Zambia's copper belt, as the first large dam funded by the World Bank. Kariba was considered the symbol of a "brave new world," in which controlling nature would bring quick economic development. Yet the 57,000 people who were displaced by the dam suffered famine and are still impoverished.

Bhakra: the temple of modern India

In the 1960s, the Bhakra Dam became the symbol of India's green revolution, and was hailed by Prime Minister Nehru as a "Temple of Modern India." Yet in India and beyond, badly managed irrigation schemes have resulted in waterlogged, saline soils and diminishing harvests. Nehru soon came to deplore the "disease of giganticism" in dam building.

Chixoy: the grave on the Rio Negro

Dam-affected communities have often suffered repression and human rights abuses. In 1982, more than 400 indigenous men, women and children were massacred to make way for the World Bank's Chixoy Dam in Guatemala. In a historic breakthrough, the country's government in 2014 signed a $154 million reparations agreement with the affected communities.

Banqiao: the dam that washed away

When dams are not properly built or maintained, they can break. In the world's biggest dam disaster, the failure of China's Banqiao Dam killed an estimated 171,000 people in 1975. In more than 100 cases, scientists have also linked dam building to earthquakes. Strong evidence suggests that China's Sichuan earthquake, which killed 80,000 people in 2008, may have been triggered by the Zipingpu Dam.

Yacyretá: the monument to corruption

Large dams are often pet projects of dictators. Lacking accountability leads to massive corruption and cost overruns. On average, large dams experience cost overruns of 96% and are not economic. The cost of Argentina's Yacyretá Dam has mushroomed from $2.5 to $15 billion dollars. A former president called Yacyretá "a monument to corruption."

Nagymaros: the dam that started people power in Eastern Europe

In 1988, 40,000 Hungarians protested against the proposed Nagymaros Dam on the Danube in the first open defiance of a communist government in decades. The following year, the project was stopped and people power took root throughout Eastern Europe. Protests against destructive dams also started democratic processes in Burma and other countries.

Sardar Sarovar: the dam that defeated the World Bank

The Sardar Sarovar Dam on India's Narmada River has displaced more than 250,000 mainly indigenous people. The World Bank had to withdraw from the project in 1994 after an independent review found systematic violations of its social and environmental policies. After this humiliating experience, the Bank stayed out of mega-dams for more than a decade.

China's Three Gorges Dam is the world's largest hydropower project and was completed in 2008. It generates as much power as eight large nuclear power plants, displaced more than 1.2 million people, and ravaged the ecosystem of the Yangtze River. The Chinese government has acknowledged the problems of the project, but continues to export its technology overseas.

In 2003, the Chinese government decided to fund the Merowe Dam in Sudan as its first big overseas hydropower project. The dam displaced more than 50,000 people and caused serious human rights violations. Chinese banks and companies are by now involved in some 330 dams in 74 countries, leading an unprecedented global dam building boom.

With the Inga 3 Project on the Congo River, the World Bank returned to building mega-dams in 2014. Even though the Bank has failed to complete much smaller projects on the Congo, Inga 3 is only the first phase of the world's biggest hydropower scheme. The project will have limited local impacts, but will bypass poor consumers and benefit mining companies instead.

Glines Canyon: the dam that came down

Dams have serious environmental impacts, and their benefits dwindle as they age. Since the 1930s, the United States has removed more than 1,150 dams to restore river ecosystems and particularly fish habitats. In 2014, the 64 meters high Glines Canyon Dam on the Elwha River in the Pacific Northwest was breached in the world's biggest dam removal so far.

Patagonia: the dams that were never built

In recent years, solar and wind energy have seen their commercial breakthrough. These renewable energy sources are cleaner than coal or hydropower and can be built were people need electricity, even far away from the electric grid. In 2014, Chile canceled five dams in the Patagonia region under strong public pressure and approved 700 megawatts of new solar and wind farms.

What you can do

Renewable energy rather than mega-dams and fossil fuels is the right choice for the 21st century. Even so, numerous destructive dams continue to be proposed and built on the Mekong, in the Amazon, throughout Africa, in China, the Himalayas and other parts of the world. Find out what you can do to stop destructive dams and protect the arteries of our planet!