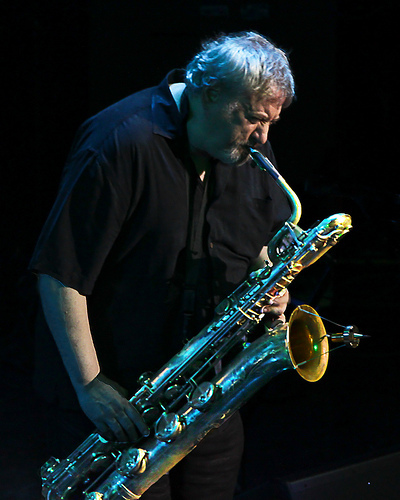 The cumbersome and often unwieldy baritone saxophone has long been relegated to the position of a shadowy stepchild to its more grandiloquent brothers, the tenor and alto saxophones, in jazz music. A low register behemoth that requires voluminous breath, careful control and formidable stamina, it has been used primarily in jazz orchestras to produce those low resonant notes that bring the bottom end to life in modern jazz orchestra arrangements. Prominently used in the great jazz orchestras of Duke Ellington and Count Basie, the baritone saxophone was played by the great Harry Carney in the Ellington band and by Jack Washington in the Basie band. Carney, with his incredible use of circular breathing and his pure uncluttered tone, is widely recognized as having been a pioneer on the instrument, bringing the baritone out of the obscurity of the saxophone section and into the limelight of a solo instrument.

Using Carney and to a lesser extent Washington as inspiration, baritone players started to experiment with the versatility of this instrument. In the forties and fifties Serge Chaloff pioneered the bebop sound on the big horn with his solo work and as one of the infamous "Four Brothers" saxophone section in Woody Herman's Second Herd. Saxophonist Leo Parker continued this path finding his niche playing a boppish blues inspired baritone and Cecil Payne was known for the warmth and heartiness of his sound which was partially inspired by his work with Dizzy Gillespie. The diametrically opposed styles of the cool school innovator Gerry Mulligan and the facile, hearty work of Pepper Adams brought the baritone front and center and undoubtedly inspired the next generation of players.

The instrument has gone through a dramatic metamorphosis in the hands of avant-garde players like Hamiett Blueitt, impressionistic players like John Surman and Colin Stenson, and free players like Ken Vandermark and Mats Gustafsson. The tradition has been expanded and enhanced by such great players as the incendiary Ronnie Cuber, Nick Brignola, Dennis DiBlasio, the superlative James Carter, Xavier Richardeau and modern master Gary Smulyan and the future looks bright with young stars like Alain Cuper, Brian Landrus, Claire Daly, Frank Basile, Lauren Sevian and Jason Marshall.

Since the instrument has been such an important part of the saxophone sections of so many great bands over the years, it is important not to forget the players who have made such an important contribution to this music on this instrument, while never seeing the spotlight of the solo. Many of their work is timelessly hidden in the seamless perfection of the band's signature sound, a sound of singular voicing. Some do double duty on baritone and other reed instruments. So let's' not forget the work of the previously mentioned Jack Washington who worked with Basie; Charlie Fowlkes, who played in the bands of Arnett Cobb, Lionel Hampton and Count Basie; Ernie Caceres, who at times played with Woody Herman, Tommy Dorsey and Benny Goodman; Laurdine "Pat" Patrick who played with John Coltrane, Thelonious Monk and spent forty years in Sun Ra's Arkestra; Haywood Henry who played with the Esrkine Hawkins band; Glen Wilson, who teaches and has toured with Buddy Rich and the Bob Belden Ensemble; Jack Nimitz, played with Woody Herman, Stan Kenton, Oliver Nelson and Herbie Mann; Danny Bank who played in the bands of Artie Shaw, Oliver Nelson and countless other bands and was heard on numerous studio sessions. Carl Maraghi played with "Doc" Severinsen's Band and works in Darcy James Argue's Secret Society band. Ed Xiques who has played in the Thad Jones/Mel Lewis Big Band and is now with the Westchester Jazz Orchestra and George Barrow, who played with Oliver Nelson's orchestra.

Other great multi-instrumentalists that double regularly on the baritone as part of their multi-reed work include the inimitable Scott Robinson with Maria Schneider's Orchestra, avant-garde multi-instrumentalist Vinnie Golia and the versatile Howard Johnson, whose principal instrument is Tuba.

A big thank you goes out to Andrew Hadro and his JazzBariSax.com which was a invaluable resource for this article and all things baritone saxophone.

Where it all started the master:

Serge Chaloff: from Blue Serge 1956 with LeRoy Vinegar (b), Sonny Clark (p), Philly Joe Jones (dr) "All the Things You Are"

James Carter: on the Real Quiet Storm 1995 with Craig Taborn(p): "Round Midnight"

Mats Gustafsson from Catapult 2005 "The Light"

Colin Stetson & Sarah Neufield : Never Were the Way She Was 2015 "Won't be a Thing to Become" 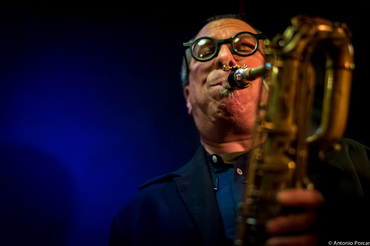