Twenty years ago today, thousands of Chinese students, workers, and citizens marched in peace in Tiananmen Square. They called for democratic reform, freedom of speech and assembly, and an end to corruption. The People's Liberation Army, the People's Army, was used against the people, crushing demonstrators in Tiananmen Square and crushing dissent throughout China -- killing thousands. Today, the spirit of Tiananmen lives on in those continuing the struggle both in China and around the world.

Last week, I led a bipartisan Congressional delegation to China. While China has made great economic progress in the last twenty years, it is a country that remains full of contradictions and complexities. While its leaders have astonishing political power, they continue to censor the internet, lock up citizens who organize peacefully, and try to prevent 1.3 billion people from learning the truth about history.

The topic of human rights was discussed in our high level meetings and in my speeches. In Shanghai, our first meeting was with Catholic Bishop Jin to discuss the status of religious freedom in China.

In Beijing, I delivered a letter calling on the Chinese government to release certain prisoners of conscience. One of those individuals is Liu Xiaobo. Liu spent five years in prison and in re-education-through-labor camps for supporting the Tiananmen students and questioning the one-party system. Late last year, Liu was again arrested for being one of the organizers of Charter '08, an online public petition for democracy and the rule of law that called for new policies to improve human rights and democracy in China. About 5,000 people signed it. Imagine the courage of those who signed such a petition. Liu continues to be held without charges, and is reportedly under residential surveillance at a location outside of his residence, in violation of China's Criminal Procedure law.

In Hong Kong, we met with democracy, human rights, and labor leaders. But what I saw in China last week is that despite continued repression, the spirit of Tiananmen continues to inspire people there and abroad. Throughout China, workers and farmers are fighting back. They might not know about June 4th, as the Chinese government continues to censor news on the news (Wired's Threat Level blog compiled sites authorities have blocked which include Twitter, Flickr, Hotmail, and the Huffington Post, among others), but they have similar concerns.

Two of the issues which have been priorities of my service in Congress -- promoting human rights and protecting the environment -- are coming together in the discussion about China. Environmental damage adversely impacts the poorest people in the world and this is especially true in China. It is estimated that there are more than 100,000 protests each year in China and the number continues to increase. 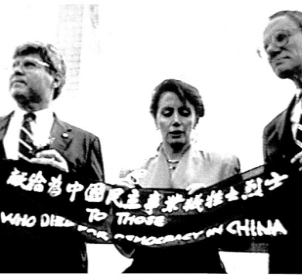 As a Member of Congress in 1991, I visited China and unfurled a banner in Tiananmen Square dedicated to those who died for democracy there. That was one of the proudest moments of my career. It was my opportunity to express the concern that I had for the human rights situation in China and Tibet. On last week's trip, as Speaker of the House, I had the opportunity to speak directly to the President of China and other top leaders on the issues of freedom and human rights.

On Tuesday, the House passed a resolution recognizing the 20th anniversary of the brutal suppression of protesters and citizens in and around Tiananmen Square -- expressing sympathy to the families of those killed, tortured, and imprisoned in connection with the protests, calling for the Chinese government to allow full and fair investigations and to release those imprisoned for participating in the 1989 demonstrations.

With this, the United States Congress says to the people of China and freedom-loving people everywhere: Your cause is our cause. We will never forget, and we will continue to push for freedom in China, so that one day the world's most populous country can finally be called the world's largest democracy.

Democratic Leader of the U.S. House of Representatives