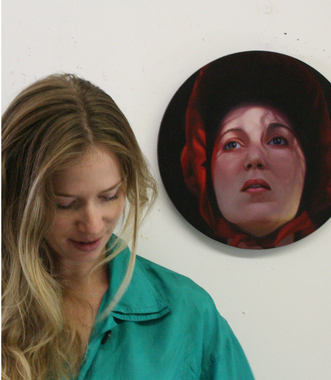 With only a quick glance at Laura Krifka's paintings, you could easily miss the deviance of her characters and the surprisingly naughty-to-sinister innuendos that she concocts. With art, historical allusions and adept technique, her work lures you in and then reveals its surprises, which further complicate what you think you're looking at. I had seen a few of her paintings in group shows around Los Angeles, including the most recent one, Rogue Wave '13 at LA Louver, during which Krifka gave an artist talk. Hearing her talk about her work sealed the deal for me to be totally impressed with her as a painter, artist and all-around engaging person to talk with, so I was very excited to have her all to myself during a recent visit to her studio.

Can you talk a little about what you're working on right now? What are you most excited about?

Right now I'm working on a painting called "Kiss Off." It's a female nude, upside-down, half submerged in water, with nothing showing but her open, gaping mouth and its reflection in the water. It will be shown at the BravinLee Program's booth at the Untitled Art Fair in Miami, December 4-8, 2013.

I'm curious about the specific male and female roles in your pieces. You play around with who is the victim, who is the object, who is the perpetrator. This new one is a good example of that -- it looks like a (probably) dead woman -- could you talk about how you think about gender roles, how you choose between male and female for your subjects and how you see that decision as being important in your work?

I think when you see a victim that's male, it feels different than a victim that's female. In some ways male violence seems... I don't know... more surprising than female violence. We're so used to seeing females victimized, opposed to male figures, because of the things that we fetishize in our culture. 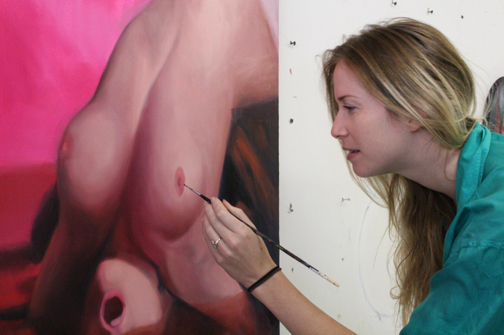 Why did I do this one female? One reason was that I just really liked the idea of the disorienting view of upside down giant breasts (and not like bolt-ons), like fleshy breasts sliding down a body. It feels it could be sexual, but could also be like decay -- the way that flesh starts to slide off the bone.

So for me there was an interesting correlation between sexual flesh, moving, and the scariness of your flesh decaying. I like the idea of how female sexuality is rooted in its transience, and its linked with death -- the breast will only be perky for so long -- and so it seems to me that those two things are really linked culturally: female sexuality and the fleetingness of it leading to our own death. And so for me the painting is about that -- the sort of inner turmoil of feeling my own mortality.... but that makes me sexy.... 'cuz I'm gonna die! [laughs]

You also have some pieces, for example I'm thinking of "Mine Eternal," where you have a man who is on display -- he's the object of our gaze. Are you thinking of that as a power-play reversal?

The painting "Mine Eternal" is based off of the mythological story the "Sleep of Endymion," which is a story about a moon goddess named Selene who falls in love with a shepherd. She thinks he is so beautiful so she asks Zeus to have him; she wants him to be hers. So Zeus puts him to sleep for a thousand years and he never ages, and she comes down as a moonbeam and sleeps with him every night and produces fifty daughters. 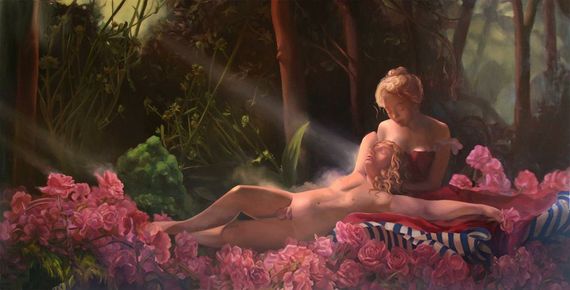 Basically it's a rape fantasy; it's this eternal rape that happens of this sleeping youth for a thousand years. So yeah, it's a role reversal. I guess one of the reasons why I love mythology, and I come back to a lot in my work, is because it seems like it's always rooted in things that we're all terrified of, but also interested in; it's just really rich territory to explore visually.

What is the most exciting part of the process for you -- what do you have the most fun with?

It's all fun. There are so many steps to me making the pieces and each step has its own particular pleasure. I love brainstorming -- that's really fun, where my brain's going a million miles a minute. Building the models is fun, because there's this moment where it's completely from my imagination. It's completely here in my head and then it's suddenly there and I can show it to somebody. 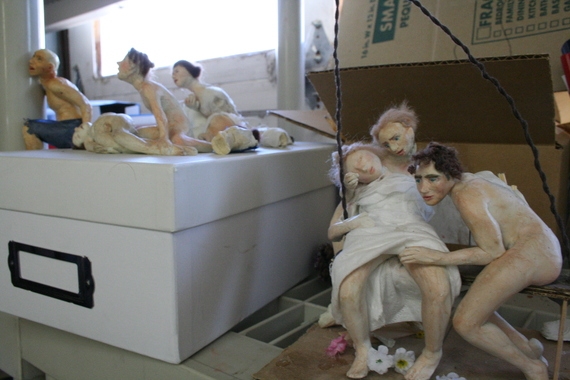 And when I start the painting -- painting is just so pleasurable. I love that there's something that I can do that involves craft still. It's so fun to engage in that craft. I know craft used to be a dirty word, but I think it's a really good word now.

Then what would you say is the most challenging or difficult part? Is there one?

Actually making the painting. Even though I love it, it's challenging and difficult. I have skill, but I am always doing something that I don't know how to do so I stay interested. But painting is really hard! It's an incredibly difficult thing to do, and having to be honest with yourself the whole time. Having guts to do things you don't know how to do, and to just go for it, and actually being honest with whether or not you like it. That's really hard.

You live in Ventura and teach in Santa Barbara, so you have some distance from L.A., even though you are represented by a gallery there and you exhibit there. I'm interested to know if you like being on the outskirts? Or if you feel disconnected to the nearby L.A. art community? I'm curious if it's difficult? If it's intentional?

It's intentional. I really like having an easy life so I can have a difficult studio. I can be challenged here. Other reasons -- I just really, really like nature. I like being able to see trees and see mountains and the ocean. I feel more connected to the things I actually care about. I love looking at art, I love talking about art, but my art isn't about art. And so I need to be surrounded by things that let me think about the things I actually care about. 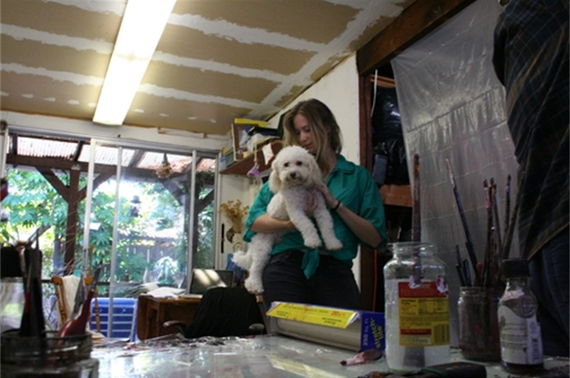 I love going to Los Angeles, and I love seeing things. I can go and get inspired, or furious... and then I can come home and put it in a box and pull it out when I want to think about it. I feel very autonomous here.

Laura Krifka is represented by CB1 Gallery in Los Angeles and BravinLee Programs in New York. Her work will be shown at the Untitled Fair in Miami at the BravinLee Programs booth on December 4-8, 2013 with a private preview on December 2, 2013 and can also be seen on her website. This interview was also published here.