So, you need to shut down your Foxified uncle?

Since it's not easy for faithful conservatives to answer questions about climate science, gun violence, mass deportation, and Obama's economy, among others, they often resort to several rhetorical tools to sway credulous audiences. This enables lazy commentators and defensive Republicans to dismiss serious criticism by asserting that "both sides do it."

The key to each ''twistification" is the projection of implacable confidence since most people want to continue to believe what they already believe. Hence the British axiom, "perhaps wrong but never in doubt."

1. Find a Black Swan. When data and common sense are to the contrary, just highlight one outlier and ignore voluminous contrary examples. Pretend that the aberrational is typical. To argue that the President really isn't smart, Fox's resident linguistic scholar, Sean Hannity, frequently cites when Obama once mispronounced "corpsmen" as corps-men, not cores-men. The GOP appears to have a lot of bigots? Remember when Sen. Robert Byrd was in the Klan in the 1930s! This method could "prove" that Ted Williams was an awful hitter by showing you video of his only three-strikeout game in a .341 lifetime career.

2. Lie, brazenly. All candidates engage in largely harmless and discounted puffery. But then there are repeated untruths that corrupt debate. It's Cruz asserting that a) Obamacare is a job-killer though unemployment has fallen every month since enactment. It's Donald Trump claiming that "82%" of white victims were killed by African Americans (it's in the teens) all while he invariably adds phrases that seduce willing Trumpkins: "frankly... in all candor... believe me... ok?... right?" Trump's niagara of falsehoods - 70 percent of all he says, according to Politifact -- reveals a new post-truth world that earnest fact-checkers apparently cannot dam up.

To order or learn more about Green's book, go to BrightInfiniteFuture.net. 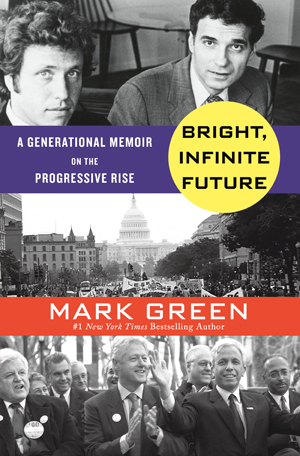 3. Hyperbole. Mark Twain called them "stretchers" -- when there's a germ of truth in a comparison that's far more dissimilar than comparable. Hence all those times critics on Fox News simply label any controversy as "Obama's Katrina, Obama's Watergate, Obama's Munich." Or the claim that Obama's doing "nothing" in the war on terror, which could be true if you ignore all our troops, missiles, intelligence sharing and ISIS/Taliban leaders dead from drones. Or better yet, just use a loaded adjective and let it poison the well -- the best early example being Newt Gingrich's 1996 memo urging GOP candidates to always use words like "traitor, pathetic, corrupt" to describe Democrats and the best current one being Trump's "crooked Hillary" (if you're wondering why Sanders's and Kasich's unfavorable numbers are lower than hers).

4. Deny, Deny, Deny. In the play Chicago, a wife walks in on her husband in flagrante as he keeps calmly saying "what woman?" until the liaison hurriedly dresses and leaves . . . and the wife starts to question her memory. In real life, it's Jeb Bush insisting that his brother "kept us safe" because W spoke patriotically into a bullhorn while standing on the rubble of 9/11. So no matter how obviously Voter ID state laws suppress millions of eligible minority voters and U.S. deficits don't turn us into Greece, just assume that the Japanese axiom is correct: "after six months, no one remembers."

5. Politically Correct! What if your opinion is unpopular because it's both false and stupid -- like Mexicans are rapists, the climate is cool? Why bother admitting error when you can ignore evidence by decrying censorship? Then you to never have to respond to the core question. Here the world champion was Ben Carson: You don't agree that Jews with guns could have deterred the Holocaust? You're just being politically correct! Thank you Marco Rubio for saying in your final debate that you "didn't want to be politically correct, only correct."

6. Reverse Language and Speak Quickly. Lincoln said audiences should be careful with slick talkers who confuse "a horse chestnut and a chestnut horse." Today that kind of word play is skillfully deployed by conservatives who ignore "racism" but harp on "reverse racism". Or if you have an anti-feminist organization, call it the Susan B. Anthony group. If you can't convert 'em, confuse 'em.

7. Ergo Hoc Propter Hoc. There's a joke about an old man sweeping leaves in DuPont Circle to keep away the elephants. "But there are no elephants here," comes the reply. "See!" If there's little evidence to support some prejudice, a surefire way to convince reactionary listeners is just to list problems and then say a version of "on Obama's watch!" If inequality, undocumented immigrants, and an exploding Middle East precede the forty-fourth president, ignore those realities and blame him. Assume most Obama-loathing conservatives lack any sense of consequence.

8. Fear Itself. Our evolution includes a brain clump called the amygdala so we get ready to flee or fight when endangered. This primitive impulse was essential to cavemen and is to modern cavemen like Cruz who brilliantly confuse the patriotic with the hyperbolic and apocalyptic ("the world's on fire!"). He theatrically asserts that an Iran nuclear deal that slows or stops a nuclear Iran -- agreed to by nearly all the nations on earth -- actually guarantees that Iran will somehow build and use nuclear weapons against Israel and America. This tactic works best not merely when it instills fear, according the New Yorker's David Remnick, but "perpetual fear." (See whatever this year's 'October Surprise' will be.)

9. Next Faux Scandal. "It's always something," said Gilda Radner's character Roseanne Roseanadanna. Should some controversy be resolved against your team -- say, Michelle in fact did not spend $200 million traveling to the South Pacific -- just quickly move on to some new allegation to feed the conservative perpetual grievance machine. If it's late year, the "War on Christmas" -- when America's 7 percent nonbelievers supposedly bully the 70 percent Christian population -- will do nicely. Or if you have no obvious policy difference with Obama on, say, how to deal with Syria and ISIS, then attack his refusal to use the words "Islamic terrorism" since if he did that would obviously reduce it.

10. Change the subject with a rhetorical question. Here's a nearly infallible misdirection: if you're cornered on having to defend something insane - such as calling for a Gestapo-like registry of deportable Muslims or for maintaining Citizens United so billionaires and corporations can buy elections as the Founders intended -- have this arrow in your quiver: "What about how Obama's IRS was governed by an enemy's list? What about Mayor Richard Daley throwing the election to Kennedy with graveyard votes in 1960?" Because recency, relevance and proportionality are not required, the opportunities are endless.

Short of an algorithm that can flag a falsehood in a kyron while a candidate is speaking on TV, it's now almost impossible to pin down quick-witted GOP contenders deploying these and other Twistifications. But before throwing up your hands, eventually there will be a General Election when a Democratic nominee will have a pulpit and ad buy to expose "truthiness" and a media presumably unwilling to again give, say, Donald Trump 20x more air time than his rivals (see cable news). Eventually, the best way to expose such trickery is Benjamin Franklin's observation that "when truth and error have fair play, the former is always an overmatch for the latter."