Twitter is apparently testing some big changes to the site. Certain users have noticed convenient new features that expand the timeline on Twitter.com, though this test appears to be limited to only a few users.

One of the new features, as described by Patrick Bisch of Pinglio, is an "Open" button, that you can click to expand a particular tweet to display replies, making the tweet exchange appear more like a threaded conversation.

As reported by CNET, Bisch has created a video showcasing some of the new features he and other users have discovered.

The last major Twitter update was announced in 2010, when the design we know today was launched. The major change at the time was a dynamic makeover to the formerly stagnant right hand column. The main tweet stream was still displayed on the left, but the right hand column became the place where embedded photos and videos, as well as user profiles, could be viewed. As one user tweeted, "#NewTwitter is like a @twitter mullet - work on the left and party on the right."

New Twitter got a mostly positive reception. Users said it improved conversation tracking and was "awesome."

Even so, Twitter kept the old version around for almost a year, allowing users to switch back and forth between new and old. It wasn't until August 2011 that the site made New Twitter permanent.

The new features that Twitter is currently testing appear to have been rolled out to random users. As of this writing, there is no official word when or if they will be widely released. But some, like Erick Schonfeld over at TechCrunch, are already optimistic about what could be Twitter's next set of upgrades. "The changes are subtle, but they manage to simplify an already simple service," writes Schonfeld.

Take a look at the slideshow (below) to see a few of the new features that could be coming to Twitter. Then, visit Pinglio to explore more details about the test and to watch the full video walk-through. 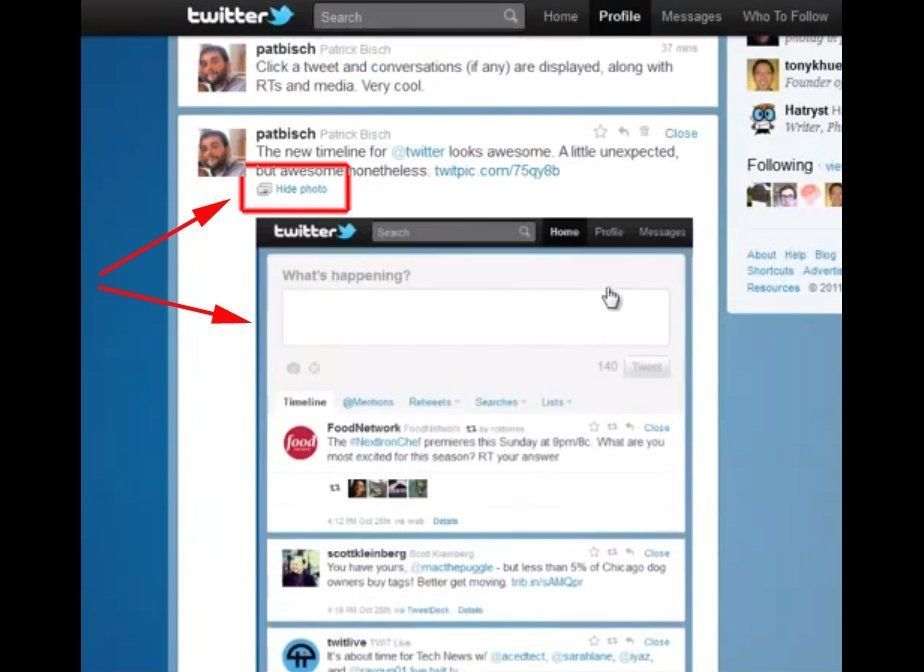 1 / 4
An option below the tweet lets you expand it to show photos or media attachments right in the timeline, rather than displaying them in the right-hand column