Spamming your Twitter followers with links to diet sites, specious videos, or links to "pics"? You're not alone.

From the slew of sketchy Direct Messages we've received from our followers and the numerous apologies popping up in our Twitter timeline, it seems that a large number of Twitter users have been compromised by spammers who are hijacking their accounts to share links to malicious sites.

First, change your password by selecting "Settings" from the dropdown menu next to your account name, which is listed on the top right on Twitter.com, then navigating to the "Password" tab. 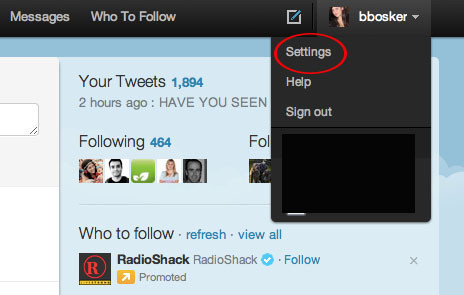 After this, Twitter advises users to delete any tweets or Direct Messages that may have been sent while their account was compromised (Sending an apology to your followers and/or a warning not to click on any dangerous links you may have tweeted out is optional).

There are also numerous precautions that you can take to ensure your account isn't hacked in the first place, something that often occurs because an untrustworthy third-party has managed to obtain your login information. Check out Twitter's Safety Center for a guide to "safe tweeting," and follow the official @Safety account for updates.

Generally speaking, if someone you follow sends a tweet that seems highly out of character (i.e. "Someone is posting a pic of you all over twitter ;( link2pic here" isn't what I'd expect from my friend Julie), you should be wary of clicking on the link that's included.

Malicious third parties often attempt to trick users by using shortened links that disguise the nature of the site they're directing people to.

In an effort to crack down on this, Twitter recently introduced its own URL shortener on Twitter.com that preserves the first few characters of a domain so that people can have a sense of what site they're being sent to before they click a link. For example, a link shortened via Twitter.com would read "bbc.co.uk/news/technolog…" instead of "http://goo.gl/oTzoc" or "http://bbc.in/q8U5GH."

Users should also be choosy when it comes to entering their passwords on third-party sites and apps. Always check the URL of the site before you enter your login information--phishing sites often attempt to trick people into giving up personal information by replicating the color, theme and layout of legitimate websites (see Twittter.com, for example--but beware what you share).