Get ready to see more ads on Twitter--if you follow certain accounts.

Twitter announced Thursday that it will be adding "Promoted Tweets," or advertiser-sponsored Twitter posts, to users' timelines. However, these ads will only appear to a user if she is following a brand that is participating in this advertising program.

In other words, if you don't want to see any ads, then don't follow Twitter accounts belonging to brands or companies that are advertising via Twitter's Promoted Tweets program, which include Groupon, LivingSocial, Microsoft Xbox, Starbucks, Virgin America, HBO, Dell, Gatorade, and Best Western, among others, according to Twitter.

Could Twitter's new ad plan end up punishing the marketers that choose to advertise with Twitter's "Promoted Tweets," by causing them to lose followers who aren't into seeing ads in their Twitter feed? It remains to be seen.

Twitter pitched the new in-stream ads as "a way to ensure that the most important Tweets from the organizations you follow reach you directly," though an advertisement is, at the end of the day, still an advertisement, and some Twitter users have not been especially open to the idea of seeing more ads on the social media site.

A Twitter spokesperson confirmed that the Promoted Tweets will, for the time being, be visible only on Twittter.com, and not on third-party Twitter clients or even Twitter's official apps.

"We are rolling this out via Twitter.com at first," the spokesperson said in an email.

See a screenshot, via Twitter, of how the Promoted Tweets will appear: 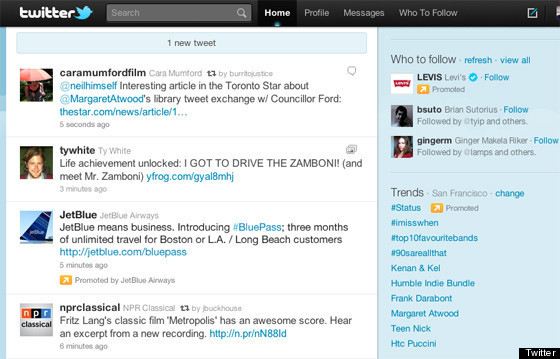