As someone who has spent the better part of the last year holding the collective feet of non-profits in Haiti to the fire, it is important that this story be told.

As the cholera epidemic was increasing exponentially last week, social networking, including Twitter, Facebook, and a number of Google Groups were posting eyewitness accounts of conditions at hospitals and in the countryside. The Artibonite Department (region) was the focus of many of these reports. Since mid-October when cholera was first confirmed in Artibonite, over 1,000 people have died and over 16,000 people have been hospitalized in Haiti.

An alarming report circulated on Twitter that babies were dying and that hospitals were at maximum capacity. This is certainly true in many parts of Haiti, and we witnessed it, but this particular "tweet" erroneously pinpointed the area in question as the island of LaGonave. It spread virally, and I quoted the 140 characters description in a post on Haiti's broken health care delivery system.

The Pan American Health Organization (PAHO) website at that time indicated cholera on LaGonave, so there was no reason to doubt the tweet.

Unfortunately, the disturbing description was correct for the mainland, but the "tweet" confused the island of LaGonave with the mainland city of Gonaives, the capitol of Artibonite Department. Residents of LaGonave were immediately suspicious that this represented an attempt on the part of the NGO, WorldShare, to obtain funding for a non-existent crisis. But this was not the case.

I immediately and rightly got an earful about those 140 characters from Haitians who thought the NGO was using them. Many phone calls and emails later to several NGOS, as well as WorldShare, and quite a bit of detective work on everyone's part, has resulted in an official statement from WorldShare, apologizing for the Twitter message.

But, was an apology from WorldShare for a geographical mix-up of locations that differed in spelling by one vowel necessary?

This required courage and complete transparency on the part of WorldShare, and they should be commended for this bold move. This honest mistake and misinterpretation was not their fault and certainly was not the result of some sinister motive on their part.

In retrospect, the inadvertent mix-up in the Twitter account of the geographical locations LaGonave and Gonaive is completely understandable. The fact that it caused such a flurry in Haiti and enraged an epidemiological NGO competing for the same slice of the funding pie--is unfortunate and speaks to a deeper disconnect and lack of trust.

We are working with photojournalist Leah Millis who is still in Haiti and providing us with photos of conditions there. Here is the face of Cholera in Artibonite. Cholera will not be imprisoned in any one location and will escape any feeble efforts to contain and track it until something is done about the health care and sanitation delivery systems in Haiti. 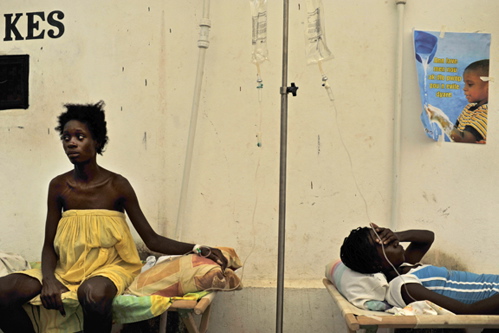 SAINT-MARC, HAITI-- OCTOBER 25, 2010--Vanesa Saint-Charles, 20, from Boudette Gran Plos, left, sits on a cot and receives fluids through an I.V. next to Eliciene Francois, 32, from Jamacou in a make-shift ward in the courtyard at St. Nicholas Hospital in Saint-Marc, Haiti. 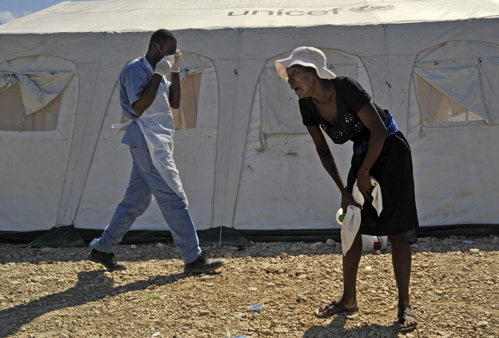 MIREBALAIS, HAITI-- NOVEMBER 16, 2010--Jeannine Succes mourns the loss of her 13-year-old son, Pierre Christopher, outside of the Intensive Care Unit tent at the hospital Sant Dyagnostik Entegral Migabalé in Mirebalais, Haiti. Pierre passed away approximately forty minutes before this photograph was taken. Succes wailed that he was getting ready for school only four hours earlier as she grieved his death.

The resulting attack on WorldShare by an epidemiological NGO was not constructive, wasted valuable time, and only served to fuel the already deep distrust Many Haitians have about NGOs in Haiti. A lot of that distrust is warranted, and some is not.

Whether one agrees with medical NGOs and their missions, or not, at least in this crisis it seems important that everyone pull together and work for the good of Haiti. Some cynics will not believe the WorldShare apology. This cynic believes them, completely, especially since they did not have to risk so much capital by doing so.

Here is the complete text of the statement from John Rose, CEO of WorldShare. A portion follows here.

We now accept completely that our original statement was wrong. It seems that our contact was writing to us about circumstances in certain parts of the mainland of Haiti - NOT on La Gonave - where circumstances similar to those described have in fact been widely described by others. There was no indication of this in their original message and, because of the nature of their communication with us in the past, we made an assumption that was understandable in the context, but in fact was wrong. We apologise to anyone who might have been inconvenienced by this error on our part. WorldShare is committed entirely to providing credible information to our supporters and others. On this occasion circumstances pressed us into going public before we had complete and corroborated information. Apologies again.