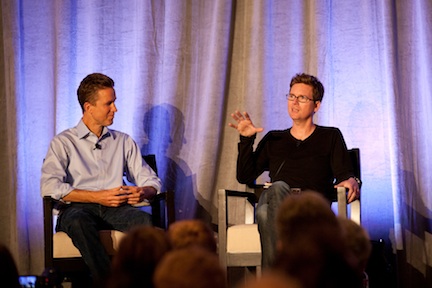 Excerpts from an Interview with Biz Stone at Wisdom 2.0 Business

(You can watch the entire interview here.)

Biz: I think about our approach to work almost as much as I think about the work and I think about culture. Positive culture comes from being mindful, and respecting your coworkers, and being empathetic.

You really have to work on a culture like you would work on a relationship. You have to invest time, energy, and resources into it. And that's a hard sell, especially if you're at a fast-paced start up and you're prioritizing different things.

I'm convinced that there's a new way to define capitalism, and that the definition should include three ingredients -- that we love our work, that we are building a traditionally successful business and that we are having some positive impact in the world, whether it's local or global. And a lot of companies have two of those things, or one of those things. But I think the new definition, and the new bar for success in capitalism, should be all three.

I have this theory that the future of marketing is philanthropy, because when you link a cause to your brand, your brand becomes more meaningful. And people are attracted to meaning, so they'll buy your product over another (AND employees are attracted to your company).

One of the big things that people just don't do is pay attention. "Pay attention" is good for all things, but in regards to this: pay attention to what other people are doing at your work, so that you can notice when they've done something good, and you can tell them that. Highlight those things that they did that you noticed that were good. That's a kind of mindfulness that says, "Hey, I appreciate what you've been doing, and I hope you understand that I'm paying attention to that." And then they think to themselves, "Well, what I can do to be nice to somebody else?" and it just has this ripple effect.

The thing that excites me, and the thing that excited me about Twitter, is the idea of a flock of birds moving around an object in flight. It's something that looks incredibly beautiful and it also looks incredibly complicated and choreographed, but it's not; it's rudimentary communication among individuals in real time that allow the many to behave almost as if they're one organism. They come together for a flash and they're one organism; and then they're back to individuals.

If humanity can come together and move as one, then the things we can do and achieve are amazing in a short amount of time. If we can swoop together as one and work on one project and just get it done; the more we can have that flocking mentality for good, the better.

Join us for our next Wisdom 2.0 conference February 21st - 24th in San Francisco