This week, Twitterers around the world received some devastating news: The Twitter account @Horse_ebooks, a cult favorite, was human after all.

For years, @Horse_ebook’s over 200,000 avid followers had been convinced its sometimes poetic, often nonsensical, frequently hilarious tweets had been the musings of a spambot created to elude Twitter’s spam detectors and peddle books about horses. There was something captivating about an algorithm that seemed so gifted at capturing the conundrums of our age. (“Everything happens so much” read one post, retweeted 8,500 times.)

On Tuesday, that fantasy came crashing down. The New Yorker’s Susan Orlean revealed that two living, breathing homo sapiens had been composing the tweets as an art piece.

The disappointment that followed this crushing news stemmed in part from an indignation at having been fooled, and in part from the letdown at learning such witticisms had stemmed from people. We were rooting for the robot. We loved the idea that something we thought was meant to be a nuisance -- to sell us things -- could be so charming. Here, finally, was an algorithm that wasn’t just efficient, but actually was weirdly insightful.

Our dismay at finding that the bot was human actually reveals a great deal about we want from our devices: We're rooting for the compassionate computer.

"If people are upset that [@Horse_ebooks] is a person, it's because they were hoping for the future. They were hoping that in the future, computers would be not just responsive or smart, but poetic," says Blade Kotelly, a lecturer at the Massachusetts Institute of Technology and an expert in user-interface design. "[The computers] wouldn't just be executing. They'd be thoughtful, taking care of us."

The conventional view of technology pits humans and electronics as antagonists, with robots and software always angling to replace or destroy us. To a large extent, we assume we should fear computers that become more capable. They’ll take our jobs, wed our lovers and overthrow us.

But the reaction to @Horse_ebooks' ousting highlights a different side to our relationship with technology: It shows just how much many of us like talking to machines.

Though @Horse_ebooks was fake, machines don't need a human puppeteer to be charming. History is full of bots that have charisma and appeal to us as more than mere tools. (Of course, it goes without saying that there are plenty of maddening ones too. Just call any automated helpline.)

In 1966, the Eliza chatbot, which imitated a psychotherapist in its text-based conversation, proved so enthralling to its human users that it alarmed its creator. Computer scientist Joseph Weizenbaum's subsequent writings warned of the ills that might follow from our overreliance on technology. In the early 2000s, the AOL Instant Messenger bot SmarterChild amassed 30 million “buddies” and fielded over a billion IMs a month -- despite the fact it was little more than a Magic 8 ball that could type. More recently, Siri has charmed us with its snappy answers, elementary chatbots have been used to generate scripts for films, and boxy robots have proven capable interviewers on camera.

Just last week, artificial intelligence experts convened in Ireland for the Loebner Prize, a competition to see who could create the most human-like chat bot. A group of teenagers who helped judge the competition said they could tell easily which chatting partner was a person and which was a machine. But who was most fun to talk to? Definitely the chatbot, they agreed, according to one of the contest’s attendees. The bot that won, Mitsuku, had been built to draw visitors to a music website -- only its creator found that people preferred speaking with the bot to listening to the tunes.

So what’s so entertaining about bots with personality? Why do we willingly engage in conversations with computers, even though we know they’re nothing but code? And what makes their accidental wit so charming?

In part, it’s the sheer novelty of it. Clever humans have been around for millennia. Humorous computers, on the other hand, are still the stuff of science fiction. Even in their simple forms, conversations with witty algorithms can feel like the future, a kind of teaser of robo-companions to come.

After all, we’ve spent centuries dreaming of machines that can equal our capabilities. And for centuries, we’ve been duped by humans mimicking machines. The fascination with @Horse_ebooks, and subsequent disenchantment, closely resembles another mechanical illusion that captivated the world in the late 18th century. In 1770, the Hungarian inventor Wolfgang von Kempelen created what he claimed was a robotic chess-playing machine, the "Turk," that delighted Hungarian royalty and traveled around the world taking on opponents, such as Napoleon Bonaparte and Benjamin Franklin, This “mechanical” Turk, it turned out, was a hoax. Like @Horse_ebooks, a human had been manning it all along. 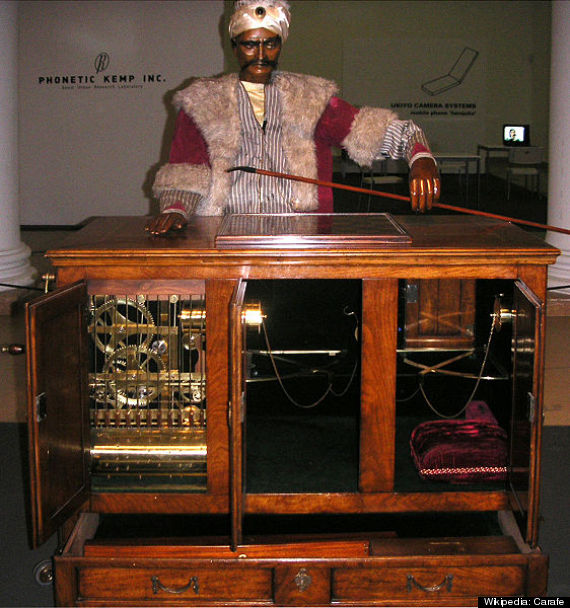 A recreation of Kempelen's Turk. Photo via Wikipedia user Carafe.

And like @Horse_ebooks, the 18th century automaton let us explore the possibilities of technology and help us acclimate to what the future might bring.

“Then, as now, many people were ambivalent about the new machines. On one hand, they were fascinated […] but they were also concerned that humans might end up being superseded,” author Tom Standage writes in an adaptation of “The Turk: The Life and Times of the Famous Eighteenth-Century Chess-Playing Machine,” published in Wired. “In the end, the Turk was taken seriously because it provided a starting point for discussion of the promise -- and limits -- of machinery.”

But our current bots do more than tease the future. What has attracted us to them is also the version of the future they present. In many cases, they offer a more optimistic view of what’s to come. They hint that the next generation of technology could be at once functional, emotional and philosophical: Algorithms might not be cold, unfeeling bots -- but funny companions that are agreeable to be around. Because we’re drawn to these bots, it seems this is also what we want. Technology that’s a bit heart, and a bit code.

People who take pleasure in chatbots, or agents like Siri, are “looking for something you don’t expect from a computer,” says Richard Wallace, chief science officer of PandoraBots, a site that hosts and creates chatbots. “You think of a computer as something that will give you accurate, truthful, emotionless information. They’re looking to test it out and see … if these apps can give the impression of having feelings or being alive somehow.”

We’re hoping our bots will cut loose. They need to live a little -- but not be alive.