New Scientist's One Per Cent blog recently presented findings from Marc Smith of the Social Media Research Foundation comparing the social networks, derived from Twitter connections, for Occupy Wall Street and the Tea Party. Smith's findings suggest that communication about the Tea Party is insular and driven by a tightly knit group while discussion of OWS is more chaotic and absent of leadership. I'd like to examine these ideas through the broader lens of online media and expand the set of sample data from a single day to content published over several months.

To do so, I'll use the Recorded Future index examine the entities (people, places, companies, etc) mentioned in conjunction with the Tea Party from June 2010 through the end of October of 2010, directly in the lead up to the 2010 mid-term elections, and then compare to online coverage for the first few months of Occupy Wall Street's existence. The results show that the two movements are represented online in dramatically different ways [click on graphs to jump to enlarged versions]. 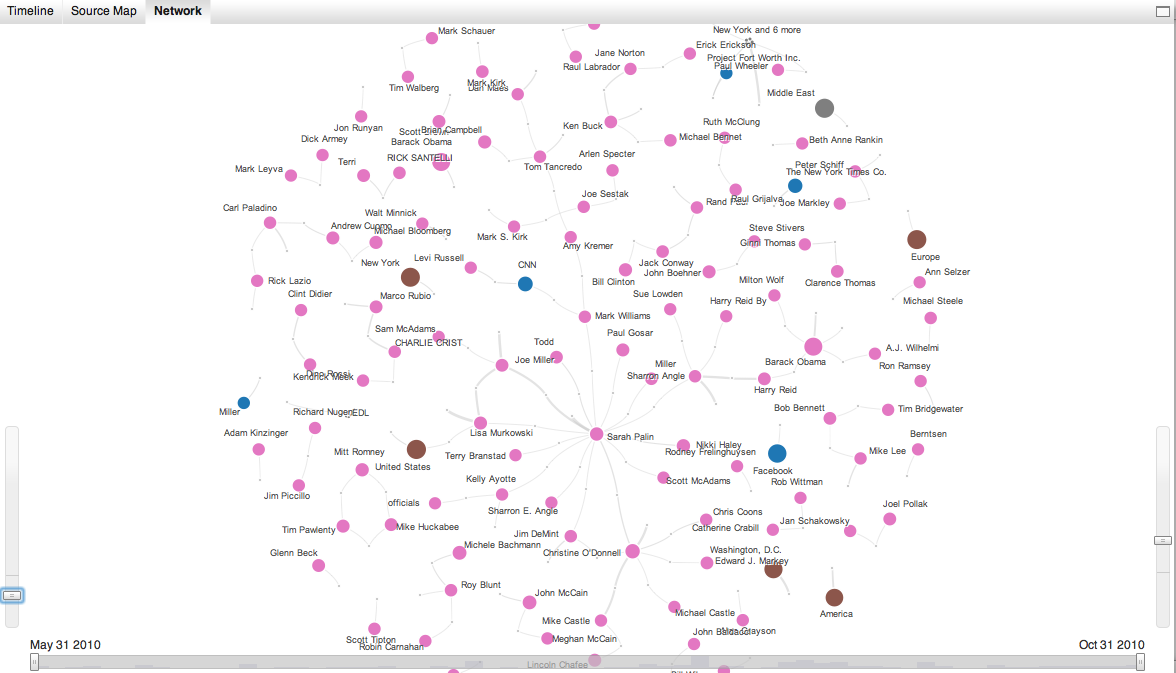 Before making any judgments on what's being shown, let's get to the comparative visual for Occupy Wall Street derived from content published between July 2011, when Adbusters initially called for action, through the end of November 2011: 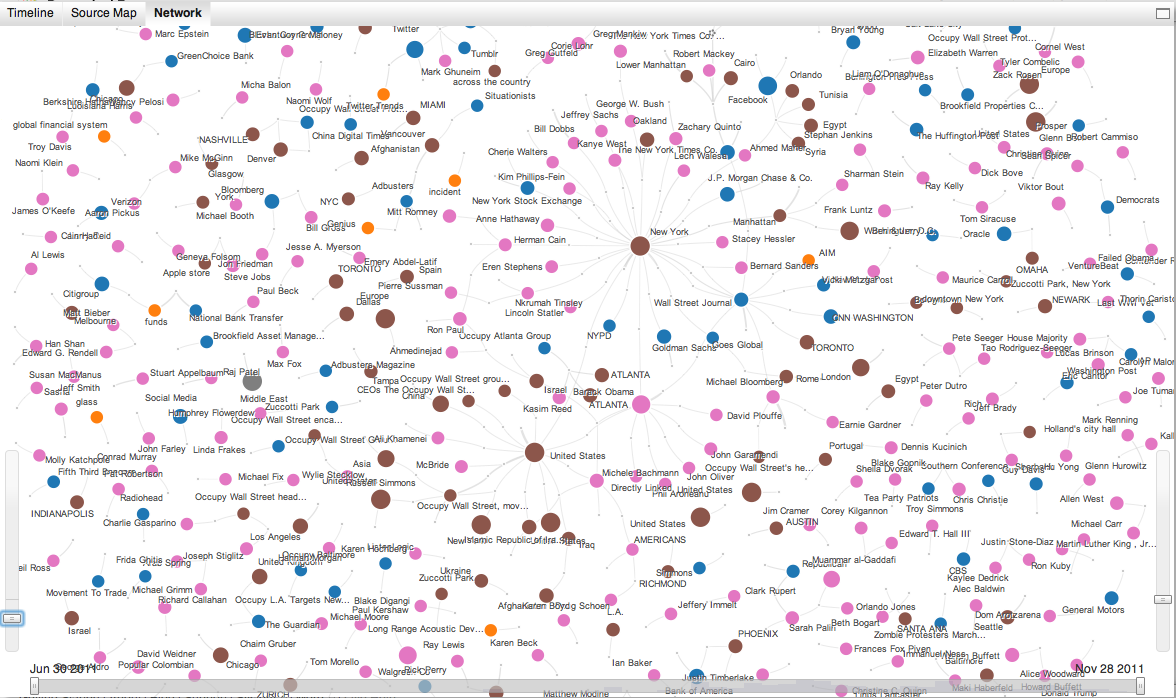 Now, some of the points that stand out:
Another angle to view, provided by the multitude of sources that Recorded Future analyzes, is what bias might exist outside of the agnosticism of Twitter. You might think that coverage of the Tea Party and OWS is coming from some particularly agenda-oriented sources. Well, there are actually some surprising results, including similarities, when analyzing the sources most prominent on each movement.

You might remember, for example, that early on in the OWS movement it was found that the Iranian media was a leading source in terms of total coverage related to the protests.

In gathering the further data for this piece, I've actually made an adjustment so that the following examples chart the sources that report most on statements made about each movement. So, mentions of the Tea Party or Occupy Wall Street that can be attributed to a particular individual.

Sources including of quotations about the Tea Party:

And then a map of sources including quotations about OWS:

A few takeaways from the above source maps:
Advertisement
Conclusions

What's to make of all this? Well, regarding the distributed network for OWS versus the politicized network for the Tea Party, it likely boils down to "Occupy" being seen as extremely risky to embrace politically while the Tea Party, certainly a civil movement, has been leveraged politically since its beginnings. The network also shows the online media has yet to succeed in identifying leadership, at least at the highest level. Adbusters co-founder Kalle Lasn, who created the initial call to action for Occupy Wall Street, figures quietly in influence over the broader discussion of OWS.

There's no doubt that the period of time sampled can affect the findings in an experiment such as this one. Smith used data from November 15, when OWS was being evicted from Zuccotti Park in a highly emotional event that drove media momentum while the Tea Party was experiencing what should be considered a pretty typical day when you look at its momentum for November.

Lastly, it's also interesting to consider the contrasting nature of each movement during the periods measured. OWS has been volatile with events emerging suddenly in distributed locations with sometimes very different individuals playing a part. The Tea Party appears the opposite with a steady, driving message leading up to the 2010 elections. The latter scenario requires individuals, as seen with the focal points in the Tea Party network above, to continue forging the movement's message its followers and the media; the former only needs an occasional event that emotionally affects the masses.