Vala Afshar is searching for the right candidate to fill a six-figure position at his company, but he won't be viewing a single resume. Instead, the chief marketing officer for Enterasys Networks will be evaluating job seekers based on their tweets, USA Today is reporting.

"The paper résumé is dead," Afshar told the news outlet. "The Web is your résumé. Social networks are your mass references."

Granted, the position Afshar is looking to fill -- that of senior social media strategist -- requires a person to be more than a little familiar with Twitter. But he's not the only one taking to the idea of screening people for how they handle themselves in 140 characters or less.

Time reported in 2012 that a recent Jobvite survey of over 1,000 companies showed that 92 percent of employers said they will use or already use social networks as a means of recruiting.

Despite Jobvite's findings, it seems the practice of using social media as a recruitment tool has yet to completely overtake traditional hiring methods: A Twitter spokesperson told USA Today she hadn't yet heard of hiring solely based on tweets. Nevertheless, a strong presence online can prove an effective way for candidates to get noticed by companies, as hiring practices move away from sifting through emailed resumes and postings on job boards.

Time also reported that, in addition to advertising job openings within social networks, some recruiters go a step further by seeking out shared connections on those networks and even messaging potential candidates directly.

Elysa Rice, community manager at advertising agency Red Urban, explained in a 2011 post for CBS News that she landed a job after tweeting during a panel at the South By Southwest conference:

"I got a message via LinkedIn asking if I'd be interested in interviewing for an open Community Manager position," Rice wrote. "After agreeing to the interview, I found out that he discovered me via that one session's Twitter conversation, and then spent a few days seeing how my online engagement skills related to the job he was hiring for. So essentially, I was being 'interviewed' before I even knew about the position."

Because the ways in which companies are finding candidates is changing, Barbara Safani, the owner of a career-management firm, told the New York Times last month that job seekers are best off making sure their names are search magnets online.

To get noticed, Safani suggested candidates maintain blogs, keep active LinkedIn profiles and post evidence of their professional skills, such as a YouTube video of an impressive speech for work.

Of course, job hunters also need to be careful about what kind of information they make readily available and searchable online. As effective as social media can be for landing a job, it can also ruin your chances just as easily.

As Forbes reported last spring, one in five technology industry executives admitted that a candidate’s social media profile was the reason the candidate wasn't hired.

Twitter Resume: How Your Social Media Profiles Could Land (Or Cost) You Your Next Job
Ridiculous Resumes & Cover Letters 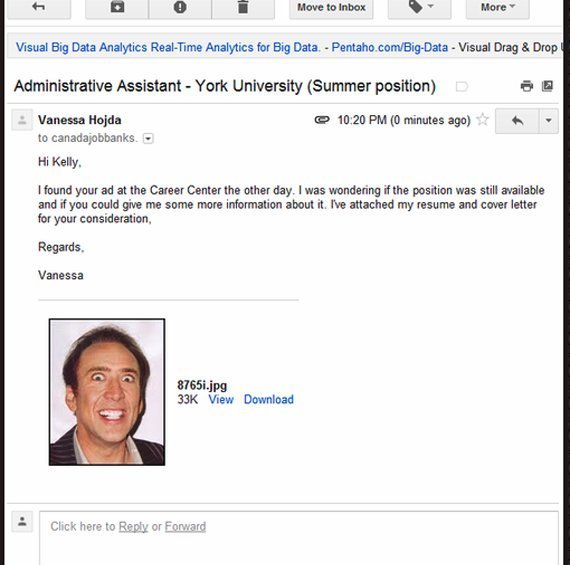 1 / 21
Nic Cage Resume
Even a diehard Nicolas Cage fan would be startled by that photo.
<a href="http://www.uproxx.com/webculture/2012/07/girl-accidentally-emails-prospective-employer-pic-of-nic-cage-is-awesome/">Uproxx</a>