I clicked on the link on my desktop browser. Nothing happened. I refreshed the browser. Nothing happened still. I looked up what Meerkat was and found out it was an app made by Life On Air, which was previously Yevvo. Giving up on the browser version I downloaded the app on my phone to satisfy my curiosity. There was only 2 people I follow on Twitter already on Meerkat. Then I clicked the link Matt Mazzeo had tweeted again, this time on my phones mobile Twitter app. It opened the link in the Meerkat app.

What I then saw was a casual conversation being had between Matt Mazzeo and his audience for office hours. He was responding to text chat questions from those viewing and really just giving helpful advice to everyone watching on Meerkat. It is important to note that while using Meerkat all the internal chats are actually also live tweets mentioning the broadcaster on Twitter simultaneously. There was only about 40 people in the room during the broadcast. One of them was Gary Vaynerchuk @garyvee.

The most interesting thing about this experience was that in real time and at a moments notice I went from sitting at my desk working, to seeing into someone else's window across the country. There was no FaceTime or Skype dialing. No recording the video now and others will view it at a later time. There was an instant public connection to the world and all of ones Twitter followers. Using Meerkat this first time felt like I was seeing something I shouldn't normally be seeing. This felt new!

After this stream ended then Ryan Hoover @rrhoover of Product Hunt got about 300 people on his live broadcast while he demonstrated new Product Hunt features. A few more hours went by. During that time notifications kept flashing on my phone as more and more people in my social network kept joining Meerkat.

One of the more interesting notifications I got was in the evening when Adam Lisagor @lonelysandwich went live from his living room saying "What is this thing? I think there might be a possibility I am streaming right now". I myself did this by accident too when I was first playing with the app. It's just that frictionless to go live to your Twitter followers.

When I woke up the next morning I got a Meerkat push notification again. This time telling me that @garyvee was live from New York, 1 minute ago. I clicked it and within seconds was inside Gary Vaynerchuk office, behind the scenes before the live recording of his "Ask Gary Vee" show. 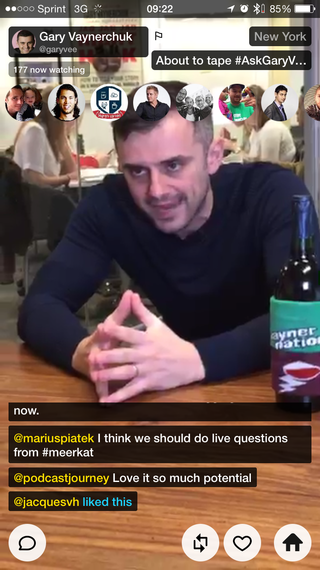 I have to say that this experience feels new and exciting. Yesterday's events and new users show that I'm not the only one that thinks so either. So back to the title of this post. All of this interaction on Meerkat is happening in real time and lives very much already inside of Twitter. It is the live broadcast video version of Twitter. No prerecorded delay. I could see these live events on Twitter cards as I scroll through my Twitter feed. Coming to life the same way video does on Vines as you scroll over them. Could you imagine what CNN or ESPN could do with this broadcast ability while covering live events. It is very early to tell if this app will survive long term and we certainly know this is not the first attempt at an app like this, but if I was twitter this is something I would not want to wait for Facebook or Google to acquire first. If there is anyone who know what happens when apps go viral at SXSW, coming up this month, it is Twitter.