While to the rest of the world, news of Rahm Emanuel's resignation and mayoral ambitions seems new-ish, Chicagoans have been hammered with nonstop news on the subject since Mayor Richard M. Daley announced that he wouldn't seek a seventh term a few weeks back.

There were the rumors that an announcement would come soon, various politicians saying they would bet good money that he would run, then rumors that it would happen by October 1. As of Tuesday, there were multiple unnamed sources confirming that Emanuel would step down as White House chief of staff on Friday.

Now, as we wait for President Obama's Friday morning announcement--where he will presumably announce Emanuel's resignation and declare adviser Pete Rouse the new chief of staff--some locals and non-locals are reacting to the news on Twitter. Some people are just flat-out tired of hearing about it, and make that pretty clear.

Warning to those people: this is just the beginning. We rounded up some funny tweets on the subject. Please add more! 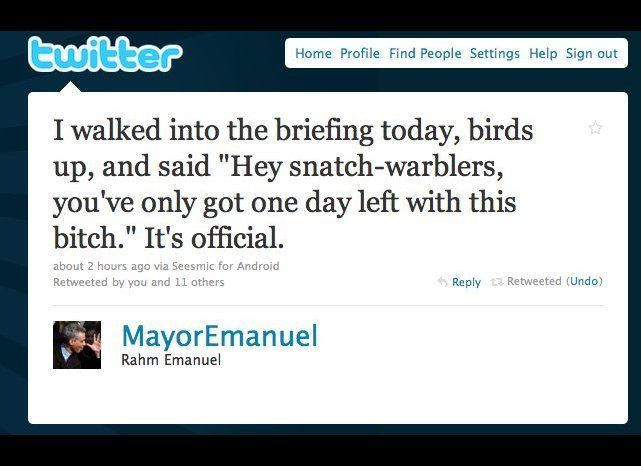