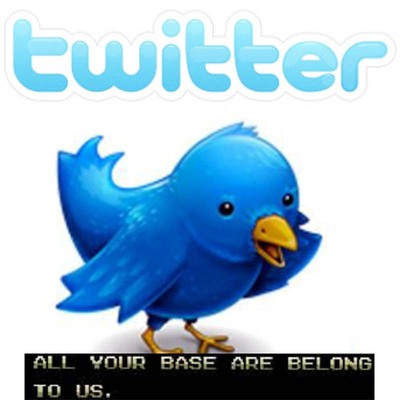 For those unfamiliar with Twitter, the micro-blogging and social networking site includes a feature called "Trending Topics". This a short list of the most talked - or "tweeted" - about topics on the site, more or less in real time.

A topic that was recently trending read:

This included such colorful and deep-plunging observations as:

But it's not the shallowness of Twitter's content that annoys me. It's the grammar.

It's not the "2" for "too" that's irksome, the weird pound sign prefix of the hashtag or the accordion-like mashing together of five different words; it's the incorrect use of the third person singular "is" instead of " are."

But this is basic stuff.

The truth is, Twitter isn't just prone to errors - it encourages them.

To get your point across within Twitter's 140-character limit you often have to cut corners in spelling and grammar. The climate for punctuation is especially harsh, with commas, apostrophes and periods often being ditched like excess weight on a struggling balloon.

Sure, online communication is all about expediency. (OMGROTFLMAO!) We regularly pack whole sentences into abbreviations, acronyms and little wordlets and, for the most part, we avoid mass confusion. Some sacrificial grammar-lambs might be necessary along with all that shortening. U stil no wat im tlkin abt rite?

Some people have extolled the virtues of the small space, saying it encourages creative solutions. There's even been talk of "Twitterature."

Shrink it, symbolize it, abbreviate and link it, and grammatical errors (and errors in general) become more and more acceptable. The effect is that tweets aren't just sometimes wrong, or often wrong, but generally wrong in some way. It becomes the norm - the language of the medium. Because we abbreviate rabidly and relegate punctuation to Grandma's Christmas card, errors become more acceptable in all aspects of writing. Is? Are? Who cares? It's Twitter!

Even as it takes on more importance as a source of information and as a place to share it, compared to other sources Twitter is held to a very different standard, both of veracity and of precision.

Its fans will say that Twitter's speed and crowd-sourcing potential outweigh its sloppiness, and that's probably true. As a place for the casual, dashed-off thought, maybe the rules of writing simply don't apply.

Insofar as language is about conveying meaning - about getting your point across - Twitter does very well indeed. It's fast, punchy and communal, capable of disseminating information with an agility that puts other services to shame.

The question is: how much form can you sacrifice before the written word becomes unpalatable? How much style can you strip from substance before you find yourself in Strunk and White's own personal hell?

I'm no Luddite, but to this day I refuse to write "U" for "you" in a text message (or on Twitter). It may be three times as efficient and universally understood, yet I resist it, as I suspect many do, because while shortcuts are handy and communication ever more casual, it always feels like a small but painful betrayal of style - a little surrender.