On Saturday night, in the magnificent crimson and cream surroundings of Emory's Emerson Hall, two magicians of music came to play -- Chick Corea and Bela Fleck.

Pianist Armando Antonio Zacone "Chick" Corea, now a spry 74 years old, has been stunning the world of jazz and fusion music since the release of his seminal recording Now He Sings Now He Sobs in 1968 with bassist Miroslav Vitous and drummer Roy Haynes. Corea has long been a restless innovator. He has explored avant garde jazz with collaborators like saxophonist Anthony Braxton, bassist Dave Holland and drummer Barry Altschul in the group Circles and joined in on iconic trumpeter Miles Davis' seminal jazz fusion recordings Bitches Brew and In a Silent Way. His collaborations with vibraphonist Gary Burton on such albums as Crystal Silence, could be considered a foray into jazz influenced chamber music.

In the early '70s, swayed in part by his admiration for fellow Miles Davis alumnus John McLaughlin's fusion group Mahavishnu Orchestra, Mr. Corea started Return to Forever, a rock/jazz fusion band that featured electronic music played at incredible speed , with stunning virtuosity and uncanny synchronicity. Mr. Corea's music has always had a Latin flavor, influenced by his ethnicity and his early association with Latin players like Mongo Santamaria and Willie Bobo. His musical compositions are a complex amalgam of Latin rhythms, European classically influenced lyricism and complex improvisations taken from the jazz canon. During his long and illustrious career, Mr. Corea has been nominated for over 60 Grammy awards and has won the prestigious award 22 times.

Bela Anton Leos Fleck is perhaps the world's most preeminent banjo player. He has mastered his instrument to previously unseen levels of proficiency and has been able to expand the possibilities of the sound he can create far beyond the traditional confines of Bluegrass music. His full name is an honorific to three classical composers -- Hungarian Bela Bartok, Austrian composer Anton Weber and Czech composer Leos Janacek. With this legacy it is not hard to imagine his fascination with classical music and his goal to somehow want to expand the boundaries of his instrument into this musical realm.

Mr. Fleck's first exposure to the banjo was listening as a child to the great Earl Scruggs play the theme to the television show The Beverly Hillbillies. He was smitten by Scruggs and he remains one of Mr. Fleck's acknowledged influences along with bebop saxophonist Charlie Parker and his current collaborator Mr. Corea. Mr. Fleck's contributions to the Bluegrass canon include his participation in such groups as Spectrum and New Grass Revival.

Always looking to push artificial boundaries, Mr. Fleck formed the successful crossover group The Flecktones, with bassist Victor Wooten and drummer Roy Wooten and the multi-instrumentalist Howard Levy. The Flecktones emerged as a super-group in the late 1980s, bridging the gap between progressive bluegrass, jazz and fusion and garnered several Grammy awards in the process. When not working with the Flecktones Mr. Fleck has continued his pursuit of expanding his musical pallet. Following his muse into classical music, Mr. Fleck won a Grammy in 2002 for best Classical Crossover Album for his work Perpetual Motion, a collaboration with the double bassist Edgar Meyer.

Eventually Mr. Corea and Mr. Fleck's paths crossed in 2006 and they recorded an album titled The Enchantment from that collaboration which led to an international tour. Fast forward to 2015 and Mr. Corea and Mr. Fleck have recently released a "live" album capturing some memorable moments culled from those concerts. The album is simply titled Two.

The casually dressed duo made their way onto the stage in front of a capacity crowd. The mood was exhilarating as the set started off with "Senorita", a Corea composition and the first cut on the new album. The two men had sheet music on their respective stands, but it was obvious it was more about unspoken communication right from the start. This was especially evident on the lead in to the songs. Mr. Fleck would throw out a phrase and Mr. Corea would answer it, neither quite knowing where the other would take them until they settled into the prepared music. The duo cruised through complex passages, building on a flurry of notes, navigating the shoals of their musical jet-stream, but somehow always ending precisely in unison and to the admiring astonishment of the audience who responded with appreciative applause.

Mr. Fleck's "Menagerie" came next. The complexity of the music and its polished execution could not entirely mask the distinctive sounds coming from their respective instruments, sounds that have identifiable roots. Mr. Fleck's banjo with its bluegrass inflections, and Mr. Corea's piano with his classical flourishes and Latin-inspired rhythmic approach, come from two vastly different musical worlds, but these two wizards made these variants work for the most part, to a surprising degree.

Mr. Fleck's "Waltse for Abbey" was written for Mr. Fleck's wife Abigail, herself an accomplished banjo player. Mr. Corea starts out with an elegant introduction to the piece, itself a beautiful pianistic miniature that commanded attention. The two are most lyrical here, playfully dancing around each other's musical ideas on this Americana inspired melody.

Some of the most daring musical excursions of the evening came when the two delved into the classical repertoire. Mr. Corea went to exaggerated lengths to erect a cardboard and duct tape music stand above on his piano as Mr. Fleck entertained the audience describing the timeline of the next piece of music -- a Sonata by Domenico Scarlatti. It was here where Mr. Fleck most impressed, as he showed his amazing ability to make his banjo conform and actually flourish within the rigors of this complex classical piece.

Mr. Corea is an accomplished classical player, but to see a banjo being utilized in such an unorthodox way was a delicious treat. Mr. Fleck's technique magically transformed his sound into that of a harpsichord, lending to the baroque sound of the piece that could hardly be imagined if not seen for oneself.

The set ended with a rendition of Mr. Fleck's bluegrass staple "Mountain." Here the tables were turned. Mr. Fleck was clearly in his wheelhouse performing with fluidity and appropriately emphasizing the rough and tumble, unpolished twang of this roots music. Mr. Corea, venturing into somewhat unfamiliar territory, seemed less at ease, doing his best to achieve the roots-y feel of this music. Mr. Corea's approach seemed more formulaic and for the most part lacked that genuine, honky-tonk feeling one comes to expect out of Bluegrass music.

The duo called for an intermission before returning for a second set. In between, Mr. Corea changed into a more relaxed red-plaid shirt, perhaps feeling the need to help get himself into mood of the bluegrass part of the program.

The two played an engaging Fleck composition before surprising the audience with a more familiar tune Stevie Wonder's "Overjoyed." Played with sensitivity and without too much embellishment, Mr. Corea commented after the piece: "I don't know anyone who doesn't love Stevie Wonder's music?" It is good to see that more and more prominent artists are incorporating some of Mr. Wonder's vast treasure trove of material into their repertoire, recognizing his music as a natural progression from the Great American Songbook.

Returning to the Classical realm Mr. Corea demonstrated why he is one of the most captivating pianists on the planet as he introduced a beautiful composition by the relatively unknown French composer Henri Dutilleux, whom he likened to Ravel and Debussy. The work titled "Prelude en Berceuse" (Lullaby) is also on the album Two. The audience was enthralled by the beauty of this short but powerfully melodic piece of music. Mr. Fleck started off with an ostinato line on his banjo that Mr. Corea played counter to in a delicate dance of notes. It was a tour de force in genre bending neo-classical music for banjo and piano.

The set continued with a Fleck Composition titled "Juno." Mr. Fleck related how about two years ago he was traveling and stranded in a Dallas airport when his son was born and so unable to attend the birth chose to compose this song, named for his son, to mark the event. 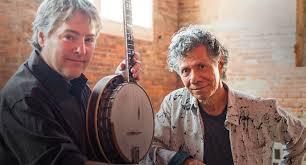 Mr. Corea created a gorgeous introduction to his composition "The Enchantment," which captivated the audience with its cascading harmonies. Throughout the evening you could see the mutual respect the artists shared, Mr. Corea often standing up and clapping in acknowledgment of Mr. Fleck's performance and Mr. Fleck seated, equally acknowledging his admiration of Mr. Corea's playing.

There was no doubt the audience came to hear some of Mr. Fleck's bluegrass influence and he brought it all to bear on the finale, a rendition of "Bugle Call Rag." Starting off the familiar three finger picked banjo part slowly, Mr. Corea's piano surprisingly took on the sound of a calliope. Mr. Corea encouraged the audience to clap to the easy beat, but when the two started to accelerate the tempo to a more rapid pace the two speedsters left the audience in the dust. While bluegrass is not Mr. Corea's forte, he was clearly more at ease on this piece adding notes and chords that gave the tune authenticity. After a thunderous applause the duo returned with an encore of two more songs.

After playing with a few musical ideas from the stage, the duo settled in on a sauntering, bluesy rendition of Mr. Fleck's "Sunset Road" where their jazz inclinations were most on display.

Mr. Corea's composition "Armando's Rhumba." was the parting finale with its swinging vibe and Latin inspired rhythms leaving the audience in a satisfied state of delight having witnessed a truly unique concert going experience. For those who missed this once in a lifetime event , the one consoling grace is that you can experience some of this magic on the duo's "live" performance on their latest two disc CD Two.