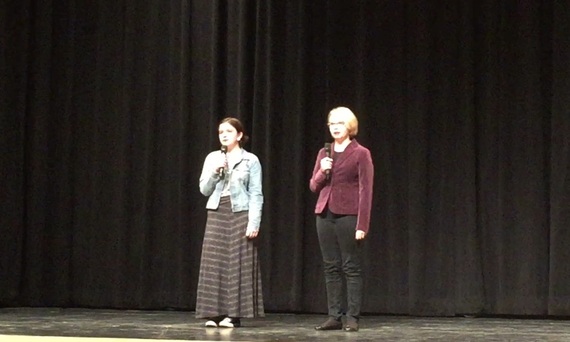 But you don't expect to be completely blown away by two Seventh Graders reading a poem they wrote themselves.

In fact, when you see "Poetry Recital -- Feminism Slam" in the program, you might even think, meh.

And then it happens.

Boys will be boys
She was asking for it
Are you sure you want to eat that?
You run like a girl

When I was 8 a boy told me I didn't know how to play soccer
Because I was a girl.
When I was 9 my dream of being the first
Female president was crushed
By a boy who told me
"Girls just aren't meant for that stuff"

When I was 7 I was told you ran like a girl,
I didn't know that was an insult.
When I was 10 my friend got kicked off the kickball team,
Even though she tried,
Because she played like a girl.
She cried.

"No spaghetti straps."
"Skirts must reach mid thigh."
I don't mean to pry,
But why?
These codes, they hurt my brain.
I didn't realize my shoulders caused you so much pain.
Is his education more important than mine?
There are schools that commit these actions,
Did you hear about that girl
She walked into school
they looked her up and down
and told her;
"You are a distraction"

"Hey baby,"
"Can't you just take a compliment?"
I'm sorry,
Do you think you're being a gent?
Well here's my two cents:
Women are people too,
People like you make me ill
And to think,
That some women would kill
To be like me,
To be free...
But are we?

We work ourselves tired,
And yet
These men are wired
To take our rightful credit.
They said that we have nothing to show,
but we do not know the name of the
15 year old girl
Who got the man
To the moon.
The women of the past have always been doomed.
They will never get their credit,
Thanks to history,
The true owners of these inventions
Will remain a mystery.

Flat stomachs,
Cheekbones,
Thigh gap.
Get rid of the fat.
Do you know what's sick?
The amount of women who are anorexic.
1 in 200.
Sound small?
Let me rephrase that,
1,594,500 women in the U.S. alone are sick because society puts these images in their heads.

So yes,
I'm a feminist,
I'm a feminist with pride.
And with every stride I will strive for their rights.
And if it sounds like I'm starting a fight
Then all right, I'll take it.
These men are telling us our cans and can'ts.
So I'm putting out a hand
For all the women who cannot
Stand with their voice,
Because they have no choice.
You will not silence us.

And I can assure you,
She wasn't asking for it.

All this dad could say was "wow." The place erupted, with parents and students coming up to them after amazed at their courage, their performance, and their talent. (Full disclosure -- though more like bragging -- one of these strong young ladies is my daughter).

These kids are going to do good stuff some day -- and may have already. To steal a line from Lin-Manuel Miranda, the world is gonna know their names.

This article originally appeared on RuddyBits.com

More:
Parenting Parentsdaughtersteenagersgender equality
Newsletter Sign Up
Raise the kind of person you'd like to know
Subscribe to our parenting newsletter.
Successfully Subscribed!
Realness delivered to your inbox