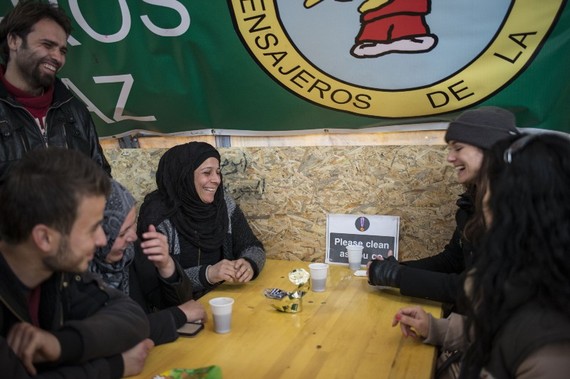 During a visit to Serbia with the International Rescue Committee this month, I met with refugees who told me about the dangers they fled and their hopes for the future. This family from Syria hopes to build a new life in Germany. Photo: Monique Jaques/IRC

A week ago, things were looking up. I was returning from a trip to Serbia with the International Rescue Committee (IRC) having followed the refugee route from Macedonia to the Croatian border. We spent time in train and bus stations, at parks where refugees camp, and with partner NGOs who are servicing the desperate population. I met with aid workers and refugees alike-- conversations and questions and tears and hope. On the plane home, I was looking forward to writing a piece about how the international aid community is doing a really marvelous job of keeping this vulnerable and war-weary population fed, informed, and safe as they transit to their new homes in Europe. The one caveat was this: our work will continue to succeed as long as the borders stay open.

What a difference a week makes. Borders are tightening and shutting all over Europe and the Balkans now, and particularly for Afghans things are looking dire. Hundreds of thousands of people could be stranded or left vulnerable to the exploitation of smugglers in the coming weeks. With the humanitarian crisis -- somehow --getting worse, I wanted to put a face on the Afghan Refugee.

The Man Who Served the U.S. Government

I was in a bus station in Adasevci, Serbia, a few miles from the Croatian border. Inside a warming tent I met a woman who spoke some English. I sat down with her and her sister. Her son --two-and-a-half, my own son's age -- orbited us, playing with a ball. She was beautiful, round-faced and somehow immaculately clean with a bespoke wedding ring I noticed when she put her hand on her belly -- she was seven months pregnant. I asked a question about the baby and our language skills stalled. We waved our arms, laughed -- no luck. She motioned to her husband a few tables away, and he came over:

How can I help? Sorry --I was over there talking with some people.

Your English is perfect....

Thank you. I was a U.S. Army translator.

I'll be honest -- that wasn't the direction I expected the conversation to take. He continued to tell me that he worked with the U.S. Army for eight years, first at an airport, then at a base, then on patrols. He speaks four languages, has an easy way about him, and is really funny. One imagines he was invaluable to U.S. efforts against the Taliban when he was beside us in the region.

But we left and he stayed behind. And when the Taliban re-emerged, he was targeted because of his work with the U.S. Army. He and his family will be killed in Afghanistan now -- so he fled.

Remember his pregnant wife? She trekked beside him 25 kilometers (15.5 miles) through the snow-covered mountains into Turkey to meet a smuggler to bring them to Greece. Their toddler son nearly froze to death, but his father carried him on his back until he found an abandoned barn and built a fire. When I spoke with them they were about three days from Germany if all went well. I thanked him for his service to the U.S. armed forces and wished him and his family well on their journey.

The day after I left, policies regarding Afghan refugees changed, and I have no idea if they made it. 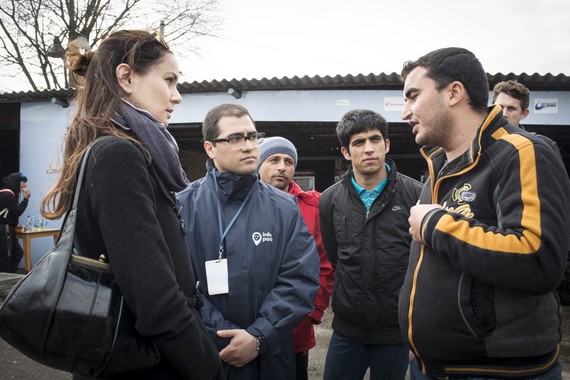 This Afghan student (right) was forced to leave his home after Islamic extremists approached him about joining their forces. It took him two months to reach Europe, where he hopes to find safety in Germany. Photo: Monique Jaques/IRC

The Man of Peace

I met this student at a refugee center in Belgrade, Serbia, standing with a group of young men waiting for tea. They were resting for a few days in Belgrade after a two-month journey from Afghanistan, hoping to make it to Germany by the end of the week.

He is Muslim. But when he was approached by Islamic extremists about joining them, he refused: That is not Islam, he tells me. They returned to recruit him a few more times, each time telling him he would be in danger if he did not fight with them. Finally, he fled rather than be forced into violence and ideology he rejects. Since he's left, they have returned to his home and told his family they will kill him when he returns.

He speaks decent English, says he will learn German when he arrives there. I ask him about what he hopes to do there, he tells me he wants to study. Once he's learned enough he'll be ready to go home and start a school -- as soon as it's safe. He bemoans the lack of educational opportunities in Afghanistan -- he had to go to Pakistan to be educated -- and he wants to lift his people up by teaching.

Days after we met, many Balkan countries began refusing entry for all Afghans.

In the rhetorical storm of libel being leveled against some of the refugees -- particularly the Afghans this past week -- let's consider putting some human faces on this population. Afghanistan is a death sentence for the two men I met --they are refugees in every sense of the word and yet thousands like them are being refused refugee status. These are men of ambition, intelligence, and character who would be an asset to any country who gives them safe harbor.

You can find out more about the IRC's work in response to the refugee crisis here.

A version of this story was also published on the IRC's Medium publication "Uprooted," which keeps the spotlight on the individual human beings behind the tragic numbers in this global refugee crisis.