"We've come through panics, Depression, floods, strikes, wars and more, and there's something here that seems to hold us together. There's a spiritual something that always sees us through, and we must never lose that.

"So remember my friends, that even though things are a little wrong right now, there's always that chance of making them right."

George M. Cohan, as
President Franklin D. Roosevelt,
Fourth of July speech in
I'd Rather Be Right

On June 6th, they buried Beau Biden, an American hero. Biden expressed his patriotism by living his ideals as a loving family man, an attorney, military officer in the Judge Advocate General Corp, an Iraq War veteran and a politician. Biden's work focused on the underdogs - whistleblowers, victims of domestic abuse and of mortgage foreclosures. 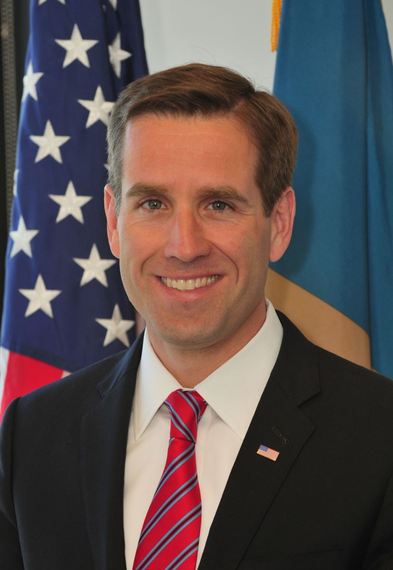 This Fourth of July, 2015, marks the anniversary of acclaimed entertainer George M. Cohan's birth in 1878, and the anniversary of biopic Yankee Doodle Dandy's debut. The film, which the American Film Institute named one of the top American films of all time, chronicles the life of Mr. Cohan, who showed his patriotism through song, dance and drama.

How could the lives of these two men, seemingly so disparate in time and detail, be relevant together? Why do we even care about Cohan and his work, today in the 21st Century? Surely, we've moved on from that outdated stuff! Right? Wrong!

While circumstances were different in Cohan's day, the spirit of American unity along with pride and respect for our flag and the importance of character are applicable today, as seen in our response to the death of Beau and our outpouring of sympathy to the Biden family. We relate to them and to so many others who are patriotic, driven by integrity.

Surprising parallels marked the lives of Beau Biden and George M. Cohan. Biden was 46 years old; Cohan, 64 when they died. Biden and Cohan, both Irish-Americans honored by Presidents, were devout Catholics who died from cancer. Both men made serving their fellow Americans their professional lifework; they would strive to unite and rally us, despite cynicism and our other human foibles, to work for the common cause of a vibrant, healthy country.

Both men marked their lives by love - of family above all, then community and country. From their parents, they each learned to live their ideals of loyalty, integrity, trustworthiness, hard work, respect and caring for others, and both passed them on to their children.

They lived their values simply and humbly. Though Cohan's stage presentations were exuberant and elaborate, in personal life he was quietly unassuming.

Said Pres. Barack Obama at Biden's funeral, "In this reality TV age, especially in today's politics, if you're loud enough or controversial enough you can get some attention. But to make that name mean something, to have it associated with dignity and integrity is rare."

Gen. Ray Odierno (Chief of Staff, United States Army), who bestowed posthumously the Legion of Merit award on Beau Biden, also spoke of his character. "A man's character is truly revealed under the most extreme and stressful conditions. I was able to witness firsthand Beau's incredible character, one principled with deep moral and ethical roots.

"He understood the importance of maintaining trust with his fellow soldiers and with the public to gain justice, and with the victims he fought so hard for; with everyone he came into contact with, and he did it by smiling, listening and showing genuine compassion to all."

Perhaps the best measure of Beau Biden, though, is where he stood in the hearts of ordinary citizens, and they often expressed it in terms of his Dad, Vice-President Joe Biden. Said Wilmington (De) resident Bill Dowling, "To me, being outside this (funeral) service is not as much a political gathering. It's more like patriotism, being able to unify the people, even the most diverse of people. That's kind of what it's about. Pride in Delaware, pride in the United States. I've never met the Bidens, but I'm a fan. Joe Biden is a really good man."

If he had lived longer, who knows how far Beau Biden would have gone in his quiet, steady, pursuit to 'do the right thing' for his family, his community and his country! 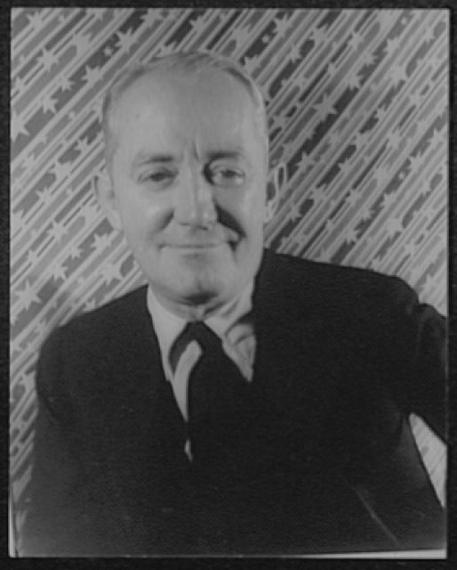 Ninety-seven years ago, when Congress declared war on the Ottoman Empire following the Germans' sinking of the Lusitania, Cohan said, "It seems it always happens; whenever we get too high-hat, too sophisticated for flag waving, some thug nation decides we're a pushover, all ready to be blackjacked, and it isn't long before we're anxiously looking up to be sure the flag's still waving over us."

Said Pres. Roosevelt to Cohan, "One thing I've always admired about you Irish-Americans: You carry your love of country like a flag -- right out in the open. That's a great quality."

When Cohan tried to enlist in the Army, he was rejected because he was eight years older than the maximum age limit of 30 years. When he protested, the Major on duty softened the blow, however; "Don't worry, Mr. Cohan, you're far more valuable at home than over there." And so, he wrote the award-winning rallying song, Over There.

A headline on Page One of the New York Chronicle read, Congress Calls "Over There" American Victory Hymn; George M. Cohan congratulated by Pres. Woodrow Wilson. 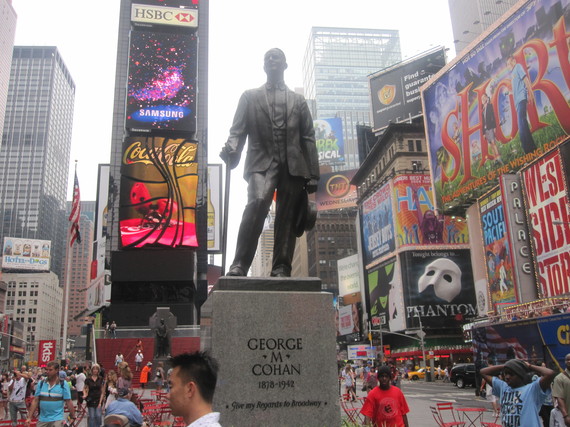 After an enviable career of hit after hit, Cohan retired for 10 years until, in 1937, he returned to Broadway to star in the Rodgers & Hart musical, I'd Rather Be Right, about Pres. Franklin D. Roosevelt. FDR was pleased that, instead of depicting the President in a wheelchair, Cohan made him the singing, dancing focus of a rip-roaring production, more in keeping with the crippled President's personality.

On May 1, 1940, Roosevelt called Mr. Cohan to the White House, and presented him with the Congressional Medal of Honor.

The inscription read
To George M. Cohan
for his Contribution
to the American Spirit
Over There
and
Grand Old Flag
Presented by Act of Congress

From the Congressional statement of May 28, 1936, "The report authorizing the gold medal included testimony from Representative Theodore Peyser of New York who supported the measure.

Peyser said, "Not because (Cohan) is a song writer, not because he is one of the most popular and foremost actors of the day, not because he has lent a helping hand to thousands, but because of his ability to instill in the hearts of the growing citizenry a loyal and patriotic spirit for their country and what it stands for in the eyes of the world."

Cohan, first entertainer to receive the Congressional award, protested that he was just a song and dance man; the honor should go to men who had given their lives for their country.

Roosevelt replied, "A man may give his life for his country in many different ways, Mr. Cohan, and quite often he isn't the best judge of how much he has given. Your songs were a symbol of the American spirit. Over There was just as powerful as any cannon, any battleship we had in the First World War. Today, we're all soldiers; we're all on the Front. We need more songs to express America. I know you and your comrades will give them to us."

Replied Cohan, "Mr. President, I've just begun to earn this medal; it's quite a thing...and I want you to know that I'm not the only one who's grateful; my mother thanks you, my father thanks you, my sister thanks you and I assure you, I thank you. And I wouldn't worry about this country if I were you. We've got this thing licked; where else in the world could a plain guy like me come in and talk things over with the Head Man?"

"Well, that's about as good a definition of America as any I've ever heard. Goodbye, Mr. Cohan, and good luck."

"Goodbye, sir, and good luck to you."

In I'd Rather Be Right, FDR gives a Fourth of July speech;

"We've come through a great many troubles since our first Fourth of July. We've fought other nations, we've fought among ourselves; we've had good Presidents and bad Presidents. We've come through panics, Depression, floods, strikes, wars and (chuckles), I don't know; there's something here that seems to hold us together. There's a spiritual something that always sees us through, and we must never lose that.

So remember my friends, that even though things are a little wrong right now, there's always that chance of making them right because this is a country where you can get up and talk about what's wrong...You know something? It doesn't matter whether I'm President or anyone else is; that is not important. There is only one thing that matters in this country, or ever will, and that's You!"

Roosevelt's words are as relevant today as they were in 1937; it is very much up to us to make our country right, to restore the American patriotism and unified vision that Beau Biden and George M. Cohan inspire.

We can start by making America, in all its aspects, the focus of our civic attention -- evaluating our own positions regarding loyalty, integrity, trustworthiness, hard work, respect and caring for others; we can work hard to instill those values in our children, and we can support others who profess the same character values.

Two more elements integral to our objective of 'making America right' are respect and trust. Not only should we elect officials who inspire those elements, we should also work to foster respect and trust in ourselves, our families and communities, and we should keep our eyes on the goal of making a better America - whether it is by our actions and words, or in the politicians we elect.

Yes, love marked the lives of Beau Biden and George M. Cohan; they gave all they had, and passed that love on. They embodied the best of America, and inspired us all to remember our best selves, as well. The values they shared were relevant in the past, they are today, and they will be significant down through the ages. Reclaiming them can help us to reclaim the Spirit of an Exceptional America.

The discrepancy in time between Congress' authorizing the Medal of Honor, and Cohan's receiving it was because Mr. Cohan, seemingly unhappy with the President's increasingly more progressive social views, had delayed receiving the award.